Central York advances to District 3 6-A semis with win over Governor Mifflin.

With a week off between the York-Adams League title game and his team’s first District 3 playoff contest, Kevin Schieler focused on keeping the Central York players’ energy up during their layoff. 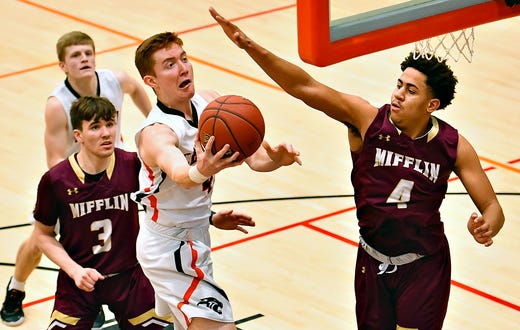 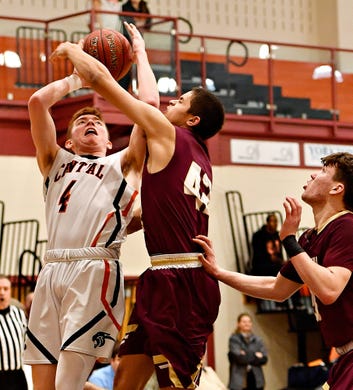 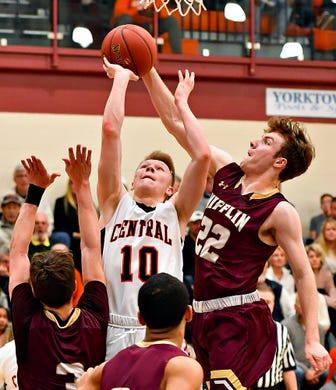 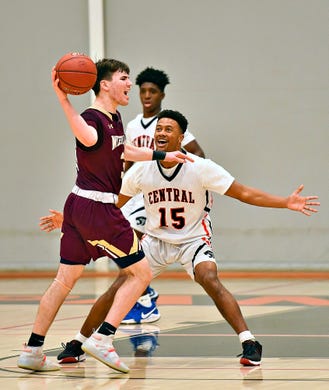 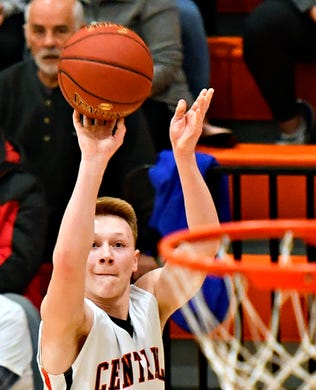 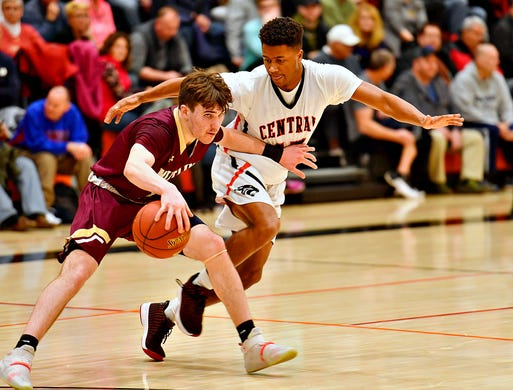 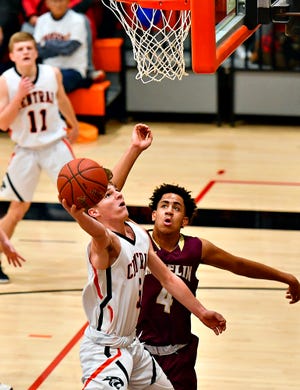 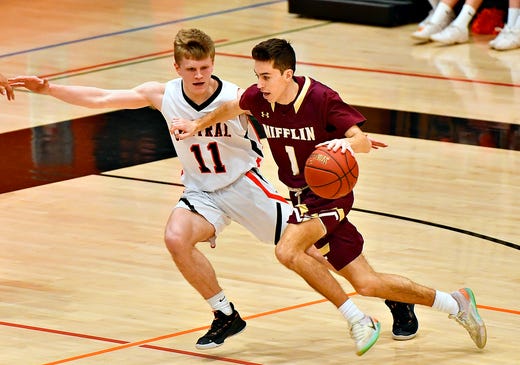 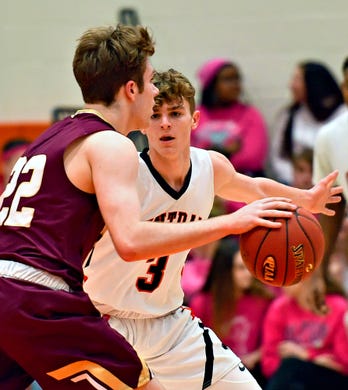 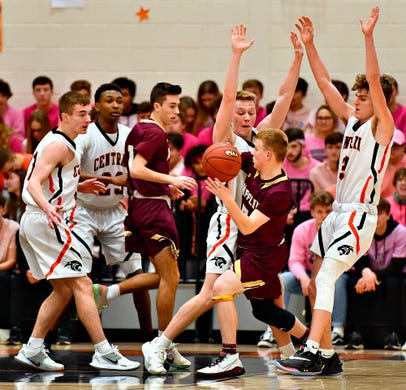 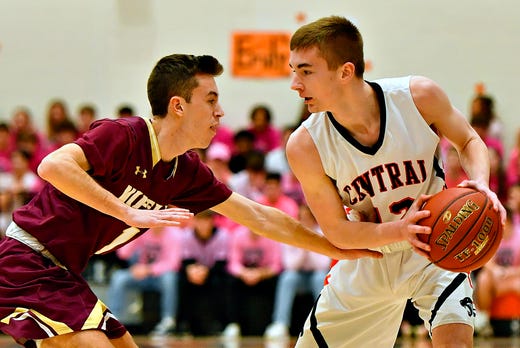 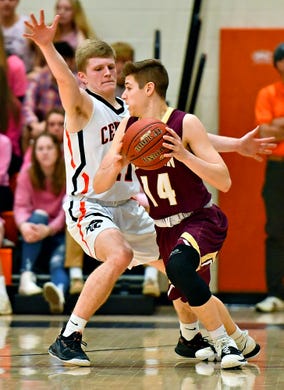 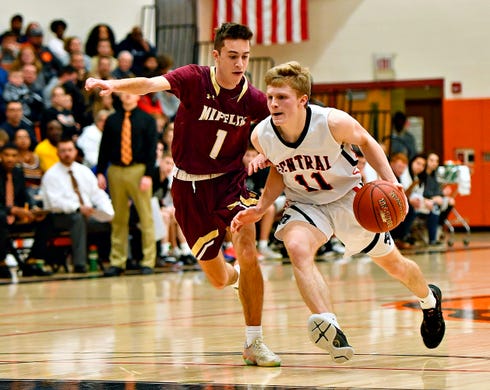 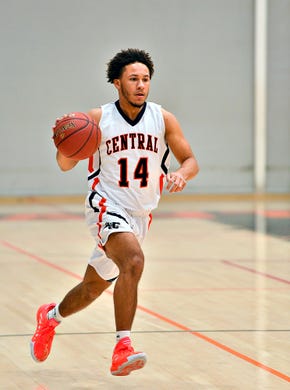 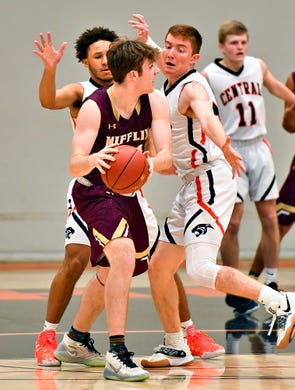 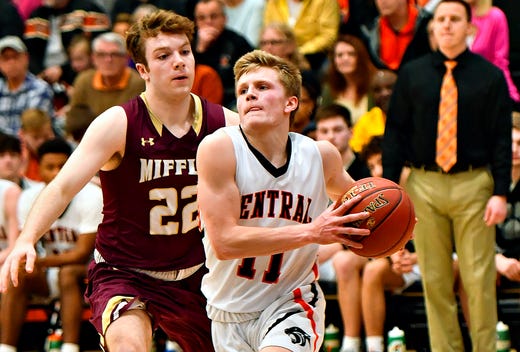 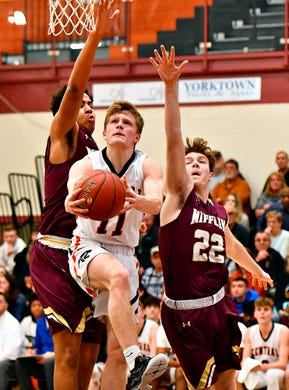 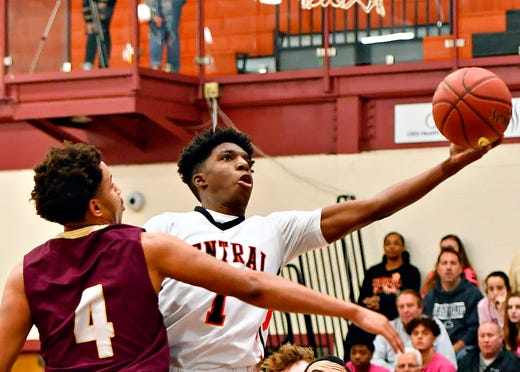 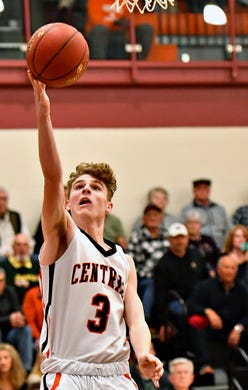 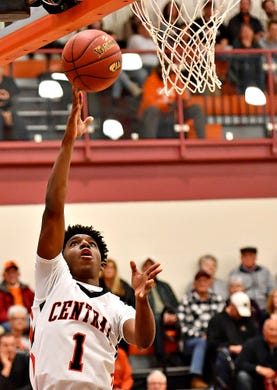 Early in Central York’s meeting with 10th-seeded Governor Mifflin (15-11), it looked like the second-seeded Panthers were still on their first-round bye.

The Mustangs opened the game on a 7-1 spurt, which forced Schieler to take a timeout and change the intensity level his team was playing at. 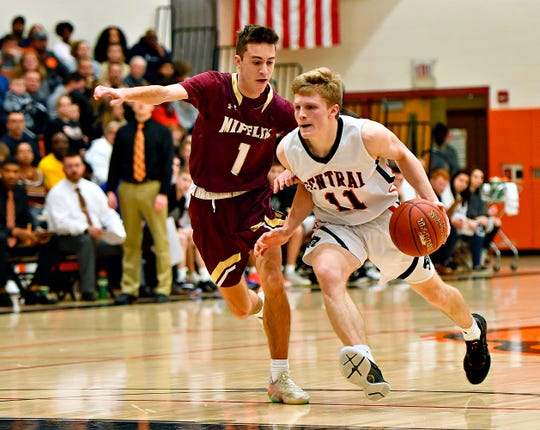 “We just told them to wake up,” Schieler said. “We had a lack of focus. I just think we had to wake up a little bit.”

That timeout hit the Panthers like a shot of espresso.

Central York (22-3) unleashed a 25-2 run that ran through the middle of the second quarter, led by senior Gabe Guidinger, who poured in 13 of his game-high 19 points before halftime.

The tremendous turnaround following the timeout created enough separation between the teams that Central never trailed by less than 10 points en route to a 56-46 victory.

“We came out expecting to punch them in the mouth without much effort, but they showed us that they’re a solid team,” Guidinger said. “So, we just had to come out and re-focus.”

Big first half: Central York extended a 10-point lead after the first eight minutes to 17 as it headed into the locker room. The Panthers held the Mustangs to five points in the second quarter and got a pair of big 3-pointers from guards Trey Sweigart and Mitch Saxton.

After halftime, it looked like both teams needed a wake-up call once again. Each squad managed just seven points, but the Panthers’ 17-point lead carried into the final eight minutes. 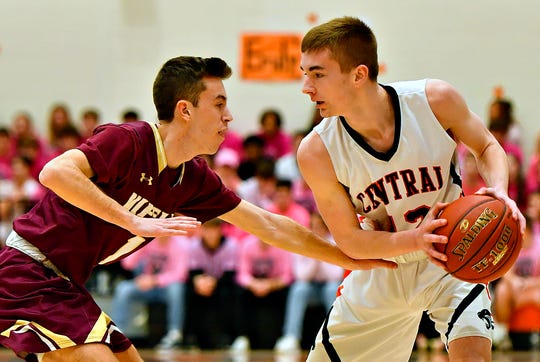 Governor Mifflin battled back late, but didn’t have the perimeter shooting necessary to complete the comeback. Bryce Harman and Gregory Suber each had 13 to lead the Mustangs in points.

Staying focused: Guidinger was the only Panther in double figures with 19, while Sweigart and Saxton added nine and eight points, respectively.

Turnovers and fouls allowed Governor Mifflin to get back into the game late and Schieler said that part of his plan in practice this weekend will be to prepare the players better for the pressure that comes in the clutch, final moments of the game.

“We gotta make sure we’re not letting the game take over our emotions and we’re keeping everything balanced and in check so next time around we can execute a little bit better,” Schieler said. 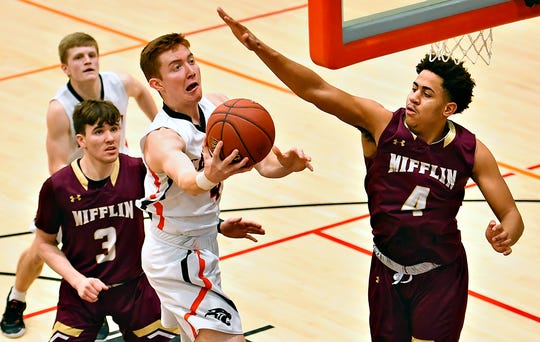 From the start: Central York’s next opponent will be No. 3 seed Reading (17-7). Reading advanced on Friday night with a 50-47 win over No. 11 seed Harrisburg. Tuesday's game will tip off at 7 p.m. Tuesday at Central.

Guidinger and Schieler both said that the team can’t afford to spot any more teams early leads if it hopes to continue advancing in the playoffs.

Whatever woke up the Panthers after Schieler’s timeout early against Governor Mifflin will need to be there again on Tuesday if the Panthers want to achieve their goals and reach at least one more title game this season.

“That little run we went on in the first and second quarter there was us doing the little things right in our game plan,” Schieler said. “We just gotta make sure we do that from the start on Tuesday night.”

Delone Catholic 62, Susquenita 30: At McSherrystown, the Squirettes had no trouble in their District 3 Class 3-A semifinal.

Brooke Lawyer led top-seeded Delone with 21 points and eight rebounds. The Squirettes improved to 23-1, while fourth-seeded Susquenita fell to 20-6.

Gettysburg 48, York Suburban 29: At Gettysburg, the Warriors beat visiting York Suburban for a third time this season to advance to the District 3 Class 5-A semifinals.

The Warriors will face another York-Adams rival (West York) in the semifinals at 7 p.m. Tuesday at Gettysburg. West York and Gettysburg split their regular-season contests and also shared the York-Adams Division II crown.

The third-seeded Bulldogs are now 21-4.

Twin Valley 73, Spring Grove 28: At Twin Valley, the fifth-seeded Rockets were no match for the fourth-seeded home team in a District 3 Class 5-A quarterfinal.

Spring Grove dropped into the consolation bracket. At 7 p.m. Tuesday, the Rockets will play host to Berks Catholic (16-10). Spring Grove is now 17-7. Twin Valley improved to 20-6.

Berks Catholic dropped into the consolation bracket with a 52-32 loss to No. 1 seed Mechanicsburg (23-2).

Eastern York 59, Wyomissing 27: At Wrightsville, the third-seeded Golden Knights cruised to the District 3 Class 4-A semifinals with a win vs. sixth-seeded Wyomissing.

Bermudian drops into consolation action at 7 p.m. Tuesday in York Springs vs. No. 8 seed Fleetwood, which dropped its quarterfinal on Friday vs. No. 1  seed Lancaster Catholic, 57-27. Lancaster Catholic improved to 23-3.

Christian School of York 38, New Covenant Christian 16: At York, CSY improved to 23-2 overall with a District 3 Class 1-A quarterfinal win.