The New Oxford boys' basketball team rallied for a pivotal York-Adams Division I win over Central York on Tuesday night.

Behind big nights from Abdul Janneh and Connor Jenkins, New Oxford defeated Central York in a game that could have an impact on the Division I title. York Dispatch

FacebookTwitterGoogle+LinkedIn
PHOTOS: New Oxford comes from behind for win over Central
Fullscreen 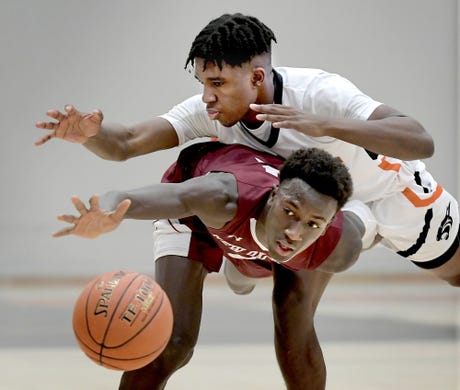 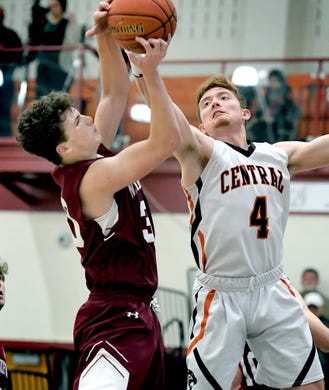 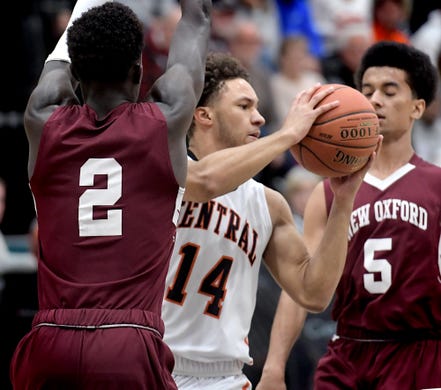 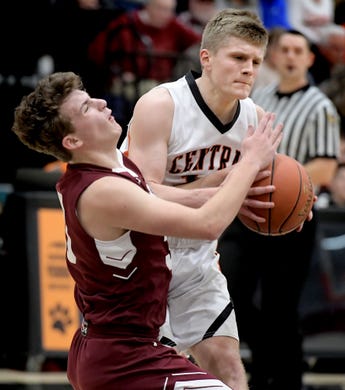 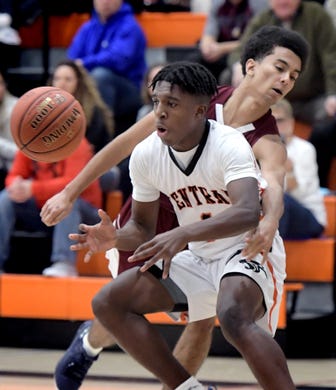 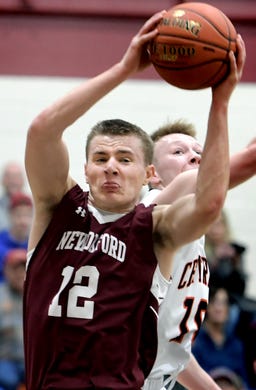 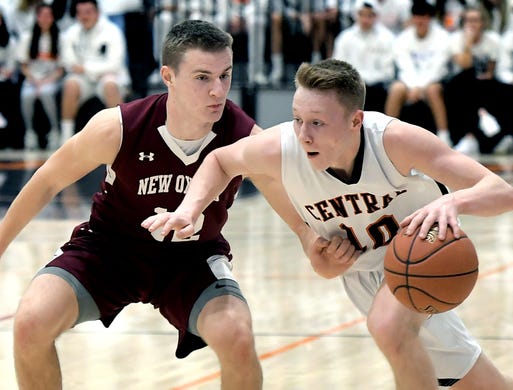 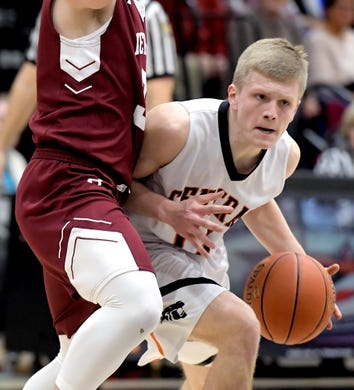 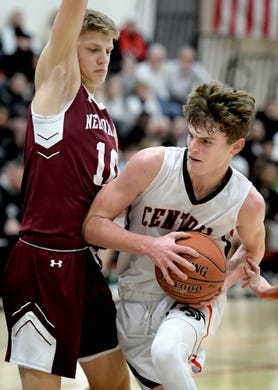 Not even finding out its team bus wouldn't start after the game could dampen the mood of the New Oxford boys' basketball team after Tuesday night’s contest at Central York.

The Colonials trailed after each of the first three quarters and headed into the final frame down by nine points. 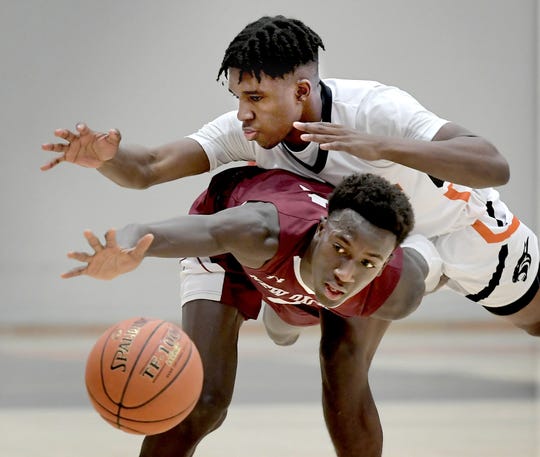 Down by four with just more than a minute left in the game, New Oxford got clutch shooting from a player they’ve come to count on this season. Junior Connor Jenkins followed a two-point shot with a clutch 3-pointer on a pass from senior Abdul Janneh to put his team up by one with 49 seconds remaining.

“It kind of felt like a blur honestly,” Jenkins said. “When you’re in those moments, you just play. You don’t really think as much. If you think, you do stuff you usually don’t do. You just play and you hope for the best.”

Central York called a timeout with 7.1 seconds left down by two and tried to draw up another buzzer-beating shot, just like it did against Northeastern last week. The Panthers got a clean look at a 3-pointer, but it bounced off the rim and Janneh grabbed the rebound and secured a pivotal 69-66 victory for the Colonials. 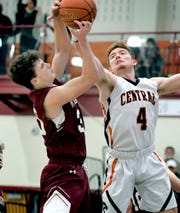 Never gave up: Central pushed its lead to 14 at its highest, but New Oxford continued to battle and gave itself a chance to make a late run. Janneh said the team continued to stress the importance of making stops on defense because the Colonials believe that their offensive ability is unmatched.

“We think no one can guard me in the league, no one can guard any of us,” Janneh said. “We were just trying to clear it out, make a move and create (a shot for a teammate) or just go score and we kept doing that and that’s what worked.”

Janneh and Jenkins were the Colonials’ only offense for most of the game. Jenkins led the team with 28 points and Janneh had 24. The pair were dominant from the foul line, combining to go 24 for 31. Overall, New Oxford shot 35 free throws, compared to 16 for Central. 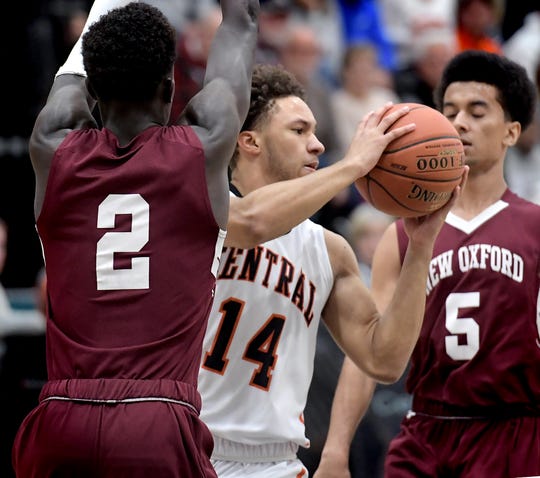 Block out the noise: The foul disparity was an issue for the Panthers’ players, coaches and fans throughout the game. Central senior Evan Eisenhart and coach Kevin Schieler received technical fouls for arguing with the refs and the crowd routinely booed calls by the officials.

“You can’t let that get to you,” Janneh said. “If it gets to you, you’re going to start thinking about it too much. You gotta block all that outside noise out and that’s what I did. Especially those free throws. Free throws were big this game so, just block out that outside noise and get buckets.” 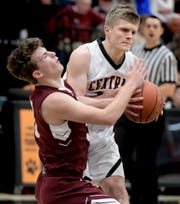 Central built its early lead on a big first half by senior Gabe Guidinger, who led the Panthers with 17 points.

Another big game: The win sets up another crucial contest for the Colonials on Wednesday night at Northeastern.

“It’s huge, it’s a huge confidence booster,” Janneh said. “Never won here before ever, so getting a win here, our mindset for the rest of this month is go 1-0 each day. We gotta go 1-0 tomorrow against Northeastern, another big one back-to-back. That doesn’t happen a lot, but we got another big one tomorrow, we gotta get that.”

Susquehannock 71, Kennard-Dale 53: At Fawn Grove, two of the top scorers in the Y-A League squared off. K-D's Carter Day, who leads the league at more than 25 points per game, pumped in 40 points. His team, however, fell to Jalen Franklin and Susquehannock. Franklin, who averages around 20 points per game, poured in 27 vs. K-D. Michael Staub (15) and Jon Lippy (13) also hit double digits for the Warriors. The Warriors improved to 8-7 overall and 4-5 in Y-A D-II. K-D dropped to 6-10 and 2-6.

York High 49, Red Lion 39: At Red Lion, the Bearcats trailed 31-28 heading into the final quarter, but rallied by outscoring the home team 21-8 to capture the Y-A D-I victory. Branden Mutunga led the Bearcats by scoring 16 points. For the Lions, Davante Dennis scored 13 points, while AJ Virata scored 10 points. York High improved to 7-3 in the division and 11-5 overall. Red Lion is 7-9 and 4-7.

York Catholic 61, Delone Catholic 49: At McSherrystown, freshman Luke Forjan led the Irish  by scoring 21 points, including an 8-for-9 night at the charity stripe. Also for YC, Ben Nelson-Moir scored 12 points, while Dylan Durbin knocked in 12 points, with four from behind the arc. For the Squires, Josh Sherdel scored 15 points, including three from behind the arc. York Catholic is now 8-10 overall and 8-3 in Y-A D-III. Delone is 6-11 and 6-5.

York Suburban 67, Dover 39: At Dover, the Trojans earned the Y-A D-II victory. Aidan Hughley led the Trojans with 15 points. Also for Suburban, Savon Sutton and Chris Spellman each scored 12 points, while Anthony Brown scored 11. For the Eagles, Austin Henze had 12 points. Suburban is now 12-3 overall and 7-1 in D-II. Dover is 2-13 and 0-8.

Northeastern 47, Spring Grove 39: At Manchester, the Bobcats captured the Y-A D-I victory. Andrew Brodbeck led the Bobcats with 18 points. Teammate Brandon Michael scored 12 points. For the Rockets, David Smith Jr. scored 16 points, including four from behind the arc, while teammate Diarmid Stewart scored 12 points. Northeastern improved to 13-4 overall and 8-2 in the division. Spring Grove fell to 1-14 and 0-10.