The Greyhounds are unbeaten on the year and have caught the attention of York County and the District 3 committee.

It wasn't until midway through the fourth quarter of Monday's game when York Country Day boys' basketball coach Corey Stiles finally relaxed on the sidelines. 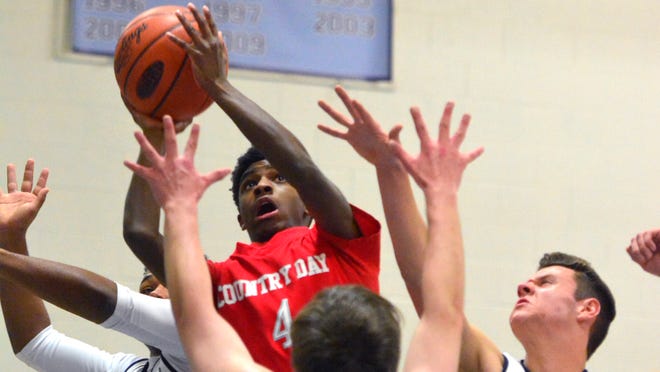 At that point, his Greyhounds held a comfortable 40-point lead over the Christian School of York and were well on their way to improving to 9-0 on the season. The fiery, young coach is in his fourth season with the YCD boys' team, his second as the head coach, so he's seen both the highs and lows of the program. He knows what it's like to be on the losing end of a lot of ballgames, so now that he has the players to return the favor, he won't stop hollering commands until he knows his work for the night is complete.

The Greyhounds don't have a storied past, but were quick to generate buzz around York County this season. It could be because of the exciting style of basketball that they play — full-court pressing opponents on defense and then transitioning into an up-tempo, run-and-gun offense. However, it's mostly because they just keep winning. It's not to say that YCD wasn't winning last year, but just not as much. The team lost nine games in 2014-15 and failed to qualify for the District 3-A playoffs. It led Stiles to believe that his team was on the cusp of finally breaking through.

"We were basically in every game," Stiles said about last year's team. "We only lost nine games last year, and in eight of those games, we lost by 10 or less. So, we were right there, we just needed one more player and, luckily, we got two more."

Adding the missing pieces: Those two players have made all the difference this year. Sophomore D.J. Hamilton and junior DeAireus Brown transferred to YCD from Northeastern in the offseason and were the missing pieces that Stiles and the rest of the Greyhounds were looking for. Together, Hamilton and Brown brought an athleticism that fit perfectly with Stiles' preferred style of play and helped alleviate the offensive pressure that was on standout junior Jordan Ray and the rest of the YCD shooters.

"With those two bringing their athleticism and their speed, now we can really get up," Stiles said.

Hamilton added: "We have people who can run and we have a pretty deep bench, so, us three, we can get out and run, and if I'm going, I know that these two are going to be to my left or right the whole time and teams can't keep up with us if we keep doing that."

The YCD school system consists of students coming from all parts of York County, so the Greyhounds have the benefit of not being restricted by school district boundaries on where their athletes come from. While it would seem to add some chemistry issues, because their players are not coming up through the middle school and junior varsity ranks together, that's not the case with YCD. The majority of the players have been a part of the school since middle school, so the cohesion was already there, allowing Hamilton to feel that the future was bright and only got brighter once he and Brown arrived.

"I was thinking District 3 championships and state championships on the line," Ray said. "... So I was really surprised and like 'Oh my goodness.' The future is bright for us."

Complete domination: The Greyhounds have lived up to their own heightened expectations so far, running the table and doing so in style. Rarely are teams keeping games within 20 points of YCD, and only once has a game come down to the wire, a 45-43 victory over Class AAA Big Spring. The Greyhounds are ranked first in the latest District 3-A power ratings.

"Every game, we try to put everything else aside, besides what we have to do that night and every night going forward," Brown said about not focusing on the power ratings. "That's the most important thing, is to play every game we got ahead of us and do what we do. That's what I think's most important. Personally, I don't pay attention to all that stuff."

Reaching new heights: Still, the District 3 playoffs are likely in the back of the Greyhounds' minds. It's a tournament that hasn't been kind to them in the past, making 11 all-time appearances and going just 6-12 in 18 games. They did reach the championship game in 2002, but lost.

However, this year's team could finally be the one that reverses those bad fortunes and takes the program to new heights.