Seven schools statewide filed appeals this week with the PIAA, hoping their basketball teams can avoid being promoted by the competitive-balance rule.

Seven schools statewide, including the Delone Catholic girls' program from the York-Adams League, filed appeals this week with the PIAA, all hoping their basketball teams can avoid being promoted by the competitive-balance rule. 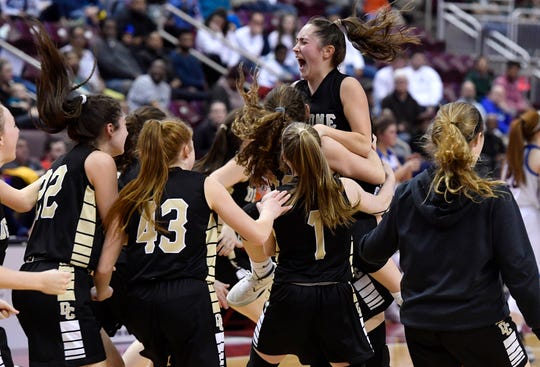 The Delone Catholic girls' basketball team celebrates its 2019 state Class 3-A championship. If the school loses a PIAA appeal, it will be forced to play in Class 4-A next season. (Photo: The York Dispatch)

The deadline to file was noon Friday.

Delone is coming off a Class 3-A state championship season in 2019 and made the 3-A state quarterfinals in 2020 before the season was halted by the COVID-19 pandemic.

Delone is among 15 schools that the PIAA intends to force into a higher classification for the next two seasons unless it wins an appeal. The competitive-balance rule targets basketball teams that had success in the state playoffs and added at least one transfer.

If Delone loses the appeal, it will have to play in Class 4-A next season.

The Squirettes were listed as having three transfers by the PIAA, but Delone officials contend that none of those girls should be considered transfers.

The PIAA executive staff will review the submitted information and respond to schools early next week, Lombardi said.

If the executive committee denies an appeal, that school can appeal to the entire PIAA board of directors later this month.

Of the 15 schools, six are from District 12, which includes Philadelphia Catholic League and public school teams.

The competitive-balance rule was enacted by the PIAA board two years ago, in part to quiet calls from public school administrators demanding a separate postseason tournament for private schools. Next school year — 2020-21 — will be the first time teams are forced to move up.

The rule impacts only football and basketball.

The PIAA formula awards four success points to teams that participate in the state finals, three to semifinalists, two to quarterfinalists or one for first-round participants.

Points are counted over two seasons. The PIAA then examines the rosters of teams that collected six or more points to see whether they also added any transfers. Teams must have both six or more success points and at least one transfer to move up.