After reaching the district playoffs in the previous basketball and football seasons, New Oxford boys' basketball hopes to continue winning this year.

Brayden Long and Abdul Janneh have done a lot of winning recently and they don’t want it to stop anytime soon.

The New Oxford seniors made the District 3 Class 5-A basketball playoffs last season after tying for second in York-Adams League Division I, and they reached the 2019 district football playoffs after the Colonials’ first winning season since 2013.

Just reaching the playoffs isn’t enough for the Colonials this season. Their sights are set much higher. 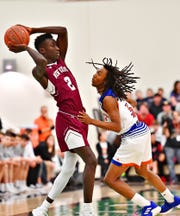 “We know where we were at last year, we came up short of what we wanted to accomplish,” Long said. “Winning the division, winning counties and once we’re on a roll there, win districts.”

Riding the momentum: Long and Janneh are hoping the momentum from their successful football season carries over to the hardwood. Playing into November for the first time meant less time for the New Oxford standouts to practice for the upcoming basketball season.

The New Oxford football team won a district playoff game after Long led the Y-A League in passing, while Janneh was the top receiver.

Although they weren’t able to make it to some of the open-gym practices held during football season, Janneh said the players have made the effort to ensure that once the season starts, the team is ready to get off to a fast start.

“Everyone has been in the gym a lot,” Janneh said. “When we don’t have open gyms, guys still get together and do a lot of stuff. Guys are doing extra stuff that is going to help us this season.”

A new coach: Adding to the difficulty of a limited amount of preparation, the Colonials have a new coach running the team.

Nate Myers became the New Oxford coach in August after the program’s former leader, Sean Bair, joined the University of Arkansas staff as a graduate assistant. A 1996 graduate of New Oxford, Myers coached the Hanover High program from 2007 to 2018.

Myers led the Nighthawks to their first district championship in 2011 and hopes to help guide the Colonials to their lofty goals.

One thing making the transition easier for Myers is the standout group of seniors who he will lean on to lead New Oxford this season. They helped New Oxford finish 20-8 overall a season ago and 11-3 in Y-A D-I.

“We have a very strong senior class,” Myers said. “They’re a very tight group. They’re a lot of fun. It’s been new, it’s sort of rejuvenated me. It makes my job so much easier when you have upperclassmen (with) good leadership,” Myers said. “It makes any coach’s job very, very easy.”

Becoming leaders: Janneh, one of those seniors and a Y-A Division I first-team all-star last season, was excited to take on the role of a senior leader for the Colonials this year alongside the guy who he spent the past few months setting records with on the football field.

“Me and Brayden have been playing varsity since freshman year,” Janneh said. “Learning from the guys ahead of us, we’re ready for that role.”

Outside of the seniors, Myers and the Colonials are expecting production from junior Connor Jenkins and sophomore Thomas Haugh, who have reportedly been impressive during preseason workouts.

With a talented group of seniors, a district-title winning coach and the experience from reaching the Y-A League tournament title game, the Colonials are ready to make a run this season. If they’re going to reach the heights they hope to, New Oxford will have to lean on its experience to continue its winning ways from the previous football and basketball seasons.

“We have high expectations for this season and big goals, so we’re just trying to meet those,” Janneh said.