The Gettysburg girls’ basketball team lost 31-23 to Palmyra in the District 3 5-A title game. The Cougars' coach is former Dallastown coach Mary Manlove.

The Cougars outscored the Warriors 14-4 in the third quarter en route to a 31-23 win at the Santander Arena on Friday.

"They’re disappointed, especially with the way the game was played," said Gettysburg head coach Jeff Bair. "At halftime, they felt good about what was going on. Disappointed would be the best word. Opportunities to win district championships don’t come along every year. ... It wasn't our night." 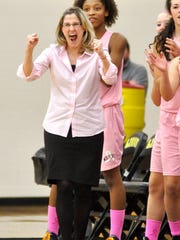 Mary Manlove, shown here coaching the Dallastown girls' basketball team, led Palmyra to the title. Manlove was fired as the Wildcats' coach after the 2015-16 season amid allegations of verbal, mental and physical abuse, but a later investigation cleared her of all accusations. (Photo: YORK DISPATCH FILE PHOTO)

The Cougars also have a York County connection in head coach Mary Manlove, who is a York Catholic graduate and a former head girls' basketball coach at Dallastown.

Manlove, whose Cougars played before Dallastown's Class 6-A title game, coached the Wildcats to a 114-77 record in seven seasons. Manlove was fired as the Wildcats' coach after the 2015-16 season amid allegations of verbal, mental and physical abuse, but a later investigation cleared her of all accusations.

Gettysburg struggles on offense: The No. 3-seeded Warriors (22-6) made only one 3-pointer in the loss. They entered the contest making five 3-pointers a game.

"That was just two defensive teams getting after it," Bair said. "You have to be happy with the defensive effort we put up. We just couldn’t manufacture enough points."

Anne Bair led Gettysburg with 14 points. She made five two-point field goals and all four of her free throws.

Cheyenne Proctor, the team's top player, played through an ankle injury and scored only two points. She averaged 14.4 points per game, which ranks third best in among York-Adams League players, entering the match-up.

"We had (Proctor) playing on a bum ankle and Anne playing with a bum ankle," Jeff Bair said. "You just don’t know how much that affected anyone. ... They did what they could do."

PIAA playoffs: Gettysburg's season isn't over with the loss. The Warriors now enter the state tournament as the No. 2 seed from the district. They will play the No. 4 seed from District 1 on Saturday, March 9.

Palmyra will play the No. 6 seed from District 1 on the same day. The two teams are on opposite sides of the bracket.

Sites and times for the games are to be determined.