Following Spring Grove's girls' basketball loss to Palmyra, Troy Sowers was unhappy with the officiating, saying he felt the game was "stolen" from his team. 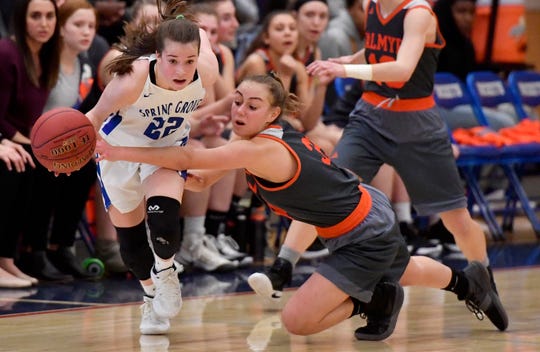 Ella Kale of Spring Grove gets a key steal from Palmyra's Zoe Smith in the final seconds of the District 3 Class 5-A basketball quarterfinal, Friday, February 22, 2019. John A. Pavoncello photo (Photo: The York Dispatch)

A single judgement call can alter the outcome of a game. It’s a part of sports.

However, what happened Friday night at Spring Grove High School, according to Rockets girls’ basketball head coach Troy Sowers, was outside the norm.

In fact, Sowers said his team’s District 3 Class 5-A quarterfinal game against Palmyra was “stolen” from the Rockets by the officials.

Palmyra, the No. 12 seed in the tournament, defeated the No. 4-seeded Rockets 43-41 following a bizarre ending. Sowers disagreed with three refereeing decisions, two of which came in the final second.

“It stinks for my girls, because we battled back, and that game was stolen from us,” Sowers said. “The fans know it. I know it. It is what it is. I normally don’t cry, but I don’t think this is a cry. This is a fact.” 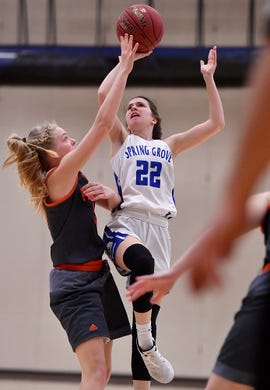 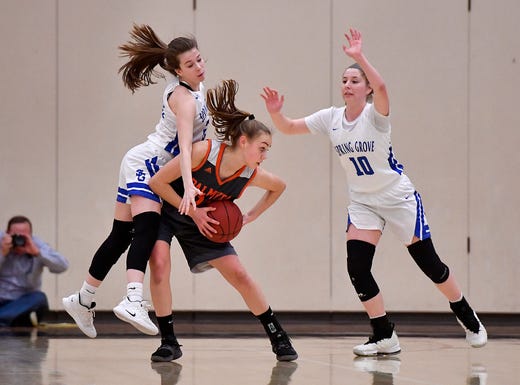 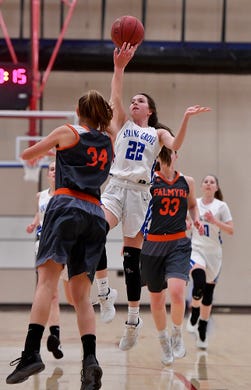 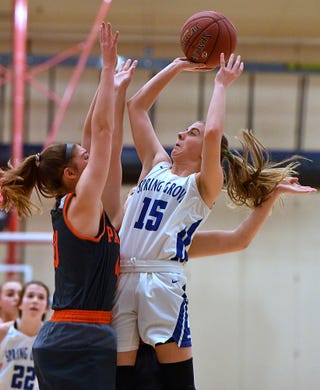 Lexi Hoffman of Spring Grove shoots over the defense of Palmyra's Katelyn Becker during the District 3 Class 5-A basketball quarterfinal, Friday, February 22, 2019. John A. Pavoncello photo The York Dispatch
Fullscreen 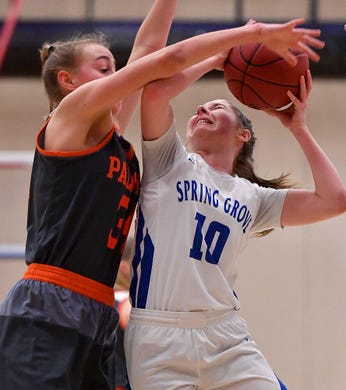 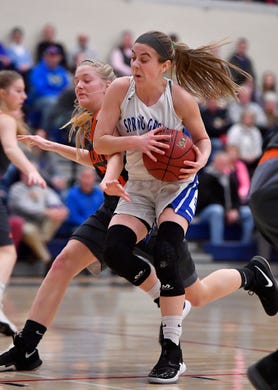 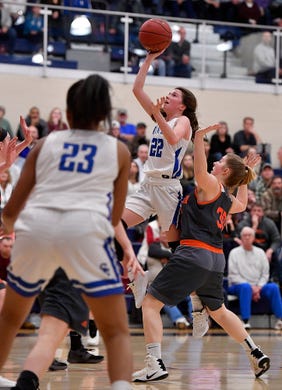 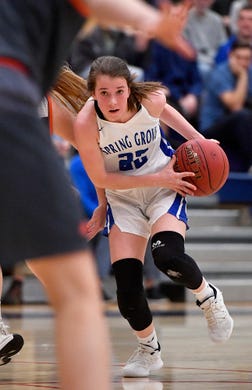 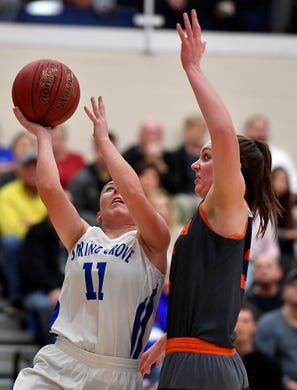 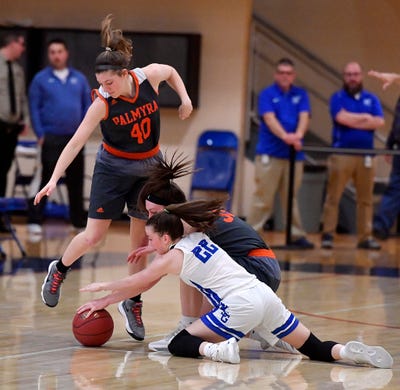 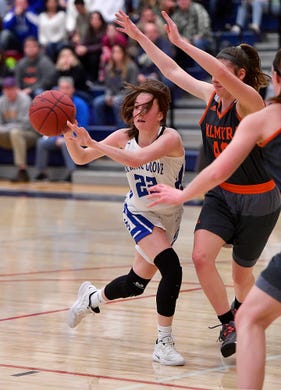 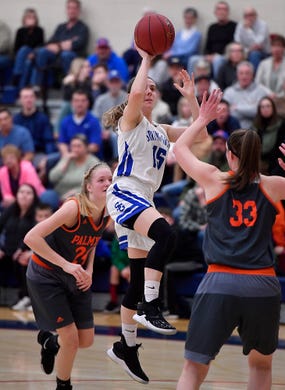 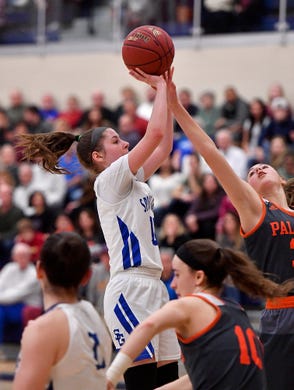 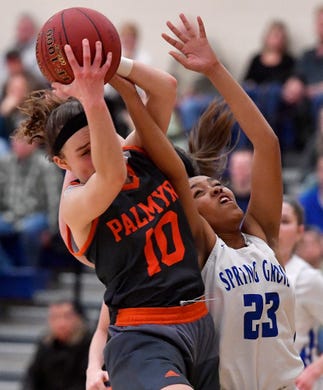 Palmyra's Amelia Baldo and Hylin Sorrell of Spring Grove battle for a rebound during the District 3 Class 5-A basketball quarterfinal, Friday, February 22, 2019. John A. Pavoncello photo The York Dispatch
Fullscreen 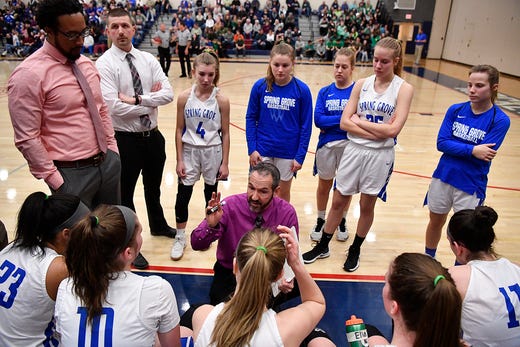 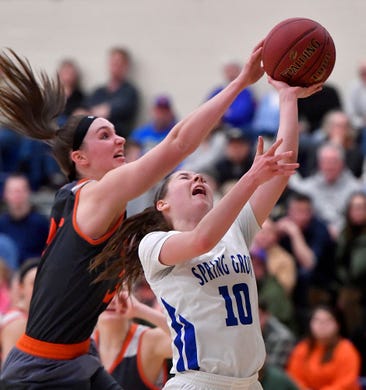 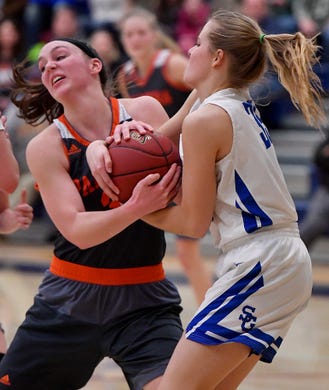 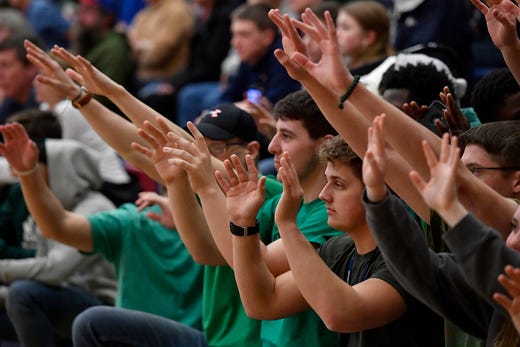 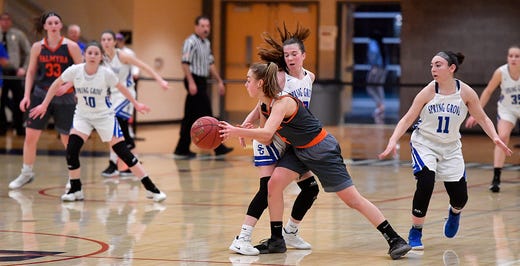 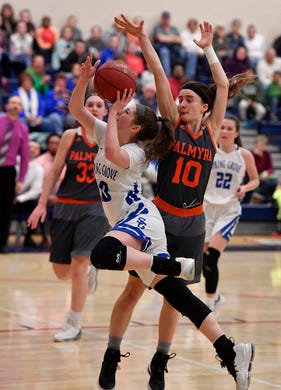 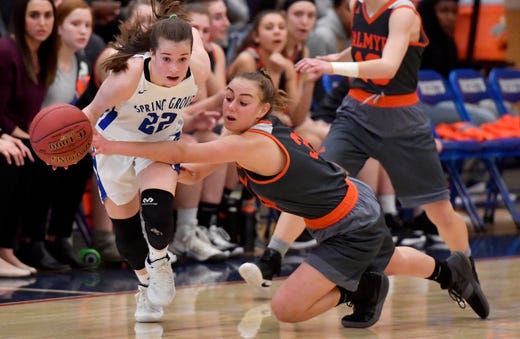 Final minute: The Rockets trailed by four points with less than a minute remaining. Sophomore Ella Kale stole a Palmyra pass, which led to Haley Wagman drawing a foul and making both free throws with about 30 seconds left.

Moments later, Palmyra turned the ball over again, as the Cougars’ inbounds passer held the ball for more than five seconds. Wagman then made a layup with about 20 seconds remaining to tie the game, 41-41.

Amelia Baldo then missed two layups in the final five seconds as time expired. As Spring Grove’s players sprinted to the sideline to celebrate their comeback and to prepare for overtime, the Lancaster-Lebanon officiating crew gathered at the scorer’s table after Palmyra head coach Mary Manlove argued that a whistle had blown prior to time running out.

One of the officials inadvertently blew his whistle in the loud gym, causing most of the players on the floor to stop playing, though the clock continued to run. The officials decided to put six-tenths of a second back on the clock and give Palmyra the ball underneath its basket.

Wagman ties the game. Baldo then misses two layups. Palmyra coach and players arguing a referee called a foul on the second layup. The clock didn’t stop, and the ref didn’t signal a foul. It did sound like he blew his whistle, tho it was very loud in gym. They are discussing now. pic.twitter.com/DZJTnAFc0s

“He said he inadvertently blew his whistle,” Sowers said. “That’s why they got (six-tenths of a second) left on the clock. For no reason, he blew the whistle.”

The inbounds pass from Zoe Smith was on a bounce to Baldo, who caught the pass on her right hip, transferred the ball to her left hand while taking two steps and made the layup before the buzzer sounded in the gym.

Immediately, the officiating crew ran off the court, as Palmyra’s players celebrated. A perplexed Sowers, along with his assistants, then tried to follow the crew to plead their case that six-tenths of a second isn’t enough time for the type of basket Baldo made to count. Sowers couldn’t make his case, however, as the crew had already left the court.

They decided to put 6 tenths of a second left. Baldo made a layup to win the game at the buzzer for Palmyra. SG head coach Troy Sowers objected to the call, but the refs ran out of the gym. Here’s the video. The clock didn’t start until right before the ball left her hands. pic.twitter.com/Y38cxay2Hr

“You can’t do that at this level,” Sowers said. “(The officials) must be feeling a certain way, because they knew they blew the game with an inadvertent whistle. Then they give them a bucket with (six-tenths of a second) left. Maybe they don’t care. Maybe they’re just not good. I don’t know.”

Video of the final basket: Sowers said multiple times in an interview with reporters after the game that his objection of the made basket was that a player can’t “catch, dribble and shoot the ball” with six-tenths of a second remaining. Video of the play shows Baldo didn’t dribble the ball, meaning it is conceivable that she made the basket within the allotted time.

However, the video also shows the clock operator didn’t start the clock until Baldo had gone up with the ball in her left hand — after she caught it off her right hip and took two steps while transferring the ball to her left hand. The clock, which started late, shows three-tenths of a second remaining when the ball leaves Baldo’s hand.

They put 0:00.6 back on the clock due to an inadvertent whistle.

In this slow motion video, it looks like Baldo caught the pass on her right hip, transferred it to her left hip, took two steps and shot a layup. The clock didn’t start until she had gone up w her left hand. pic.twitter.com/t6Vaab6xk5

“That’s insane. They should be talking to each other that it has to be a quick catch-and-shoot,” Sowers said. “… “I’m OK with losing a game if you lose it on a judgement call. But (how we lost) is not how any team should lose. If (Palmyra) would’ve lost the game like that, I would be feeling bad. You shouldn’t take it upon yourself as a referee to make the outcome yours with an obviously blown call.”

Can Spring Grove protest?: In the video, neither of the two referees in the frontcourt signaled a made basket. If the referee at halfcourt, who is out of view in the video, also didn’t signal a made basket, Sowers believes the game should still be tied.

According to Section 2, Article 4 of the 2018-19 National Federation of State High School Associations basketball rules, the game ends when the officials leave the “visual confines of the playing area.” If none of the three officials signaled a made basket, Sowers believes that means they left the court with the game tied 41-41 with no time remaining in regulation.

“You’d just like the teams to decide the outcome instead of a referee who's struggling, or three who are struggling,” Sowers said. “I would’ve liked to have played four more minutes to let the girls decide it on the floor.”

Sowers said in a text message following the game that a District 3 representative said Spring Grove was not able to protest the contest.

District 3 director of communications Rod Frisco said in a text message Friday night that “protests are rare and generally discouraged by (the) PIAA.” However, Frisco said he is “unfamiliar” with the process of a possible protest.

Incorrect call on 3-pointer: The last second of the game wasn’t the only objection Sowers had of the officiating.

Late in the third quarter, Baldo made a 3-pointer that bounced up in the air off the rim, hit the wire above the basket and fell through the hoop. The crew allowed the 3-pointer, even though the shot should not have counted since it hit the wire.

“There are three officials out there, and everybody said, ‘I wasn’t looking,” Sowers said. “... I’m not arguing a judgement call. I’m arguing just a normal refereeing call at the second level of districts. How do you not see the ball hit the wire when it shook a lot?”

While there is no way to know how the rest of the game would have gone if the officials made the correct call on the 3-pointer, Sowers said those extra three points made a difference.

“It changes (the game) dramatically,” Sowers said. “A four-point game that turns into a one-point game is a monster difference. … When two good teams are battling, those obvious calls should be called (correctly). I’m not arguing a judgement call, because refereeing is hard. Hitting a wire is not a judgement call.”

Consolation round: Spring Grove (19-8) now moves into the consolation bracket. The Rockets have already clinched a PIAA playoff berth. They will play at home against Mechanicsburg (19-5) on Tuesday at 7 p.m.

“You want to be tough, but you can only be so tough when something like that happens,” Sowers said. “(They) are high school aged girls. I’m 49 years old. I’ve seen atrocities. I don’t know any worse than that, though. I don’t know if I’ve seen such a blatantly bad call like that. But I think as an adult, I’m able to take it a little bit better. If I’m hurting this bad, I can’t imagine what the girls feel like, because they gave their hearts and souls out there.”