Dayvon Cortez is emerging as a vital role player for the York High boys' basketball team in his first season after transferring from West York.

Dayvon Cortez went from being the top scorer at West York to a bench player at York High after his family moved.

For many players, that’s not an easy change, and Cortez admitted he struggled with the transition to start the season.

“Coming over from West York, it was different because I was the main player along with Alex (McClellan at West York),” said Cortez, who led the Bulldogs last season with 15 points per game. “I’m used to being in the whole game and coming out for short periods of time. I came here, and I wasn’t starting and I wasn’t getting as much time as I wanted.”

In a mid-December game against Central York, the Bearcats were sluggish in the second quarter until Cortez, a senior, came off the bench and scored seven points to propel the Bearcats to a 35-23 halftime lead.

Before the game, York High head coach Clovis Gallon Sr. assured Cortez about what his role would be by the end of the season.

Halftime | York High 35, Central 23. Here’s a nice bucket by Dayvon Cortez, who came off the bench in the second quarter and scored seven points. pic.twitter.com/YLqml7CJ18

“He’s definitely gained more confidence, not just in himself but within the system," Gallon Sr. said. “We put a lot of pressure on our kids. There are big expectations on them to compete at a high level on offense and defense. He struggled at times with being held to that standard. Now he’s at a space to compete on offense and defense and make plays. In the game (against Dover), he was in a position to make plays, and he did that.”

Performance vs. Dover: Cortez scored at least three points in each quarter, scoring most of his points on drives to the basket.

“I played against Dover for the last two years at West York,” Cortez said about the York-Adams Division II rivals. “I knew I could score on (Dover), so I just told myself I was going to take advantage of my opportunities.”

Gallon Sr. said having an experienced player such as Cortez as a scorer off the bench is helpful.

“He is a legit kid who can confidently put the ball in the hole at all three levels,” Gallon Sr. said. “He can score at the basket against small guards, he can shoot and make free throws and he’s a good rebounder. He’s not afraid of the moment to make the right basketball play.”

Spreading the wealth: Clovis Gallon Jr. led the Bearcats with 26 points vs. Dover, and Marquise McClean made his return from a hip injury to score nine points. Gallon Jr. said Cortez, combined with starting point guard Jaevon Woodyard, provides a vital duo for the Bearcats.

“We have a lot of depth, and a lot of teams don’t have that,” Gallon Jr. said. “Dayvon is a key player to us. He’s very helpful. We basically have two starting point guards on the team. Once one subs in, it’s like we aren’t losing anything.”

Gallon Sr. said Cortez, Woodyard, Cameron Gallon and Branden Mutunga have all helped take pressure off Gallon Jr. and McClean, who are scoring around 20 and 17 points per game, respectively.

“We know what we are getting from Clovis and Marquise,” Gallon Sr. said. “When you have (the others) play to their capabilities, it’s really hard to defend and give attention to all of them.” 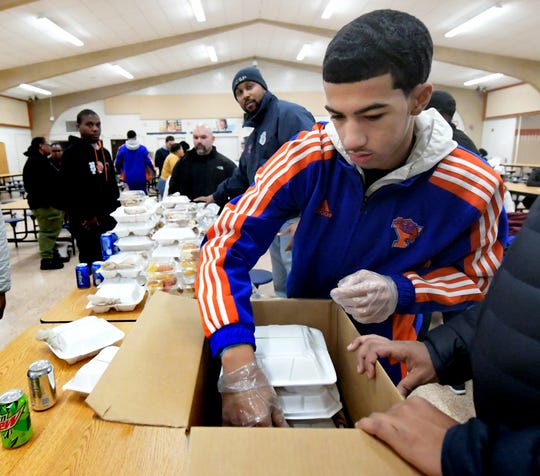 Cortez’s development: Cortez was at York High as a freshman before spending his sophomore and junior seasons at West York. The little things about learning his role on the team made the transition difficult, Cortez said.

“It was knowing when I should shoot, when I should pass and little things like that,” Cortez said about the adjustment period early in the season. “I’m getting the hang of it now. Early on, (Gallon Sr.) told me to stick with it and keep fighting, and I came through.”

Gallon Sr. said Cortez’s biggest adjustment when he transferred from West York was learning to play off the ball. After watching film of Cortez from his junior season at West York, Gallon Sr. knew Cortez would have to adjust his play style from a “ball-dominant guard” to one of many pieces in York High’s nine-man rotation.

“The biggest adjustment for Dayvon was that he doesn’t have to dominate the basketball here,” Gallon Sr. said. “He has to pass, move without the ball and score when he has his chances. He’s learned that with time.”

Cortez knew coming over from West York that he wouldn’t be one of the top two players. That doesn’t mean, however, that he didn’t think he could contribute, just as he eventually did against Dover.