A varsity starter since his freshman season, Pete Capobianco, a standout infielder for Dallastown High, verbally committed to play at Gardner-Webb. 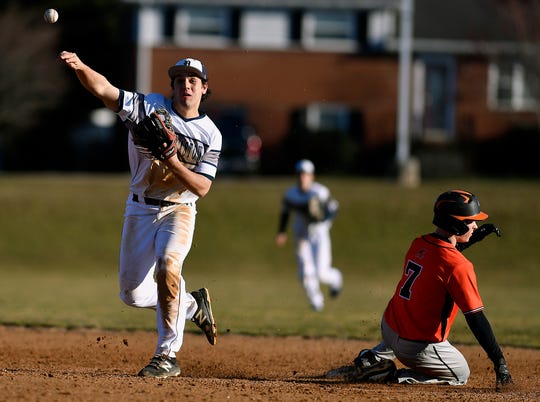 Pete Capobianco is seen here making a throw from his shortstop position. The Dallastown High standout has verbally committed to play NCAA Division I baseball for Gardner-Webb. (Photo: The York Dispatch)

Pete Capobianco never thought he would be here when his high school career started.

The Dallastown High rising senior, whose standout varsity career began as a freshman after the team suffered multiple injuries, has become the latest Wildcat to take the next step in his baseball career.

Monday, Capobianco verbally committed to NCAA Division I Gardner-Webb University in North Carolina, something he dreamed of since he started playing the sport.

Excited to say that I have committed to Gardner-Webb University to further my baseball and academic career! #runninbulldogs

“It’s kind of crazy to think that a couple years ago I was just a freshman on a 10-senior varsity team going to a state championship game, and now I am committed (to Gardner-Webb) going into my senior year. It feels like it was just yesterday,” Capobianco said.

A long journey: While it may feel like the past three seasons flew by, the process of landing at Gardner-Webb wasn’t easy for Capobianco.

After he batted .344 during his freshman season, colleges started showing interest. The Wildcats’ infielder followed up a stellar first season with batting averages of .294 and .304 in his sophomore and junior seasons, respectively, and D-I coaches intensified their pursuit.

This summer, the 6-foot-2 Capobianco traveled to Georgia, Ohio, New Jersey, South Carolina and Virginia to play in showcase tournaments for college scouts. Capobianco said he played multiple games where there were hundreds of college scouts in attendance. The pressure, he said, can be overwhelming.

“It gets a little nerve wracking, but you learn to block it out,” Capobianco said. “Just have fun playing the game you’ve always played.”

The right fit: Capobianco had multiple conversations with the Gardner-Webb coaches and decided to take his visit to the university on Aug. 10. Once he got there, he felt at home after meeting with the coaches.

“I just liked the environment and the campus,” Capobianco said. “The baseball field is amazing. The facilities were great. The coaching staff, in general, was amazing. I really felt like I got along with them.”

After receiving the offer in the coaches’ offices, Capobianco decided to take some time to discuss the decision with his family and Dallastown coach Greg Kinneman. 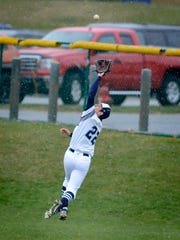 Brotherly love: One person he had to talk to was his older brother, Joe Capobianco. The brothers grew up playing baseball together since Pete was 6. They dreamed of playing college baseball.

“He was pretty pumped for me,” Capobianco said of his older brother, who graduated from Dallastown in 2017. “He’s always been there for me and helped with the process.”

Pete Capobianco said he learned a lot from watching his brother go through the recruiting process and it helped him out. Joe Capobianco recently transferred from Flagler College in Florida to York College to play baseball.

Joe Capobianco makes a leaping throw in a PIAA playoff game for Dallastown High School. He plans to play for York College next season. (Photo: The York Dispatch)

Once he finally made his decision to commit to Gardner-Webb, Pete Capobianco was relieved. After traveling to multiple states and playing in front of hundreds of coaches, he was happy to finish his recruiting journey.

“It just felt really great to finally get it over with,” Capobianco said. “It really is a stressful process. Playing so much baseball in front of so many scouts. You never know when you’re going to have a bad game in front of who and who’s watching.”

Although he was excited that he committed to play at a D-I school, Pete Capobianco tried to make sure he didn’t prioritize a higher-level school over the right choice for him. He visited and seriously considered D-II Shippensburg before he decided on Gardner-Webb.

“I tried to not let myself get caught up in the whole, Division I, Division II (and) Division III and just try to find the best fit that I could for me,” Capobianco said. “It just happened to be a Division I school I committed to.”

Living the dream: Three years after his high school career began by reaching a state final on the same team as his older brother, Pete Capobianco said it was crazy to think that they will both be playing college baseball.

As his senior year approaches, Pete Capobianco couldn’t believe how far he came in a short time, but was even more excited about what the future holds.

“Freshman year, I (had) never even heard of Gardner-Webb,” Capobianco said. “You never even think you would commit to a Division I college (after) your junior year. It’s pretty crazy to think about it like that.”