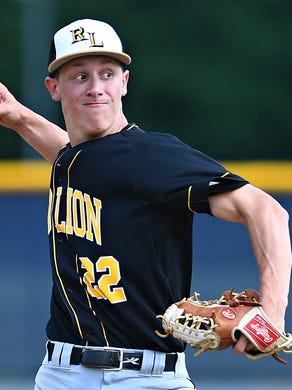 LANCASTER — Years from now, Red Lion High School baseball coach Kevin Lawrence wants his team to remember the positives of their run to the PIAA Class 6-A quarterfinals.

Chief among those are the experiences the players had along the way, while enjoying the game they love with their friends.

One can easily forgive the Lions, however, if getting to that positive reflection takes a little time.

A tough first inning against a talent-laden and senior-rich La Salle College High School team ultimately led to a 13-0 mercy-rule loss to the Explorers after 4 1/2 innings at Manheim Township High School.

Lawrence listed several achievements that his team can boast about — once the sting of Thursday's defeat subsides.

The Lions ended the season at 16-8. By Lawrence’s estimation, it’s the most, or at least tied for most, wins in a single season in school history. He added that he believes his senior class finished as the most successful in a three-year span in school history.

Red Lion also won two District 3 playoff games for the first time and made their first appearance in a district title game, before earning a runner-up finish. The 2018 Lions were also the first in Red Lion lore to not only reach the PIAA tournament, but win a game in the opening round.

Rough start for Lions: Red Lion starting pitcher C.J. Czerwinski looked like he might get through the bottom of the first inning unscathed, recording the first two outs before the Explorers exploded.

La Salle fields a roster that includes 18 seniors, seven of which are NCAA Division I recruits, and that experience and talent quickly came to the forefront during the at-bat first baseman Brian Schaub.

Schaub battled to a full count vs. Czwerinski before roping a liner down the third-base line that was just high enough to clear the fence and just fair enough to avoid the foul pole, giving District 12 champion La Salle (23-3) a quick 2-0 lead.

That touched off a stretch that saw the next seven batters reach base. They would all come around to score. The Explorers hung nine runs in the first frame. Czerwinski was lifted after 38 pitches, credited with giving up seven runs on four hits while striking out one and walking two.

He was replaced by Sean Glatfelter, who finished the inning after being touched for two runs of his own on three hits with one strikeout and one batter hit by pitch.

Explorers impressive: Also included in the Explorers' huge opening inning was Andrew Cossetti’s two-run blast on the first pitch he saw from Glatfelter.

Eric Marasheski also hit a two-run homer in the third inning, increasing La Salle's lead to 11-0. They plated two more in the fourth.

La Salle's Daniel Karrash then come on in relief of starter Gavin Moretski to close it out.

“They’re phenomenal,” Lawrence said of La Salle. “We beat them on three or four pitches and on two or three of those, they hit the ball over the fence. Our job is to make good pitches, their job is to hit the baseball. We did ours and they did theirs.

“There are days where (opponents) do their job and we do ours and we end up on the other end. They’re really good.”

Tyler Stabley started the second inning for Red Lion and went the rest of the way, throwing three innings and allowing four runs (two earned) on eight hits and striking out four.

Moretski tossed four innings for the win, giving up three hits, striking out three and hitting one batter.

In contrast to La Salle’s experienced roster, Red Lion only loses seven seniors from its squad, including standout Kentucky-bound pitcher Tyler Burchett. The hard-throwing 6-foot, 6-inch right-hander was unavailable to pitch Thursday’s game after having pitched in Monday’s first-round game.

New standard at Red Lion: Afterward, Lawrence said he told his players that because of their hard work throughout the year, wearing a Red Lion uniform now comes with a new level of expectations.

“There’s been a new standard set within the program,” Lawrence said he told his team. “And the challenge now for the younger guys is to decide whether or not they want to meet that standard and raise it.”