BASEBALL: Spring Grove walks off with a victory

A walk-off walk allowed Spring Grove to escape with a 3-2 baseball victory over Northeastern on Tuesday.

BASEBALL: Spring Grove walks off with a victory 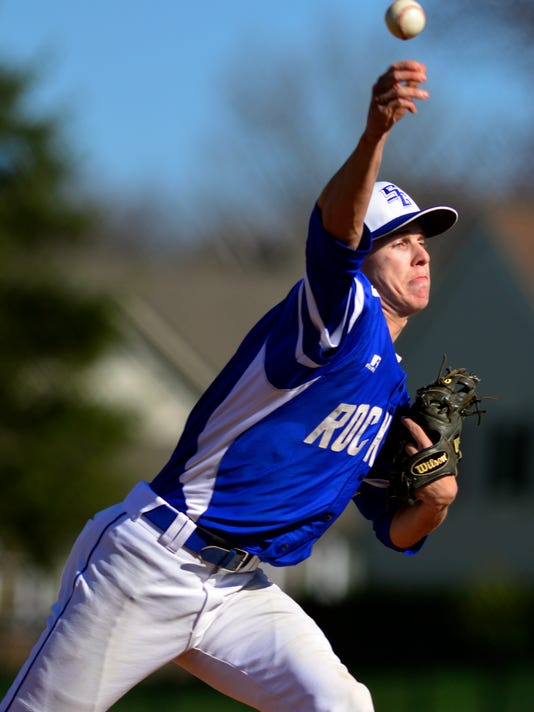 Northeastern shortstop Jordan Zirkle gets the force out on Trent Baker of Spring Grove on a double play attempt, Tuesday, March 29, 2016. John A. Pavoncello photo The York Dispatch
Fullscreen

Jonah Latshaw of Northeastern balances on the edge of the bag after making it to third against Spring Grove, Tuesday, March 29, 2016. John A. Pavoncello photo The York Dispatch
Fullscreen

SPRING GROVE — In an ideal scenario, a pair of division favorites would get the chance to play a few more games before meeting up for a highly anticipated battle during the York-Adams League regular season.

The schedule makers, however, didn't bother to seek input from Spring Grove coach Kevin Stiffler nor Northeastern coach Andy Srebroski for their opinions on the subject.

Thus, the Division I favorite Rockets and Division II favorite Bobcats met Tuesday on a mild, but windy afternoon at Spring Grove High School in late March instead of somewhere closer to the end of the season.

While the timing of the game wasn’t beneficial for either club, the showdown certainly lived up to its billing.

After taking a one-run lead through six innings, the visitors were a mere three outs away from securing a significant early-season triumph. The Rockets, however, are known to be a team that never gives up. And when you give Spring Grove an extra out, Stiffler’s team seemingly always finds a way to take advantage.

A wild pitch on a third strike allowed the Spring Grove leadoff man to reach safely in the bottom of the seventh. A walk and a hit batsman loaded the bases. After Matt Brooks tied the game on a grounder to short, the Rockets won the game when "Buzz" Schuchart drew a walk with the bases loaded.

Spring Grove’s 3-2 triumph set off a celebration on the field for the Papertown boys, while simultaneously leaving the Bobcats in disbelief.

“They’re a good team,” Stiffler said of the Bobcats. “There’s no doubt. I’m not going to say that we’re both going to be playing in the postseason. But this felt like a postseason-type game today.”

If these two were to meet up again in the playoffs, there would be little question that Tuesday’s starting pitchers would be on the mound once more. Northeastern starter Adam Kipp was very effective through six innings, while Brooks was nearly as good for Spring Grove (1-1).

The Rockets, who advanced into the second round of the PIAA Class AAA state playoffs a season ago, showed their experience and poise under pressure. Despite stranding five runners in scoring positions — including the bases loaded in the fifth — the home team mounted a much-needed rally just when it needed it.

It started with No. 9 hitter Cam Sterner, who swung and missed a curve ball in the dirt for strike three. The ball, however, skipped to the backstop, allowing the speedy right fielder to reach safely.

“I know that Cam is the fastest kid on the team,” Brooks said. “At first I was bummed because it was a strikeout and that doesn’t help, but when I saw it bounce all the way to the backstop I knew he was going to get on. After that we kind of all got pumped up.”

That brought up Trent Baker in an obvious bunting situation. Kipp, however, couldn’t find the strike zone and walked him to move the tying run into scoring position. The next pitch hit Caleb Ruth to load the bases for Brooks. While it wasn’t a game-winning hit, Brooks was able to hit a soft grounder to short that scored Sterner to even it up at 2-2.

After an intentional walk to Derek Hoiles loaded the bases again, reliever Tom Dolan came on for Kipp. Dolan struck out Jonathan Sager on three pitches for the second out, but couldn’t retire Schuchart, who walked after battling to a 3-1 count.

Stiffler had praise for his second baseman’s ability to stay relaxed with the game on the line.

“Buzz Schuchart had a great at-bat there,” Stiffler said. “A really good at-bat. He laid off some pitches, fouled one back. We’ll definitely take it. They’re a good team.”

Not surprisingly, the Northeastern dugout was quiet after the game. Srebroski stared into the outfield for a bit before finally telling his guys to make their way toward the bus.

“This is a tough pill to swallow,” he said. “But we have to move on. Have to move forward. Brooks threw a heck of a game, but we had some opportunities (to score more runs) and kind of squandered a few.”

The visitors were able to scratch across a pair of runs despite managing just five hits against Brooks. Center fielder Kody Reeser smoked a RBI single in the third that evened up the score at 1-1. Two innings later it was a single by Devin Blymire, who finished with two hits, that drove in Jonah Latshaw, putting the Bobcats (1-1) ahead 2-1.

Hoiles led a seven-hit Rocket attack with a pair of singles in three at-bats.

Eastern York 6, York Catholic 5: At York Catholic, coming off a 15-strikeout no-hitter last Thursday, Golden Knights’ senior Colby Shimmel wasn’t as sharp on the mound, but still guided his team to the win. Eastern raced out to a 5-2 lead after two innings and held off York Catholic’s late-inning rally to move to 2-0. Wyatt Smith had a triple for the Golden Knights. Bren Taylor had three hits, two RBIs and two runs for the winners, while Bryce Billet added two hits. Dillon Hippensteel had two hits, two RBIs and two runs scored for Catholic. Shimmel struck out three and walked three to get the win, allowing three earned runs in five innings.

York Suburban 19, Hanover 3: At Hanover, the Trojans piled up 20 hits in their road win. Brad Smith and Brendon Delridge each drove in three runs for Suburban, while Collin Slenker, Nicholas Miller, Ryan Day, Brandon Fahs and Carson Holsinger each drove in two. Hanover got two of its three runs driven in by Hunter Martz.

South Western 2, Susquehannock 0: At Hanover,Jey Yeater pitched a three-hit shutout, striking out two and walking four. There were only eight hits in the game.

New Oxford 11, Kennard-Dale 6: At New Oxford, Nate Breighner went 3 for 3 with three runs scored and an RBI to lead the Colonials. Teammate Corban Czap was 2 for 3 with four runs scored. Ben Lowe, Trevor Jacobs, Michael Lizzi and Garrett Lowe each had two hits for the Rams.