West York's Tesia Thomas may never compete in another high school event. Her stellar scholastic legacy, however, will remain unchanged. 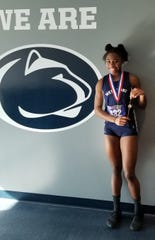 If that turns out to be the case, the three-sport West York standout certainly went out in fitting fashion — as a champion.

On that first Sunday in March, Thomas finished first in the triple jump (40 feet, 1 inch) and second in the long jump (a personal-best 18-10) at the Pennsylvania Track and Field Coaches Association Indoor State Championships.

It also seems appropriate that the event took place at Penn State — the school where Thomas will continue her track-and-field career on the NCAA Division I level. She committed to the Nittany Lions back in January.

On March 1, almost no one would’ve predicted that the indoor state meet would mark the end of one of the greatest athletic careers in York County high school history.

The coronavirus, however, had other ideas. 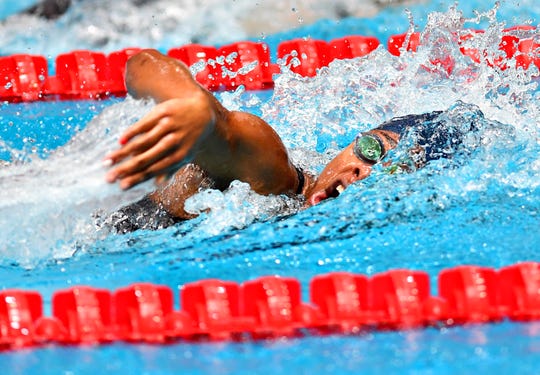 Tesia Thomas, seen here in a file photo, was a standout swimmer for the West York Bulldogs. (Photo: The York Dispatch)

"Surreal" scene at state swimming: Less than two weeks after Thomas’ state championship performance at PSU, she and her West York teammates had just arrived at Bucknell University for the PIAA Class 2-A Swimming and Diving Championships when they got the bad news. The 2-A state swim meet was postponed.

“It was very surreal,” Thomas said of the scene at Bucknell when she learned of the postponement. “We saw some people crying. It was sad to come all that way only to find out we couldn’t compete.”

Shortly thereafter, spring sports were also suspended by the PIAA.

State shutdown: With the state on shutdown to nonessential activities through April, it appears highly unlikely the state 2-A swim meet, or the spring sports season, will be held.

Thomas knows that as well as anyone.

“It would be amazing if they find a way to do it (have the spring sports season), or at least have one big York County meet, but I don’t see it happening,” she said.

Tremendous four-year run: If Thomas’ high school career is over, it will certainly be remembered for decades in these parts.

It’s hard to imagine having a much better four-year run.

In volleyball she was a three-time all-state performer and two-time York-Adams League Division II Player of the Year. She helped the Bulldogs to the 3-A state title in 2018.

Her volleyball coach at West York, Joe Ramp, said simply: “She has been the most athletic young lady I have ever coached.”

She became a force in swimming and diving with only minimal training compared to her competitors. She finished second in diving and fourth in the 50 freestyle at the District 3 2-A Championships in late February.

And, in track and field, she was a consistent state-level performer. As a junior, she took second in the triple jump and fifth in the long jump at the PIAA 3-A Outdoor Championships after winning both of those events at the district meet. She then excelled at the indoor meet on March 1, claiming her first state crown.

"She’s a great kid and I am so glad she had the opportunity to compete in the indoor state meet," West York track-and-field coach Julia Haynes said. "At least she was able to get her well-deserved state championship. I’m so sad about the uncertainty of the outdoor season because she was really the best jumper coming back and had a real chance to be a double state champ."

Volleyball, however, was her favorite high school sport. She especially enjoyed the team aspect of volleyball, saying her teammates helped make it a “great experience.”

She realizes, however, that at 5 feet, 6 inches tall, her college volleyball prospects were limited, despite her prodigious jumping ability.

At Penn State, Thomas will follow in the footsteps of her father, former York High standout Tisen Thomas, who played football for the Nittany Lions.

She plans to study architectural engineering in the classroom and focus on the long jump and triple jump on the field.

“It was the best fit for me,” she said of her college decision. “They were true to me. They weren’t trying to impress me. I also liked that the athletes there were being honest with me. … and I like the way they go about (emphasizing) academics.”

“I always thought that the great part of high school sports was about the experience, while in college, it will be about the memories,” she said. “In high school, it was not too hard to find time to do everything, but in college it would be impossible.”

Family bonds a key: Thomas has tried to stay as active as possible during the coronavirus outbreak, thanks to lots of help from her parents and her four siblings — three sisters and a brother.

“I’ve been working out every single day with my family,” she said. “We go outside on bikes, walks and runs and we play volleyball in the backyard.”

One of her sisters, Trinity, is a well-known All-American gymnast for the University of Florida. The Olympic hopeful recently returned to York County from Florida, and Tesia said it’s “really nice” to have her best friend back at home.

In fact, during this difficult time, Tesia says her entire family has been her rock.

“My bonds with my family strengthen me,” she said.

One of the best ever from York County: Those bonds will be stretched a bit when she leaves for Penn State. The West York senior would like nothing better than to share one final championship campaign with her family, and the entire Bulldog community, before heading to Happy Valley.

By her own admission, however, that looks unlikely.

In the end, however, it will matter little. One missing line on her athletic resume can’t take away from what she’s already accomplished.

Quite simply, she’s one of the best athletes that York County has ever produced.