The Central York boys' basketball team took a 69-67 overtime thriller over Northeastern on Wednesday night in a York-Adams Division I showdown. 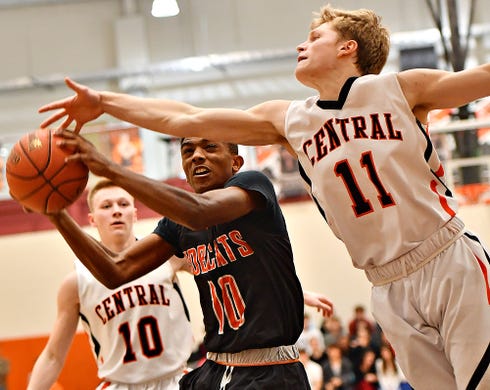 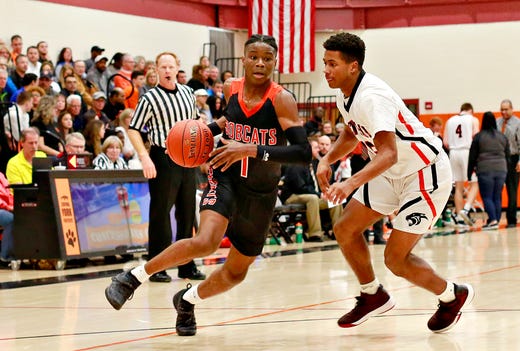 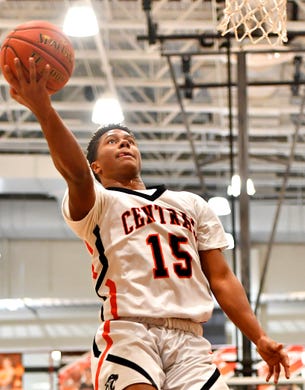 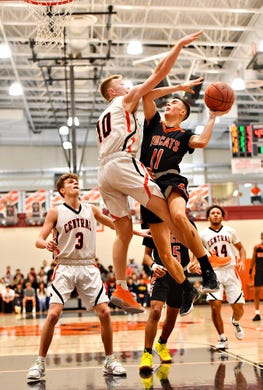 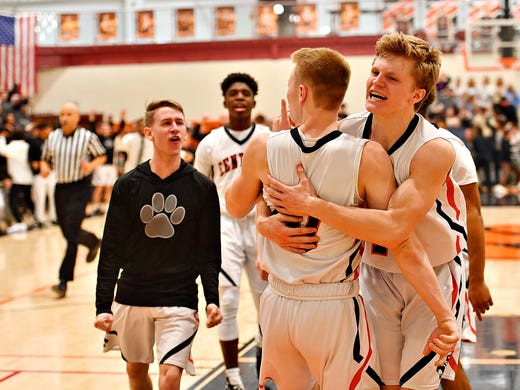 Central York celebrates as they tie up the score at the end of the fourth quarter during boys' basketball action at Central York High School in Springettsbury Township, Wednesday, Jan. 15, 2020. Central York would win the game 69-67 in overtime. Dawn J. Sagert photo The York Dispatch
Fullscreen 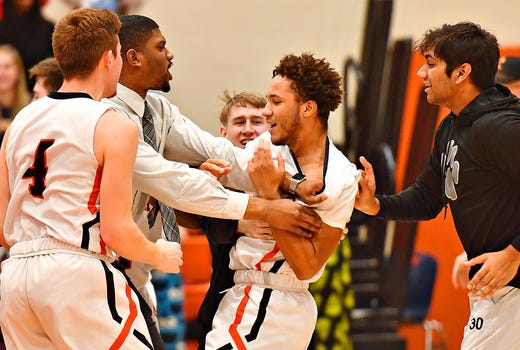 Central York's Kai’ryn Brown, center, is surrounded by his teammates after he hit a couple of huge shots in overtime to help the Panthers to a 69-67 win over Northeastern during boys' basketball action at Central York High School in Springettsbury Township, Wednesday, Jan. 15, 2020. Dawn J. Sagert photo The York Dispatch
Fullscreen 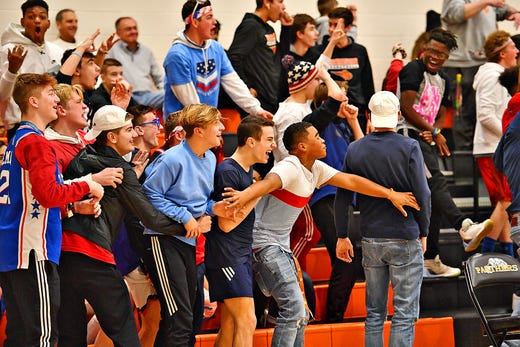 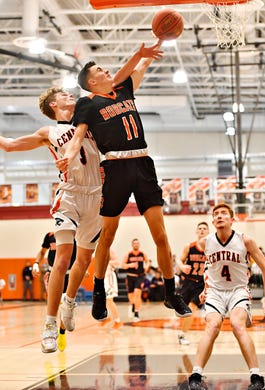 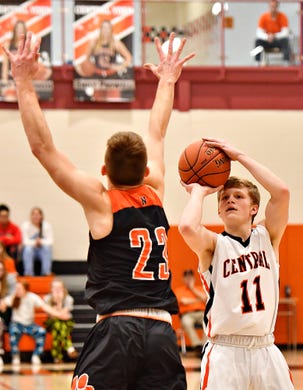 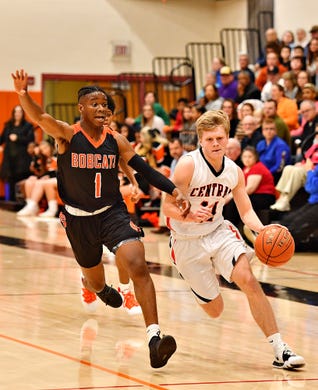 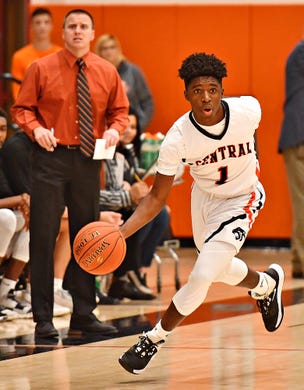 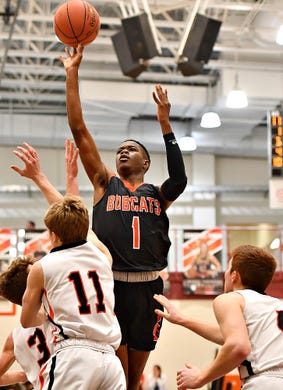 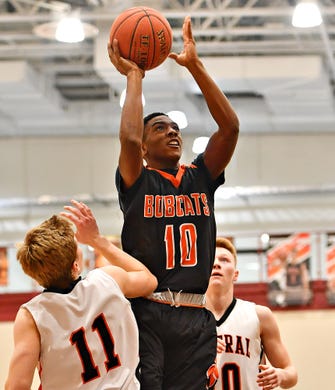 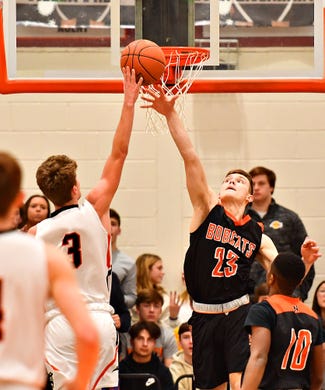 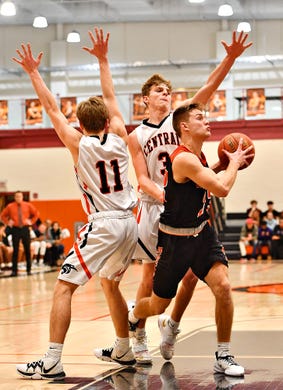 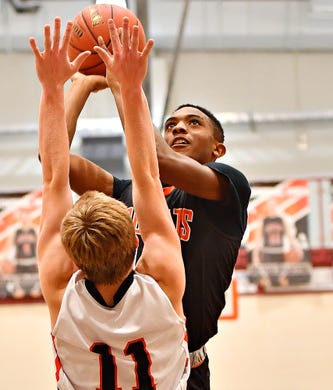 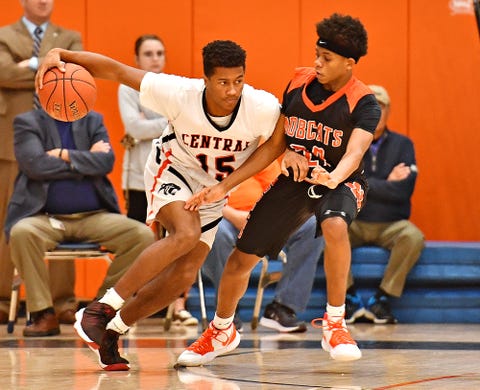 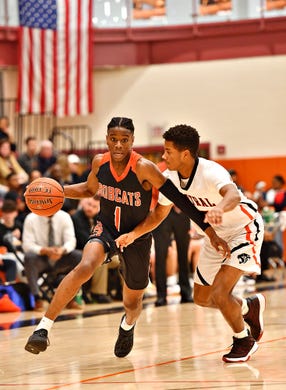 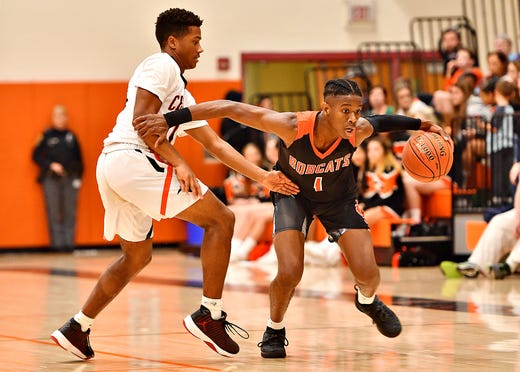 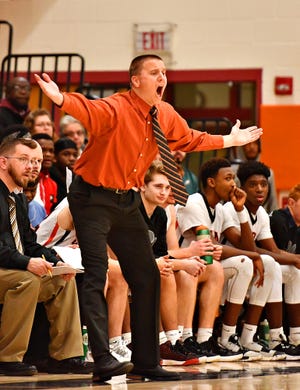 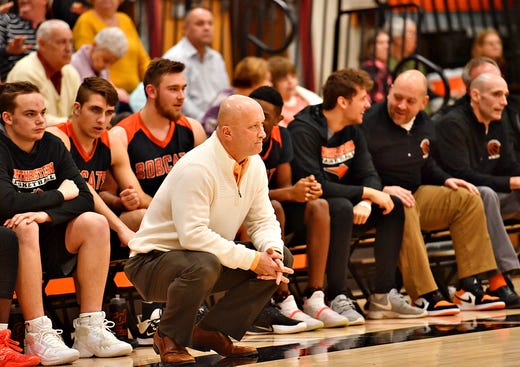 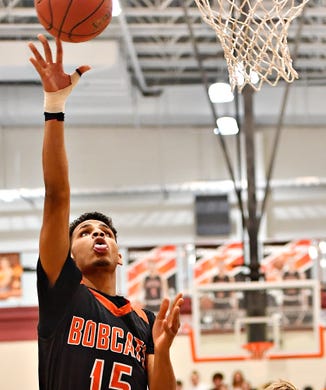 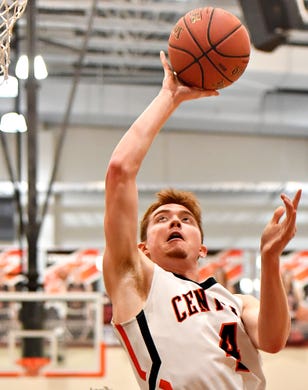 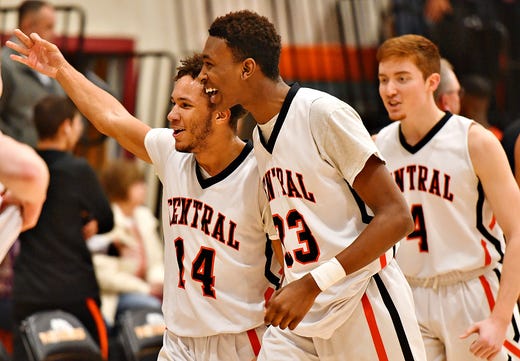 Down by three points with 2.3 seconds left in the game and the ball at the opposite end of the team’s basket, Central York coach Kevin Schieler had to draw up a play to give the Panthers a chance.

The play he chose was something he admitted doesn’t even work in practice, but it did work on this night.

Central York's Kai’ryn Brown, center, is surrounded by his teammates after he hit a couple of huge shots in overtime to help the Panthers to a 69-67 win over Northeastern during boys' basketball action at Central York High School in Springettsbury Township, Wednesday, Jan. 15, 2020. Dawn J. Sagert photo (Photo: The York Dispatch)

Nolan Hubbs launched the ball three quarters of the court to where Beau Pribula leaped with his back to the basket. In one motion, Pribula fired a pass to Evan Eisenhart, who drilled the game-tying 3-pointer, sending the gymnasium into a frenzy and forcing overtime.

“I’m just grateful coach had confidence in me to make the shot,” Eisenhart said. “Work on that every day in practice and it pays off.”

The Panthers weren’t done with their clutch shooting just yet. 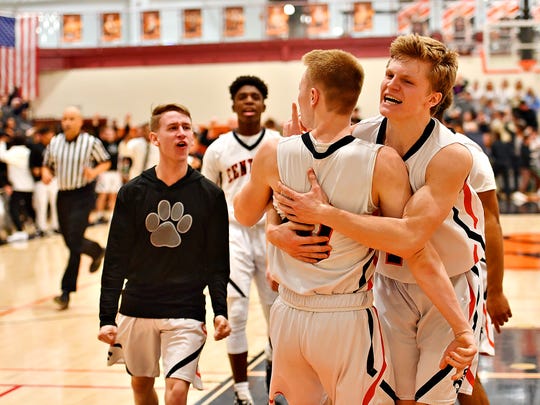 Central York celebrates as they tie up the score at the end of the fourth quarter during boys' basketball action at Central York High School in Springettsbury Township, Wednesday, Jan. 15, 2020. Central York would win the game 69-67 in overtime. Dawn J. Sagert photo (Photo: The York Dispatch)

Brown beats the buzzer: Down by three again with under 30 seconds remaining in overtime, Eisenhart got another chance to tie the game. He missed a 3-pointer, but got the ball back and found Kai’ryn Brown. Without hesitation, Brown, who played sparingly throughout the game, knocked down a corner 3-pointer to tie the contest.

“I know I can shoot so, if the ball gets in my hands I gotta put it up,” Brown said. “I knew I had to get it up as fast as I can and focus on the rim.”

Kairyn Brown hit this 3 and then a layup in the final seconds to give Central a 69-67 win. pic.twitter.com/dZwXUebSp1

On the inbounds attempt, Trey Sweigart stole the Northeastern pass and found Brown, who finished a layup with six seconds left to put Central York up by two.

Northeastern’s Andrew Brodbeck got off a 3-pointer before the buzzer sounded, but it missed and the Panthers secured the crucial York-Adams Division I victory, 69-67.

“That’s just all heart,” Schieler said. “Those things never actually work in practice. We actually practice them and they never work. I’m just glad it worked out tonight.” 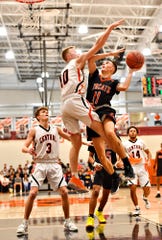 The Panthers-Bobcats contest was one of three overtime contests in the York-Adams League on Wednesday.

A clutch comeback: While the end of the fourth quarter and overtime were controlled by the Panthers (13-2, 7-1), for most of the second half it appeared the Bobcats (11-4, 6-2) would leave with the win.

Northeastern led by 10 points in the final quarter of regulation and seemed to have an answer for every Central York run.

Austin Richards and Brodbeck led the Bobcats with 19 and 18 points, respectively, and each hit five 3-pointers. The perimeter points kept the Panthers at a distance until late in the game, when Eisenhart, Brown and Sweigart forced the game into overtime.

Eisenhart led the Panthers with 16 points and Brown added 12.

Schieler and Eisenhart both credited the Panthers’ depth for the ability to make the comeback. Brown and Pribula were two of the Central York players to make an impact despite sitting for most of the game. 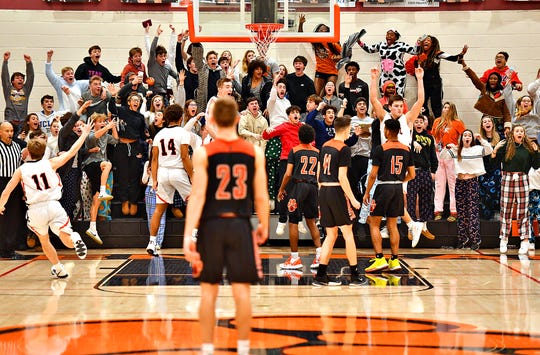 Brown said no matter the role he’s asked to perform, he’s happy to be on the varsity team for the first time and prepares to be ready when it’s his time to make a play.

“I know who I am. I know I can score,” Brown said. “That’s my job to come off the bench and do what they want me to do.”

Big goals: The win kept the Panthers atop the Y-A D-I standings, but Central York has its sights set on winning more than the division title and league tournament this season, and this win showed what the Panthers are capable of doing.

“We’re looking for districts,” Brown said. “We’re trying to do better than just the counties so, this helped us out a lot.”

Susquehannock 79, West York 78 (2-OT): At Glen Rock, in a wild back-and-forth affair, Susquehannock outlasted West York in a Y-A D-II battle. Susquehannock led 18-11 after one quarter, only to see West York dominate the middle two periods, 44-23, to take a 55-41 lead heading into the final eight minutes. Susquehannock used a 23-9 fourth-quarter surge to send the game into OT. In the first OT, each team scored just three points, necessitating a second OT, when Susquehannock used a 12-11 edge to earn the win. Jalen Franklin poured in 34 points to power the Warriors, while Michael Staub added 14 and Jon Lippy scored 12. Jared Shearer's 31-point outburst paced West York, followed by Ty Nalls (18) and Corey Wise (13). Susquehannock improved to 6-7 overall and 2-5 in the division. West York is 7-7 and 5-3.

New Oxford 81, Spring Grove 48: At New Oxford, Connor Jenkins led the Colonials to the Y-A D-I victory by scoring 22 points, including six from behind the arc. Brayden Long scored 19 points, while Abdul Janneh scored 17 points. Janneh went over the 1,000-point mark for his career. For the Rockets, Diarmid Nahshon-Stewart scored 13 points, while David Smith Jr. scored 12 points. New Oxford is now 11-3 overall and 6-2 in the division.

York High 50, Dallastown 49: At York High, the Bearcats trailed 27-21 at the half but outscored the Wildcats 17-8 in the third quarter to take the lead. Antoine Beard led the Bearcats with 17 points, including three from behind the arc. Cameron Gallon hit the game-winning shot for York High. For the Wildcats, Kobe Green scored 19 points. York improved to 10-3 overall and 6-2 in Y-A D-I. Dallastown is 8-6 and 4-5.

Hanover 65, York Tech 46: At Spry, Zyaire Myers led the Nighthawks to the Y-A D-III win by scoring 30 points, including four from behind the arc. Also for Hanover, Andre Caban scored 12 points, while Kyle Garman scored 11 points. For the Spartans, Jhorielki Cabrera scored 13 points. Hanover improved to 7-6 overall and 5-1 in D-III. Tech fell to 5-7 and 3-4.

Littlestown 51, Delone Catholic 39: At McSherrystown, Littlestown rallied from a 24-18 halftime deficit to earn the win. Brayden Staub had 12 points to lead Littlestown. Corbyn Keller had 13 points for Delone. Littlestown is 11-3 overall and leads Y-A D-III at 7-1. Delone is 4-10 and 4-4.

York Suburban 50, Eastern York 47 (OT): At Suburban, the Trojans outscored the Golden Knights 9-6 in OT to earn the dramatic Y-A D-II win. Alyssa Hocker had 12 points to lead the winners, while Kiyanna Dowling and Maddison Perring each had 10. Five of Dowling's points came in the OT, including a 3-for-3 effort at the foul line. Mara Weaver led Eastern with 13 points, while Breana Grim scored 11. Suburban is 10-3 overall and 6-2 in Y-A D-II. Eastern fell to 12-4 and 5-3.

Kennard-Dale 53, Northeastern 31: At Manchester, Lexie Kopko went over the 1,000-point mark for her career in the Rams' win. She finished with 17 points. Jaedyn McKeon led K-D with 18 points. Aleyah Starkes led Northerastern with 13 points. K-D is 11-5 overall and 3-5 in Y-A D-II.

Delone Catholic 66, Littlestown 22: At Littlestown, the Squirettes improved to 15-0 overall and 7-0 in Y-A D-III. Giana Hoddinott (17), Abby Vingsen (13) and Brooke Lawyer (11) each reached double digits in scoring for Delone.

Spring Grove Area 83, New Oxford 36: At Spring Grove, Haley Wagman poured in 30 points and went over the 1,000-point mark for her career for the Rockets. She came into the game needing 24 to reach the milestone. The Rockets improved to 9-3 overall and 5-2 in Y-A D-I. Lexi Hoffman added 14 points for the winners. Morgan Adams pumped in 20 points in a losing cause.

Gettysburg 59, Dover 21: At Dover, Camryn Felix pumped in 13 points to lead Gettysburg, while Skye Sheperd followed with 12. The Warriors improved to 11-2 overall and 6-1 in Y-A D-II.