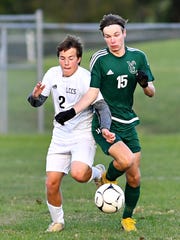 Colin Smith had York Catholic's other goal, while Ben Bullen provided two assists. Philip Jahn made four saves to record the shutout in goal. The winners had a 19-4 edge in shots.

The win advanced the District 3 1-A runner-up Fighting Irish to a quarterfinal contest at 1 p.m. Saturday at Tulpehocken High School against District 11 champion Moravian Academy, which earned a 2-1 victory over District 4 champion Millville in its first-round contest on Tuesday.

Dallastown's stellar boys' season comes to end: The Dallastown Wildcats had no answer for La Salle College High School standout Brandon Curran, who scored all four of his team's goals in a 4-2 triumph in a PIAA Class 4-A first-round boys' soccer battle at Ramp Playground in Philadelphia.

Gabe Wunderlich and Blake Pitzer scored for the Wildcats.

The loss ended Dallastown's standout season at 23-2. The York-Adams League champion Wildcats won their first 23 games this season before losing to Central Dauphin in the District 3 4-A title match on Saturday, 1-0.

Dallastown had been ranked among the top 10 high school teams in the nation according to one poll, as well as the top team in Pennsylvania.

On the season, the Wildcats scored 59 goals, while allowing 14, including 15 clean sheets.

La Salle, the District 12 4-A champ, advances to the state quarterfinals on Saturday.

Strath Haven advances to the state quarterfinals on Saturday.

Fairfield improved to 22-2. The Knights are trying to win a second state championship in four years.