C.J. Czerwinski pitched Red Lion to a 3-0 triumph over rival Dallastown on Wednesday in a key York-Adams Division I baseball game.

VIDEO: Pitcher C.J. Czerwinski discusses his one-hit shutout in Red Lions' 3-0 win over Dallastown. The righty struck out eight and walked one in the victory. York Dispatch

The College of Charleston recruit looked uncomfortable on the windy day and didn’t have control of his breaking ball.

That was only the first batter, though.

For the next 24 batters, Czerwinski was about as flawless as a pitcher can be. The future NCAA Division I hurler led the Lions to a 3-0 victory with a one-hit shutout. The win brings the Lions (3-1, 3-1) into a tie with Dallastown for first place in York-Adams League Division I.

“Dallastown is always a big rival for us,” Czerwinski said. “Beating them is always a great feeling, because they’re our crosstown rival.”

After the leadoff walk, the 5-foot, 11-inch, right-hander allowed only three Wildcats to reach base — all of which came in the first two innings. The three Wildcats reached base on a dropped fly ball, a dropped third strike after a wicked breaking ball went to the backstop and an infield single that was inches away from being an out after an impressive stop by shortstop Cole Daugherty. 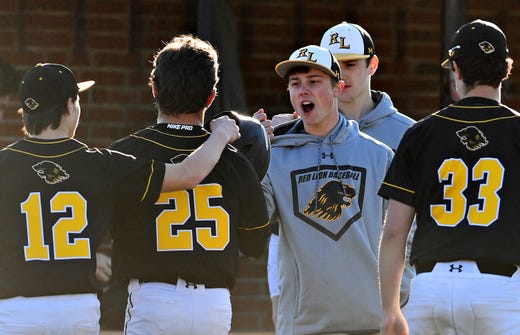 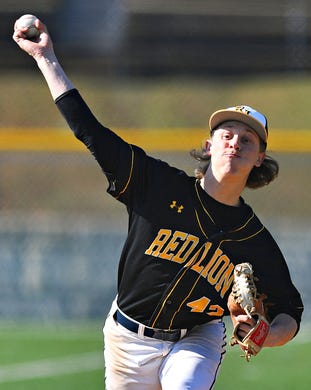 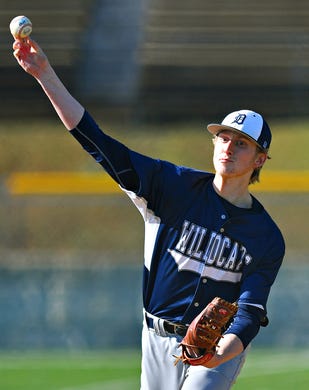 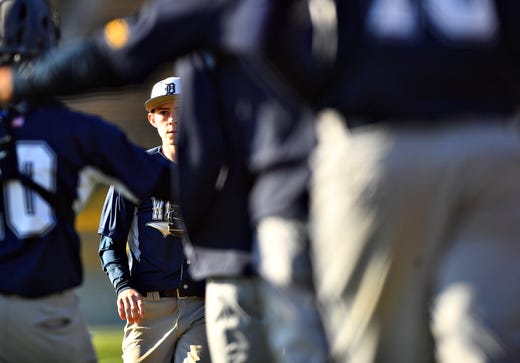 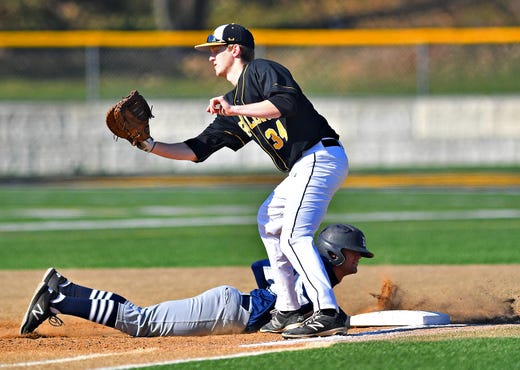 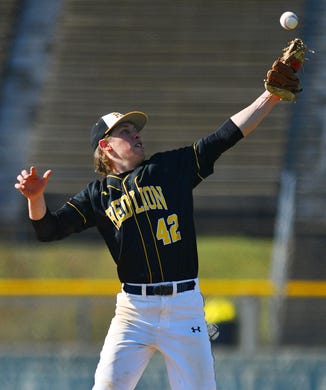 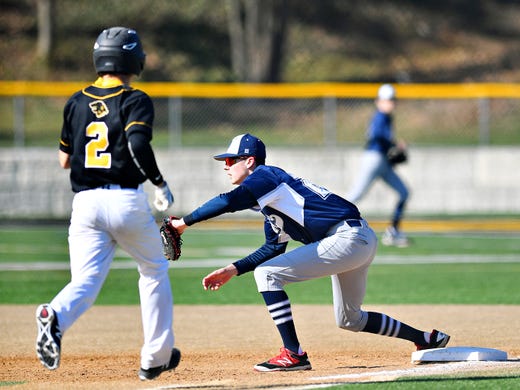 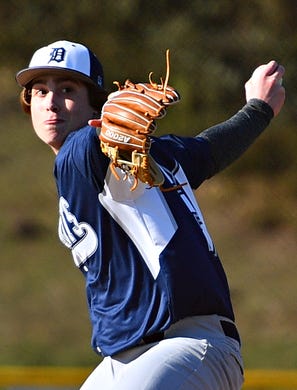 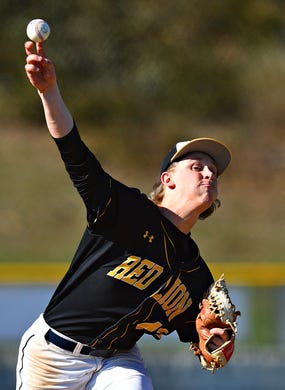 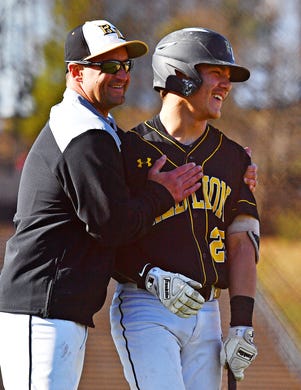 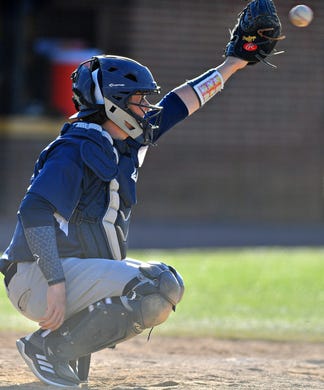 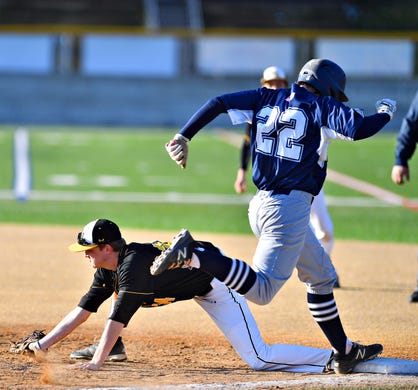 “He makes my job pretty easy; I didn’t do anything,” said Red Lion head coach Kevin Lawrence. “C.J. threw the ball extremely well. He commanded the zone, and he made out pitches. They battled him tough in more than a couple at-bats, and he never gave in.”

After the choppy first seven batters, Czerwinski was perfect, retiring the final 18 batters in order. Staying under the mandated 100-pitch count, the senior allowed only the infield hit and the one walk while striking out eight.

Czerwinski’s off-speed pitches: Czerwinski sported a solid fastball with movement, but it was his breaking balls that kept the Wildcats off balance.

“He can throw any of his pitches in any count,” Lawrence said.

Early in the season, pitchers often struggle with their off-speed pitches. Cold weather and a lack of repetitions can cause curve balls, sliders and change-ups to lack movement or accuracy in March and early April.

“I throw a lot of bullpens in January, February and March,” Czerwinski said. “I get the kinks out of my curve ball and slider in my bullpens.”

Getting stronger: Czerwinski said he usually gets stronger as the game progresses, and Wednesday was evidence of that.

“Usually I get into a zone in the third or fourth inning, and my breaking ball gets better and I can throw it anywhere I want and whenever I want,” he said.

Lawrence said Czerwinski’s success late in games can be attributed to his work in the offseason.

“He continues to take the weight room extraordinarily seriously,” Lawrence said. “When you see him out here having success, that’s been earned through a real commitment to things that nobody sees except for a few of us.” 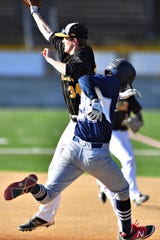 “That’s when we lost the baseball game,” Kinneman said.

In the first inning, Czerwinski knocked down a hard-hit come-backer to prevent a run. In the second, he struck out three straight after the first two reached on a dropped third strike and an infield single. Four of Czerwinski’s eight strikeouts came in the second inning.

“If you’re facing a quality arm, you definitely have to take advantage of all the opportunities you get,” Kinneman said. “In the first two innings we should’ve scored two runs.”

Red Lion’s offense: In contrast, the Lions did come up with two-out hits with runners in scoring position.

Czerwinski singled to left-center field to score Channing Bratton, who led off the game with a walk, in the first inning.

“Instead of being a dead-pull hitter, he’s starting to use the entire field,” Lawrence said.

The Lions’ second run came on an error on a safety squeeze that scored Nate Hodgkinson. In the fifth inning, Hodgkinson singled home Cole Daugherty, who reached on an error, to put the Lions up 3-0.

Weakland update: Local baseball fans may have expected Dallastown ace Alex Weakland to pitch for the Wildcats. However, Kinneman said the Indiana University of Pennsylvania recruit is dealing with inflammation in his pitching arm and is working his way back to full strength.

“We’re dealing with the big picture,” Kinneman said. “We want Alex Weakland in games 18, 19, 20 and beyond. We aren’t worried about games one through five.”

Struggles vs. Red Lion: The loss for Dallastown is the Wildcats’ fourth straight to Red Lion. With one more match-up between the Y-A powers this regular season, Kinneman said the recent struggles aren't a factor.

“We don’t circle Red Lion on our calendar,” Kinneman said. “We have 20 baseball games, and they’re two of the 20.” 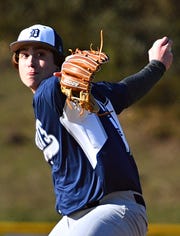 Wolf excels in relief: After Dallastown starter Darren Sciortino was bounced after 1 2/3 innings, Carson Wolf threw well in relief. The junior allowed two hits and one unearned run in 4 1/3 innings.

“He’s thrown two great games,” Kinneman said. “He beat Governor Mifflin last Friday night, 4-1. He did everything we asked him to do today. He gave us a chance.”

Trust in CJ: Bratton, Red Lion’s catcher, said the Lions are confident when their ace is on the bump.

“We have full trust in C.J.,” Bratton said. “We know how he can pitch. We feel nice and easy at the plate. We don’t have as much stress on us.”

York Catholic 9, Fairfield 8 (9 innings): At York, the Irish scored three runs in the bottom of the ninth, with the winning blow a double by Anthony Catterall, who finished with three hits, including two doubles, and five RBIs. Nick Demarco added three hits and a run scored for the Irish, while Bryan Bullen and Ben Bullen each had two hits and a run scored.

South Western 8, Central York 4: At Central, Dawson Salisbury had three hits, including a double, with an RBI and three runs scored to lead the Mustangs. South Western's Ethan Stalnecker walked four times. Zach Reed pitched a complete game to get the win, allowing two earned runs while striking out nine. Central's Cannon Maye doubled with an RBI and run scored.

Gettysburg 6, Dover 3: At Gettysburg, Dillon Gebler had two doubles with two RBIs and a run scored to lead the Warriors. Marshall Mott got the win, going 5 1/3 innings and allowing two runs. Owen Kennell had two hits for Dover, while Konner Gibboney homered.

Kennard-Dale 11, Littlestown 0 (5 innings): At Fawn Grove, Garrett Lowe led the Rams by throwing a five-inning, one-hitter, striking out nine and walking five. He also connecting at the plate by homering with two RBIs, two runs scored and and two walks. Also for K-D, Jason Williams went 3 for 3 with two RBIs and one run scored, while Ryan Schubert homered.

Littlestown 12, Kennard-Dale 6: At Fawn Grove, Katie Frock led the Thunderbolts by connecting for a homer and going 3 for 4 with four RBIs and three runs scored. Teammate Bailey Smith had two doubles, three RBIs and one run scored. For the Rams, Jaeydn McKeon went 3 for 3, including a homer and a triple, with two RBIs and two runs scored; Lexie Kopko went 2 for 4 with a double and two runs scored; and Marguerite DeFranco doubled.