The Central York boys' basketball team earned a little payback vs. Northeastern on Wednesday night. The Panthers earned 72-61 win over the Bobcats. 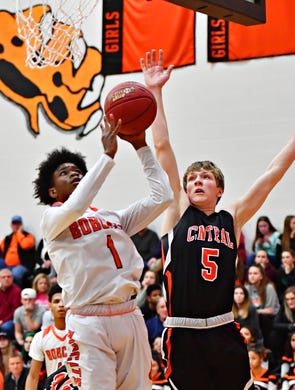 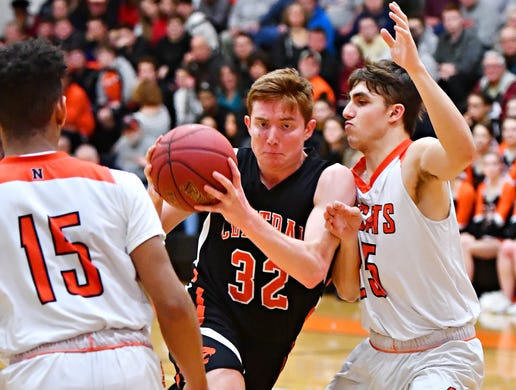 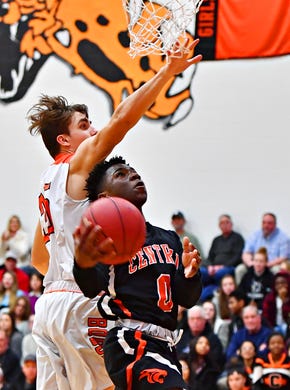 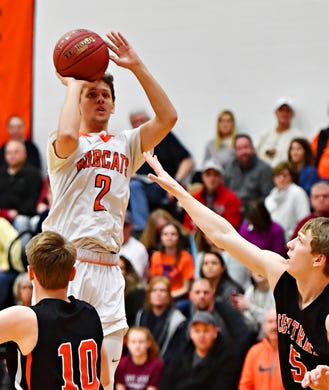 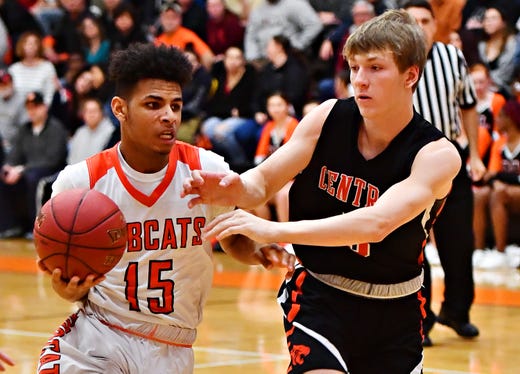 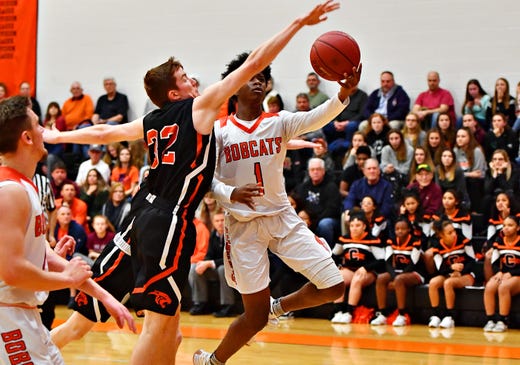 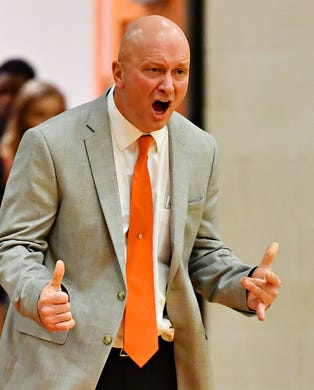 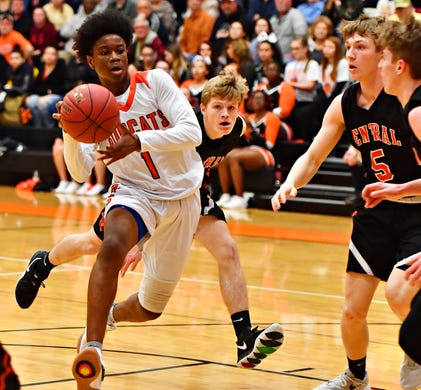 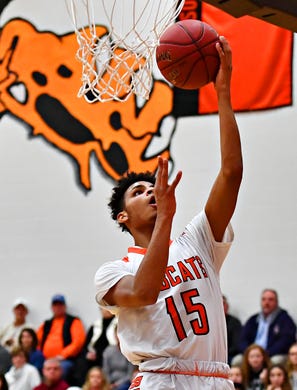 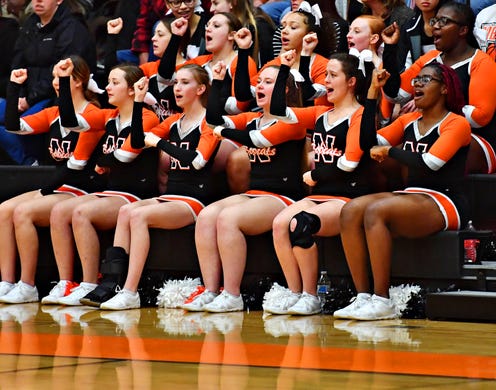 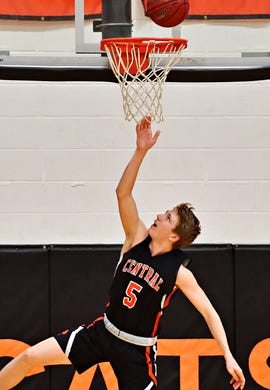 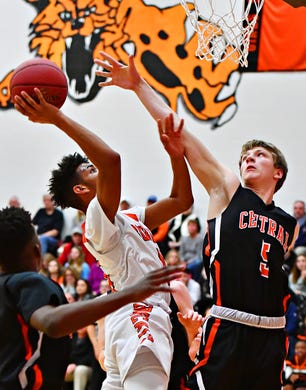 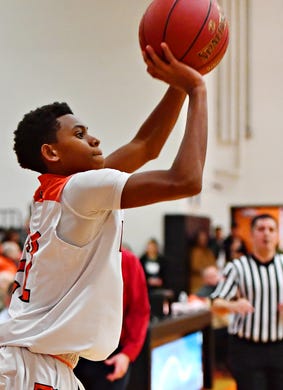 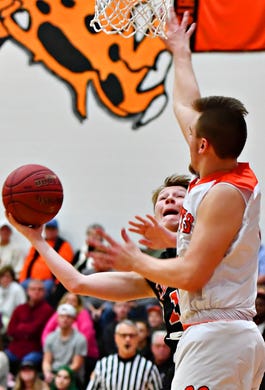 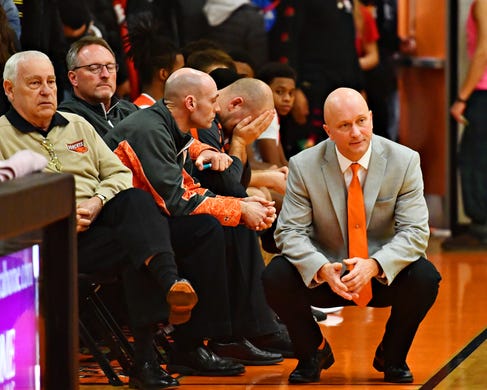 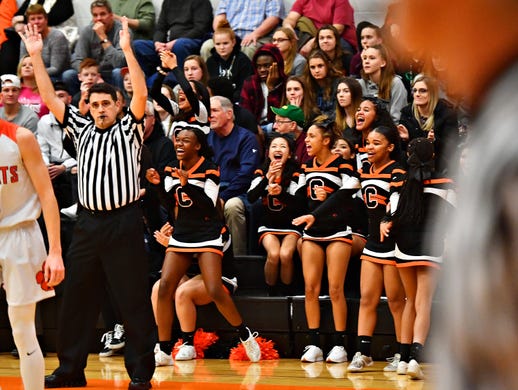 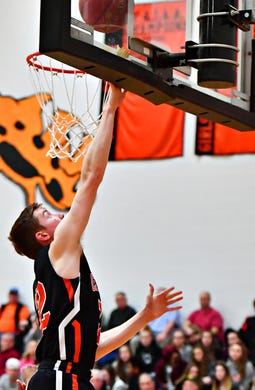 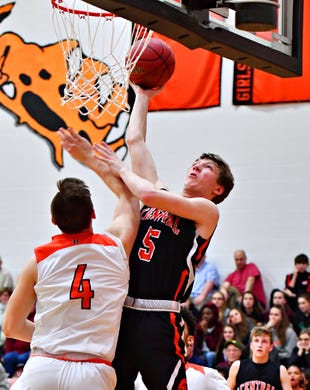 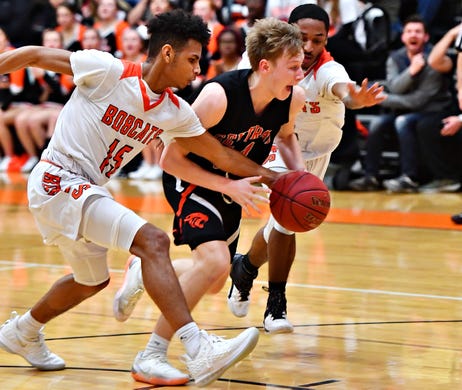 MANCHESTER — It was just more than a month ago that the Central York boys’ basketball team was riding high into a showdown with rival Northeastern.

Coming off a big win against Abraham Lincoln at the Elizabethtown Tip-Off Tournament and another impressive triumph over York-Adams Division I foe Red Lion, the Panthers were rolling. The Bobcats, however, cooled off the Panthers with a two-point victory on Central’s home court.

That loss back on Dec. 14 was something that the CY boys have not forgotten.

Wednesday evening the Panthers had a chance to earn some payback when they visited their rivals in Manchester.

Using a blend of balanced scoring with a mix of clutch shots, the Central boys were able to overcome a terrific shooting night by Northeastern standout Nate Wilson (23 points, seven 3-pointers) to claim an impressive 72-61 triumph.

“We did an excellent job with our balance tonight,” Central coach Kevin Schieler said. “And it was at different times throughout the game.”

Evan Eisenhart, who was one of four CY players in double figures with 15 points, had a big three-point play that gave his side some separation in the third quarter. Alex Salter hit three big 3-pointers as well as a pair of free throws late en route to 11 points. Gabe Guidinger finished with 12 points while giving his team a handful of rebounds.

Richard comes up big: Perhaps the biggest contributor was forward Braden Richard, who finished off several plays in the lane offensively, including a big 3-point play with just more than a minute left that extended Central’s lead to seven points, en route to a team-high 17 points.

“This year we are clearly a more balanced team than we have ever been since I’ve been in high school,” Richard said. “We don’t have a star, but I think that’s even better for us because we all love each other and we all trust each other with the ball.”

“Braden obviously had a big night overall,” Schieler said. “But what I really liked was in the fourth quarter that all of those points (17) just didn’t come by themselves. It came from guys attacking and making extra passes and things like that.”

Wilson's performance no surprise to Richard: Richard is no stranger to playing in an intense and raucous environment inside of the gym at Northeastern. As a standout on the highly acclaimed CY boys’ volleyball team, there’s no bigger rivalry in all of District 3 in that sport than the one between the Panthers and the Bobcats.

Seeing Wilson, an all-state caliber player in volleyball, make his first seven shots on the night was not anything that surprised the CY standout.

“He’s an amazing shooter,” Richard said. “He always has been ever since we were younger. It’s always great to play against him. He puts up points and we put up points and I was just happy that it went our way tonight.” 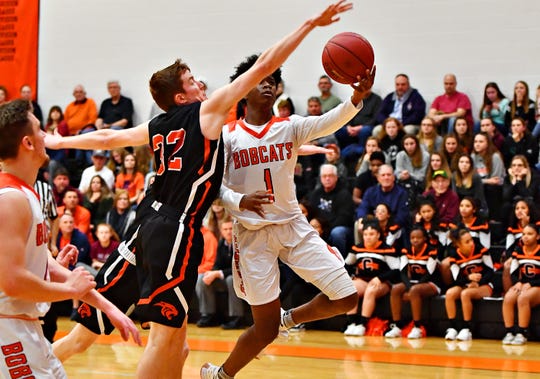 Playoff implications: The victory was not only big for bragging rights, but also for postseason play as well. The top three teams in D-I will make the Y-A draw, so a loss would have given the Bobcats the tiebreaker if the two sides would finish tied in the standings.

“This is all about jockeying for position to get into the postseason right now,” Schieler said. “And that’s why (tonight’s win) was big.”

Dallastown 62, York High 56: The Wildcats came back from an 11-point deficit following the first quarter to defeat visiting York High, the No. 5 team in Class 5-A according to two state polls. Kobe Green led the Wildcats with 18 points, while Kyle Richardson went 9 of 12 from the line in his 13-point performance. Marquise McClean led the Bearcats with 22 points, making 12 of 17 free throws. Clovis Gallon Jr. chipped in with 14 points. Dallastown improved to 8-6 overall and 5-4 in D-I. York High is now 12-2 and 7-2.

New Oxford 52, Spring Grove 39: The Colonials moved into a sole possession of first place in D-I, thanks to York High’s loss at Dallastown. Abdul Janneh led New Oxford with 13 points. Connor Jenkins made two 3-pointers to chip in with 11 points. New Oxford is now 12-3 overall and 8-1 in D-I play. Spring Grove falls to 1-13 and 1-8 with the loss.

York Tech 69, Hanover 42: Tech’s Terence Romey scored 32 points to lead the Spartans. He had four 3-pointers and made 6 of 7 free throw attempts. Zadin Zorbauch and Jahkwan Batty also scored in double digits with 17 and 10 points, respectively. Tech improved to 10-4 overall and 7-2 in Y-A D-III play. Hanover fell to 2-15 and 1-8.

Dover 59, Gettysburg 40: At Dover, Keith Davis and Elijah Sutton both scored 23 points, outscoring the Warriors together. Davis made three 3-pointers and all four of his free throws. Sutton knocked down one from behind the arc and four of his five from the stripe. Victor Dorm chipped in with 10 points. Dover is now 9-7 overall and 5-3 in Y-A D-II. Gettysburg fell to 8-8 and 4-4.

Bermudian Springs 45, York Catholic 30: The Eagles held the Irish to fewer than 10 points in each of the first three quarters. Bermudian’s Connor Shaw led the Eagles with 15 points. He made two 3-pointers and 7 of his 8 free throws. Tyler Reinert also made two 3s and chipped in with 12 points. Dylan Durbin led York Catholic with 11 points. Bermudian improved to 5-10 overall and 4-5 in D-III action. The Irish are now 3-13 and 3-6.

West York 53, Susquehannock 45: After trailing by seven points at halftime, West York allowed only 11 points in the second half to upset the host Warriors. Susquehannock was held to three points in the third quarter and eight in the fourth, while the Bulldogs scored 26 total in the final two periods. Makennah Hoffman, Alayna Harris, Alyssa Zorbaugh and Dorian Ilyes all scored in double figures for the Bulldogs with 12, 12, 11 and 10, respectively. Susquehannock’s Jayla Galbreath and Jaden Walker combined for 25 points. West York improved to 6-9 overall and 4-5 in D-II. The Warriors are now 11-4 and 7-2.

York Catholic 58, Bermudian Springs 37: The Fighting Irish jumped out to a 13-1 lead after the first quarter and never looked back. Sam Bulik led York Catholic with 17 points, while Gina Citrone and Gabby Coley chipped in with 11 and 10 points, respectively. Emily Shearer led the Eagles with 10 points. The Irish improved to 12-4 overall and 7-1 in Y-A D-III, while the Eagles fell to 9-4 and 4-3.

Susquenita 57, Kennard-Dale 24: At Fawn Grove, Aiden Stewart (132) led the Rams by securing their lone pin in the first bout of the evening in a nonleague contest. As a team, K-D led 18-0 after the first three bouts, but couldn't maintain the momentum.