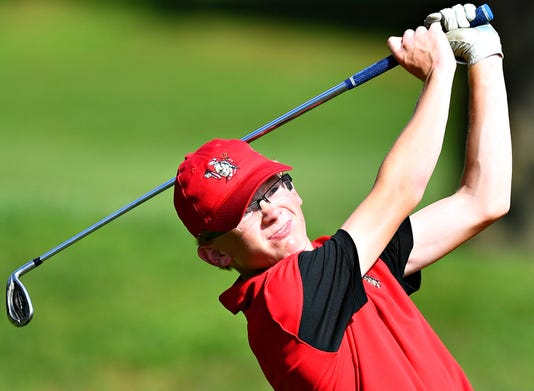 Susquehannock's Andrew Roberts, seen here in a file photo, had the low individual round of the day, a 36, at Regents' Glen Country Club on Monday in a York-Adams Division II golf match. DISPATCH FILE PHOTO(Photo: The York Dispatch)Buy Photo

The event was reduced to nine holes because of wet conditions.

Roberts shot a 36 to help the Warriors to a 172 total and a first-place finish.

There is just one D-II match left on Thursday at Honey Run Golf Course. If Susquehannock can avoid finishing last or second to last in that event, it will capture the division crown.

Suburban, West York, Dover and Kennard-Dale each tied for second place with a 178 total, bringing the tiebreakers into play, which are based on the score of the fifth or sixth golfer for each team. The Trojans took second, followed by the Bulldogs, Eagles and Rams.

There was also tie for sixth at 207. Eastern York won that tiebreaker over Gettysburg.

Devin Peart of Littlestown, playing as an independent, shot a 38 for second place individually. The only other golfer to break 40 was Kennard-Dale's Nick Fowler at 39.

Central York sews up Division I title: The unbeaten Central York Panthers clinched the York-Adams Division I golf title with a first-place finish Monday at the Bridges Golf Club.

The event was shortened to nine holes because of rain.

The final D-III match of the season is Wednesday at Bridgewater. The Irish, by finishing first or second in that match, will clinch the division crown.

Central York 2, Dallastown 1: In a battle of York-Adams Division I unbeatens, the Panthers emerged with the pivotal victory. Both teams entered the contest 4-0 in the division. The Panthers are now alone in first. Central is now 6-2 overall, while Dallastown is 5-3. Kyra Heap scored at the 4:05 mark of the second half to break a 1-1 tie. Lily Cantabene had Dallastown's goal. Grace Harrold scored for Dallastown. Central won the JV match, 1-0.

York Suburban 2, Dover 1: At Suburban, Carly Bowen scored the game-winning goal for the Trojans when she found the back of the net with 1 minute, 33 seconds remaining, breaking a 1-1 tie. Emily Myers scored Suburban's other goal, while Caitlyn Mackin added an assist. For the Eagles, Mackensie Husson scored a lone goal. Dover won the JV match, 2-0.

York Suburban 5, Kennard-Dale 2: At Suburban, Tomasz Ziminski led the Trojans to the home victory by scoring two goals and adding one assist. For the Rams, Kevin Avalos scored both goals. Suburban won the JV match, 5-0.