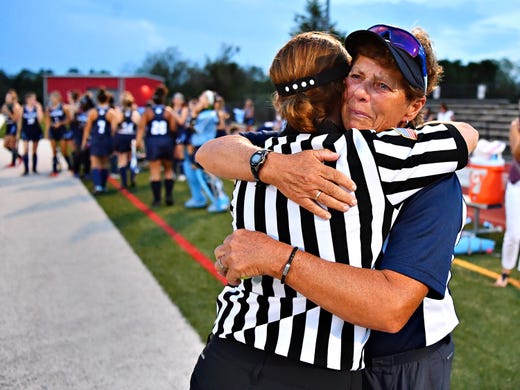 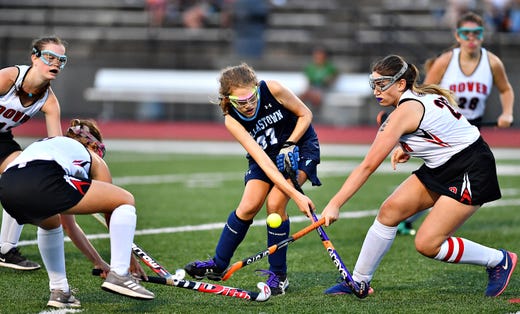 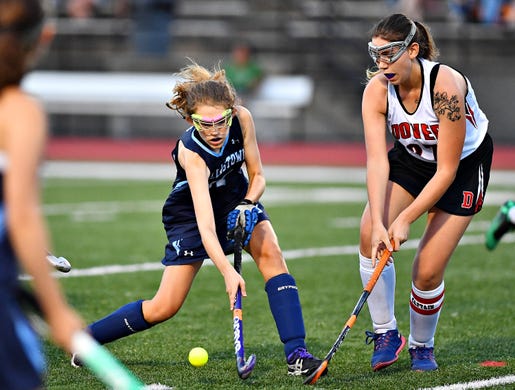 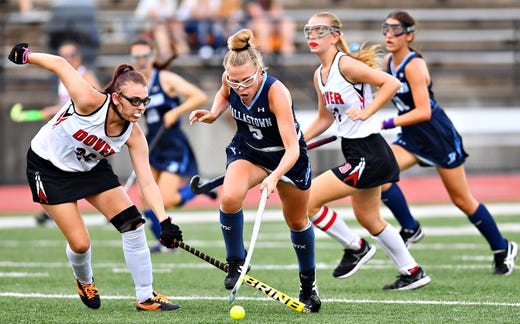 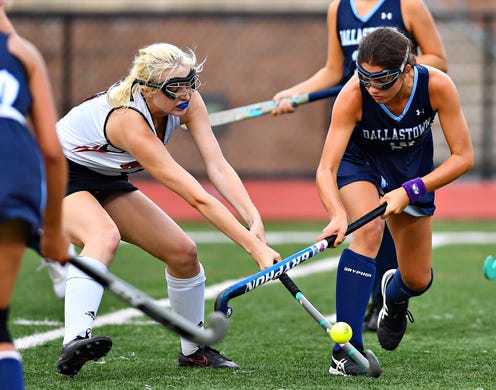 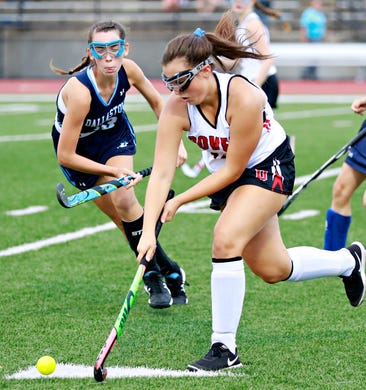 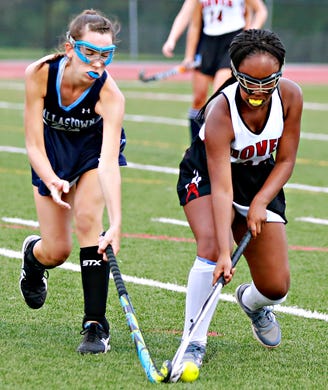 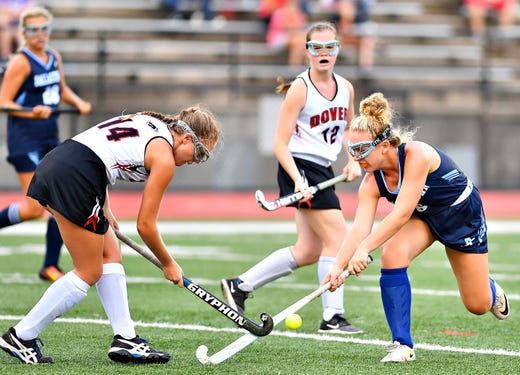 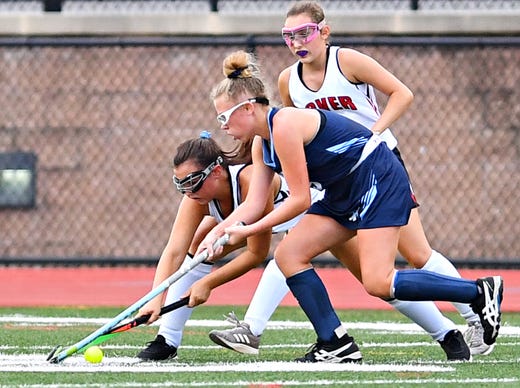 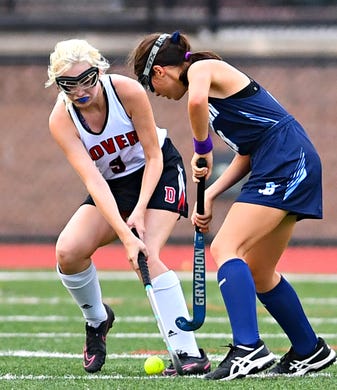 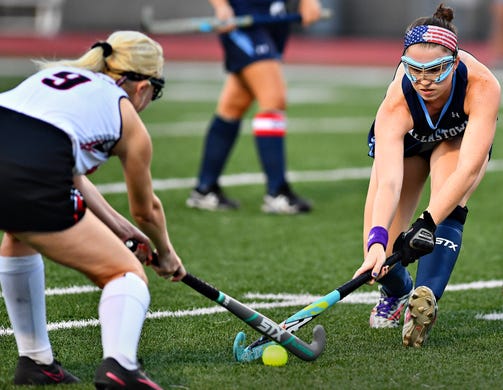 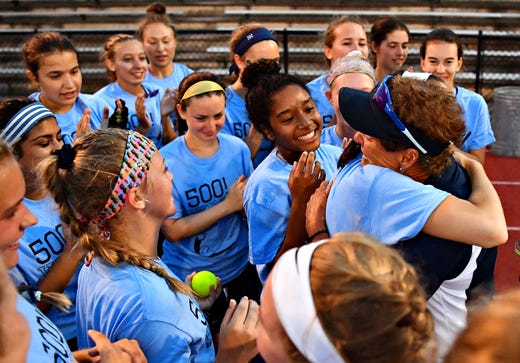 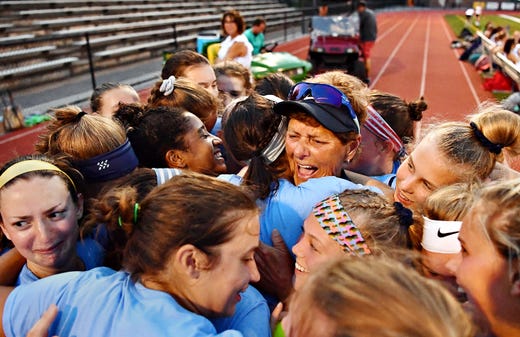 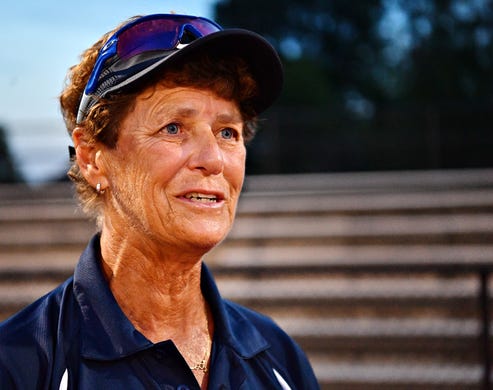 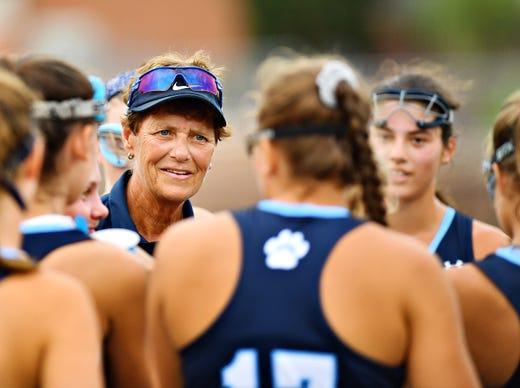 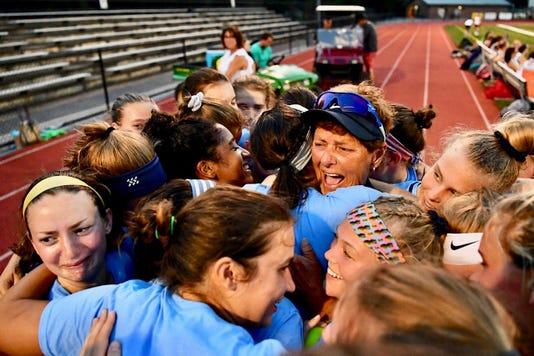 DOVER — While Jeri Myers mostly tried to push aside the historic mark that she was chasing, the Dallastown field hockey coach finally allowed her emotions to catch up to her.

Tears of joy and gratitude dripped down Myers’ face Thursday evening moments after her Wildcats cruised to a 6-0 triumph over Dover to cement her 500th career victory as the field hockey team’s head coach.

Several of Myers’ former players, who also happen to be mothers of children who also played for the longtime Dallastown coach, ran over to their former coach to give her big hugs afterwards.

That was something that caught Myers off-guard.

“It’s very nice that they came,” Myers said while battling the tears. “I didn’t know if anyone was going to show up, so it’s really nice.”

Seconds after the final horn sounded, the entire Dallastown team surrounded their coach in celebration. While she is fond of saying that she coaches for her players, it was clear Thursday that her players play for her. They all ran to put on powder blue shirts that commemorated their coaches’ 500th victory. 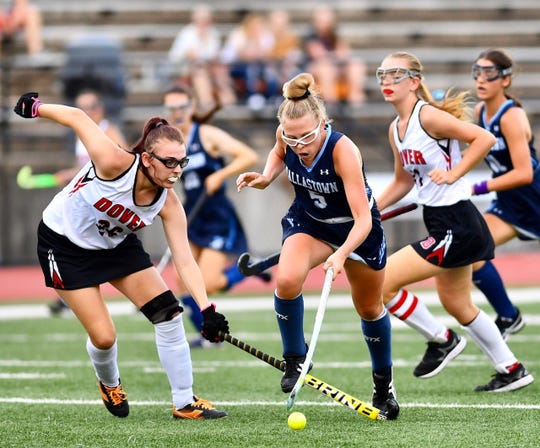 “It’s just amazing to see how far she’s come,” senior Lani Powell said. “Not every (coach) can say they got to 500 wins so I know this is a big honor.”

While Myers has been honored to coach the field hockey team since the fall of 1981, her success has been the result of three things, in her opinion.

“It’s about dedication, commitment and sacrifice,” Myers said. “We say that school is first, hockey is second and everything else is third.”

Myers has certainly had a big hand in helping the players that she coaches grow and improve under her tenure. She’s also been fortunate enough to have a handful of really talented and exceptional players during her 38-year run.

Some of the highlights of Myers' career include her first-ever victory (a triumph over West York in strokes during a 3-10 campaign that would be her only losing season of her career), getting to the state semifinals in 1998 and a third-place contest in the District 3 playoffs back in 1992.

While the latter would seem a bit unusual, the circumstances surrounding that contest quickly brought a smile to Myers’ face.

“We were playing Garden Spot and their coach kept telling me who fourth place was going to be playing in states,” Myers said. “And we beat them in strokes and I just said to him, ‘it’s good that you scouted them because that’s who you’re playing.’”

Now in her final year at Dallastown, Myers is hoping to add one or two more memories in what she hopes will be a playoff season before she steps away for good.

“I want to make the (York-Adams League) tournament,” she said. “Last year we missed the tournament and I hope we make it to districts too.”

As for the contest, the Wildcats (2-0) took a 2-0 lead midway through the first half on goals by Audrey Peri and Camryn Eveler. Those two also scored in the second half sandwiched around tallies from Zoe Heath and Caroline Dallmeyer.

West York 2, Fairfield 1: At West York, Madge Myers broke a 1-1 tie, in the second half when she found the back of the net with 7:32 left to play to clinch the victory for the Bulldogs. Nikki Jumba scored a first-half goal for Wet York, while Maggie Spadafora added one assist. No JV match was played.

South Western 4, Spring Grove 0: At Hanover, Caitlyn Coates led the Mustangs to the home victory by recording a hat trick. Teammate Kat Study scored one goal and added one assist.

Kennard-Dale 4, Delone Catholic 1: Jenna Soukaseum had two goals and Jenna Crosby and Chloe Fornoff had one each  in K-D's victory. Lexi Barlow excelled a sweeper for KD.

Gettysburg 3, Susquehannock 1: At Glen Rock, Ashlynn Weger had Susquehannock's lone goal in the loss. Jordyn Prediger had five saves in goal for Susquehannock. The game was shortened because of rain.

Littestown 7, York Catholic 1: At York, Sydney Mentzer picked up the only score for the Irish.Lily Proskine made five saves for the Irish.

Dallastown 4, South Western 2: At Hanover, the Wildcats triumphed behind a pair of goals from Jordan Leese.

Dallastown 2, South Western 1: At Dallastown, Gabe Wunderlich's first-half goal at the 13:29 mark broke a 1-1 tie and ended up being the game-winning and clinching goal for the Wildcats. Mike Shirey scored the first goal for Dallastown, while Keegan Lambertson and Zach Trepanier each added one assist. South Western won the JV match, 1-0.

Central boys, Dallastown girls sweep meet at Bermudian: Cole Harris for Central York and Emily Schuler for Dallastown led the way at Bermudian Springs’ new course. In the boys’ meet, Harris narrowly edged teammate Brandon Baxter for a time of 17:52 to give the Panthers (3-0) the win. Rory McCleary finished third for Dallastown with a time of 17:57, as the Wildcats (2-1) finished second. Bermudian (1-2) and Biglerville (0-3) finished third and fourth, respectively. In the girls’ meet, Dallastown (3-0) swept the top three spots. Schuler ran a 20:00, while teammates Allison Myers and Lydia Tolerico finished second and third. Central went 2-1, Bermudian finished 1-2 and Biglerville ended the meet 0-3.

Northeastern girls, Gettysburg boys excel: Despite not having the top runner in the girls’ meet, Northeastern (3-0) runners Margaret Carroll, Bella Treglia and Marissa Pritchett rounded out the top four. Anne Blair led all runners with a time of 21:44 for Gettysburg (2-1). New Oxford (1-2) and Littlestown (0-3) finished behind the Warriors. In the boys’ meet, Gettysburg (3-0) runners Andrew Hirneissen and Drew Cale finished first and second overall, respectively to lead the Warriors to the win. New Oxford (2-1) finished second, followed by Northeastern (1-2) and Littlestown (0-3).

Northeastern 3, South Western 2: At Hanover, the Bobcats captured both doubles matches in straight sets to secure the road victory. Madison Laughman and Jiselle Castano combined to win the No. 1 match, while Taylor Forry and Aubrey Shaffer won the No. 2 match. In singles, Brynn MacDonald won a singles match.

York Catholic 5, Biglerville 0: At Springettsbury Park on Wednesday, the Irish received singles victories from Annie Stitch, Clare Brennen, and Natalie Kerchner. In doubles, Becca Marinelli and Abby Wurzbach combined to win the No. 1 match, while Maggie Bowser and Lori Schlosser won by default.