With the loss of Jared Achterberg (right) to a season-ending knee injury, Eastern York has struggled and fallen back into a three-team race with Dover and Kennard-Dale for the Division II crown. Dawn J. Sagert photo(Photo: The York Dispatch)Buy Photo

WRIGHTSVILLE — There are always bound to be some bumps in the road when a program loses a player as gifted as Broguen Nicholas.

While the Eastern York boys’ basketball team is learning to play without Nicholas, the sailing has sometimes been a little rough.

Monday evening, the Knights found out that life without one of the better players in school history may not be too bad.

Hosting Conrad Weiser in a non-league tilt at Eastern York High School, the Knights had their share of issues in the first half. Nursing a two-point advantage at the break, head coach Jon Reichard chewed into his club a bit.

Whatever Reichard said, it definitely worked. Eastern used a 23-3 blitz in the third period, was capped by a buzzer-beating 3-pointer by senior Jared Achterberg, to firmly take command. By the time it was over, the Knights were celebrating a 62-33 triumph that improved the team’s record to 3-1.

“I think, as of right now, that we’re a second-half team,” Eastern’s Dom Particelli said. “But we’re looking to change that. Against some teams, you just can’t turn it on and off like that.”

Hard lesson: Particelli and his teammates learned that the hard way in the season-opening tournament at Northeastern. The Bobcats, who won the Division II title a year ago before moving up to Division I this season, dominated the Knights, 66-49.

“We found out what we’re made of and what we need to work on,” Reichard said of the loss to state-ranked Northeastern.

“I think that was good for us,” said Achterberg, who led all scorers with 21 points on Monday. “They’re a tough opponent. I think it was a great way to really start us off and kind of open our eyes to some of the better teams that are out there. We know now how good we have to play, game-in and game-out, to be at that level.”

Dealing with pressure: One of the big keys in maintaining the same type of success that saw Reichard and company advance into the PIAA state playoffs a season ago is finding a way to play without Nicholas, who is now at Shippensburg University. While the nearly 18 points a game that Nicholas averaged last year are the most notable missing marks in the stat book, his ball-handling ability was just as important.

“When you have a four-year point guard, you can sometimes get a little more relaxed with your ball-handling,” Reichard said. “We kind of got used to nobody pressing us and being able to get it up the court however we wanted to get it up and get into any set that we wanted.”

Such a luxury is no longer afforded the Knights, who struggled at times with Weiser’s pressure in the first half. Without Nicholas, the ball-handling and scoring are going to have to be delegated among several starters this year, but mostly seniors such as Achterberg and Evan Springer.

“Jared and Evan can help relieve the pressure and they’re getting better at doing that,” Reichard said. “If they can do that consistently we’ll be OK.”

Achterberg shines: Achterberg demonstrated his value against Conrad Weiser. When he got his game in flow in the third period, there was little the Scouts could do to stop him. The 6-foot 3-inch standout poured in 15 of his 21 points in the third stanza.

“He’s got an inside-outside game,” Reichard said. “He can shoot the 3 when he has to, and when he gets inside he’s a great post player.”

Looking ahead: Now that the Knights have a couple of benchmarks to compare themselves to and against this season, the team is looking forward to using that knowledge on the court. The primary goal is winning the York-Adams Division II title, which improved greatly with Northeastern’s move out of the division.

“I think that’s what we’re looking at in the big picture,” Particelli said. “That and getting back to the Giant Center and making a nice district run.”

Stephen Wisler came off the bench to score 13 points for the Knights, who will host York Suburban in a rivalry clash Tuesday evening. 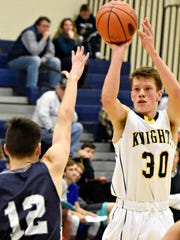 Susquehannock 7, Penn Manor 3: At York, Susquehannock rebounded from a slow start to earn a Central Penn Interscholastic Hockey League Tier 3 win. After the Comets (4-6) grabbed a 1-0 lead through the first period, the Warriors (7-2-1) responded with a three-goal second period. Susquehannock, scored four more times in the final frame. At one point, the Warriors scored seven consecutive goals to hold a 7-1 lead. Seven different players scored for Susquehannock, with Cody Smith and Alan Reider each adding two assists to go along with their goals. Timothy Schwensen had a goal and assist for the winners. Susquehannock sits at 15 points, just one point back of the Shamrocks for the Tier 3 lead.

Dover 108, Gettysburg 62: At Gettysburg, the Eagles relied on Grace Beierschmitt and Lindsay Brenneman to down the Warriors. Both Beierschmitt (100 fly, 100 breast) and Brenneman (100 free, 200 free) won two individual events for Dover, while also being part of the victorious 200 medley relay team. Gettysburg got individual wins Taylor Howery in the 50 free and 100 back.