SCHMUCK: Let's get real, 81-game baseball season is probably most fans can hope for

Let's get real. An 81-game baseball season is probably the most fans can hope for at this point.

SCHMUCK: Let's get real, 81-game baseball season is probably most fans can hope for 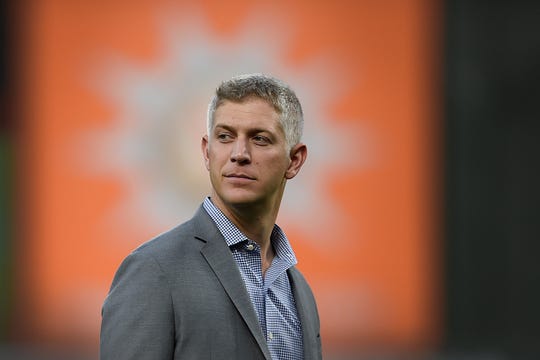 No one wants to be the bearer of more bad news in troubled times like these, so apologies in advance for another COVID-19 buzzkill.

The powers that be and the powers that want to be can talk all they want about squeezing every ounce of baseball out of whatever time frame will remain when it’s safe to come out and play, but we’ve got to get real.

The likelihood that Major League Baseball will be able to fit more than half of a normal regular-season schedule into what may or may not remain of the summer and fall after the coronavirus pandemic relents is declining with every day of new revelations about the grim reality of the transmission and mortality rates.

It’s fine to hope that the weather warms up and the “curve” dramatically flattens in May and early June, but even if it does, the extreme scheduling that would have to occur to salvage something resembling a full season and postseason would be too disruptive to be practical.

Give superagent Scott Boras credit for taking the initiative recently and crunching the calendar to come up with a plan that would allow every team to play the normal 162 games and preserve the usual four playoff rounds, but let’s be serious. Nobody is going to be playing in Game 6 of the World Series on Christmas Day.

That might be logistically possible if MLB moved all the winter games and postseason series into neutral Sun Belt stadiums, but as some players and pundits have pointed out over the past week, such a drastic attempt to save this season could do real harm to the next one.

Boras’ solution clearly is based on the desire to make sure the players get as much of their 2020 salaries as possible, which is a laudable goal for someone whose job it is to look out for the best interests of his clients. His 162-game scenario also is based on an optimistic mid-May outlook for the containment of the virus.

The problem with playing in late December is that it would leave an offseason of barely two months for some players to recover from late-season injuries and prepare for the eight-month grind that — hopefully — will be the 2021 season.

Baseball players are creatures of routine. Every one of them has an offseason program that includes a specified amount of rest and non-baseball activity and a ramp-up period to get ready for spring training. Several players have already gone on record saying that significantly shortening the offseason will increase the risk of spring training injuries.

Since the 2020 schedule has already been seriously disrupted, it would be better to grudgingly accept the reality that the season likely will be cut in half and just hope that all of it isn’t lost to the scourge of COVID-19.

Not that baseball really matters much in comparison with the pandemic, but an entirely cancelled season would reflect the sad fact that widespread transmission of the virus was still not sufficiently under control at midsummer to allow us all to come out of our homes.

Viewed through the prism of that uncertainty, an 81-game season sounds pretty good.

From a local perspective, a return in mid-July would give the Orioles about three months to salvage a significant portion of the second year of the Mike Elias rebuilding program and would allow the Ravens to start training camp and their regular season on time.

We can only hope.