STARKEY: Aldon Smith signing is proof positive that Antonio Brown will get another chance

The recent signing of troubled Aldon Smith proves that another troubled player, Antonio Brown, will get another shot in the NFL.

STARKEY: Aldon Smith signing is proof positive that Antonio Brown will get another chance 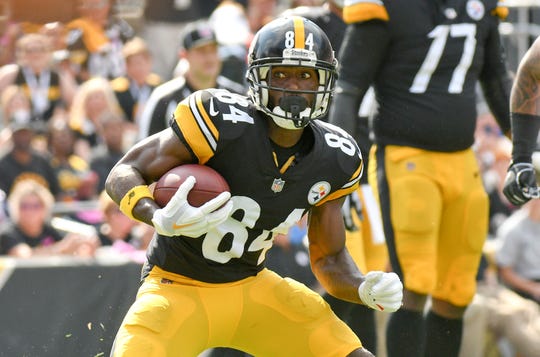 I’m not sure Antonio Brown will ever play another NFL down – I don’t know if he is capable of holding a job – but I’d be willing to bet that a team gives him a chance.

Who am I kidding?

Multiple teams will give him a chance.

Aldon Smith just got another chance. Smith, 30, reportedly signed a one-year, $4 million deal with the Dallas Cowboys, pending his reinstatement to the league. He hasn’t played since 2015 and for much of his career has racked up arrests the way Tom Brady racks up Super Bowl rings.

Smith's history: I would include the “Legal Issues” section of Smith’s Wikipedia page here, but there isn’t space – even on the Internet. I’ll just go with the bullet points, which include at least five arrests (I lost count).

►The San Francisco 49ers released Smith in August 2015 after he was arrested on charges of driving under the influence, hit-and-run and vandalism.

►The Oakland Raiders cut Smith in March 2018 after he was named a suspect in a domestic violence incident. The San Francisco Chronicle reported Smith pleaded no contest that November to two misdemeanors – violating a court order and false imprisonment (he reportedly was required to undergo 52 weeks of domestic violence counseling).

Did I mention the time Smith was arrested (charges later dropped) after an airport incident where he reportedly became belligerent with a TSA agent, who alleged Smith claimed he was carrying a bomb?

Or the time Smith was accused of biting a woman’s wrists?

As recently as June 10, 2019, Smith was stopped by police in Kansas for a traffic violation and later arrested on suspicion of DUI.

But he’s baaaaaack, predictably upon invitation from Jerry Jones. The same Jerry Jones who in 2015 saw fit to sign one Greg Hardy, who had just reached a civil settlement with a woman who’d accused him of strangling her and threatening to kill her.

The Hill example: Tyreek Hill just played in the Super Bowl. I probably don’t need to tell you (or maybe I do) that he pleaded guilty to domestic assault and battery by strangulation while in college. The police report stated Hill thew around his pregnant girlfriend “like a rag doll,” punched her in the face, repeatedly punched her in the stomach and choked her.

This past October, the Kansas City Chiefs signed Hill to a three-year, $54 million extension. That, despite a history that included a team suspension during the 2019 offseason while child abuse charges were investigated (authorities ultimately said they could not determine whether Hill caused his 3-year-old son’s broken arm.).

So please don’t tell me Antonio Brown will never get another chance. If you can play, some team will pay.

Brown better than Hill: Brown, even at 31, can play. He is better than Hill, an electrifying player with 40 touchdowns in four NFL seasons. Multiple accusations of sexual misconduct won’t stop teams from pursuing Brown. Neither would an NFL-imposed suspension. Neither will his recent house arrest or the videotaped incident of him, in front of his children, verbally abusing their mother and police officers.

Brown already had the sexual misconduct accusations hanging over him when the New Orleans Saints invited him in for a workout in late December.

This was ESPN’s Adam Schefter after the workout: “(Brown) blew away the Saints … They would like to sign him, but they’re waiting for the NFL to issue a ruling (on the sexual assault allegations).”

Lacking clarity: There still isn’t any clarity on Brown’s situation. The NFL, like the rest of the world, has more pressing issues. But commissioner Roger Goodell will get around to punishing Brown. Be sure of that.

If Brown can subsequently stay eligible for long enough, be just as sure another team will come calling. This isn’t the Colin Kaepernick situation. Owners blackballed Kaepernick because they feared he would turn away fans. Brown’s presence would have fans throwing parades – at least until his first meltdown.

And even if Brown blows his next chance, finds more trouble and doesn’t play for a couple of years, he can always count on Jerry Jones for another shot.

Aldon Smith just got one.