Penn State’s 2020 NFL draft prospects aren’t quite as bright as they were the past two seasons, each of which ended with six players selected. 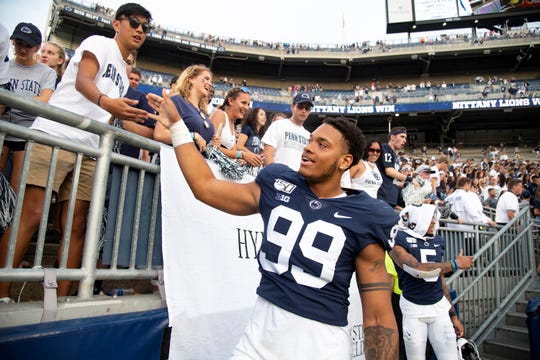 Penn State’s 2020 NFL draft prospects aren’t quite as bright as they were the past two seasons, each of which ended with six players selected.

But beyond the two potential early rounders, Penn State sends an intriguing group into draft contention, with several players offering some late-round value. In fact, Penn State has a few guys who might outpace their undervaluation.

So here’s how we rank Penn State’s 2020 NFL draft prospects.

Yetur Gross-Matos: The defensive end is Penn State’s highest-ranked prospect, a probable first-rounder in a league that values edge rushers. He made a career-high 9½ sacks last season even while shifting inside in certain defensive formations. Gross-Matos also was a versatile, 40-tackle player who made 15 of those for losses. He’s listed at 6-4, 264 pounds and runs well, which will be something to track at the NFL combine. Grade: First round. 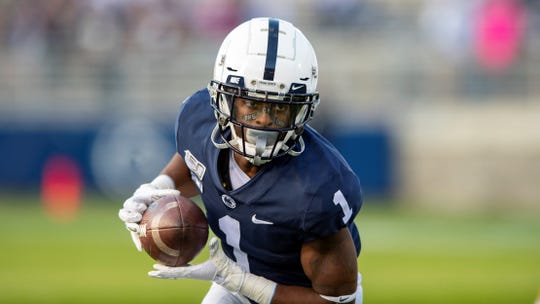 KJ Hamler: In a draft filled with receiver talent, Hamler stands out as a slot player of impact. He reminds scouts of DeSean Jackson: a receiver whose big-play potential becomes a gameplan focus. Penn State tried to make Hamler a 10-touch-per-game player, and he responded by scoring scoring eight touchdowns on 56 receptions. Hamler’s return skills are value-added, even in a league that is devaluing kickoff returns. Hamler made a good decision entering the draft, since he had little incentive to get hit without being paid in 2020. Grade: Second-third round.

Robert Windsor: The two-time all-Big Ten defensive tackle had a 40-tackle senior year in which he stood out in several big moments. Windsor took over against Iowa, making 2½ tackles for loss in a 17-12 victory. He’ll need to get stronger to play inside in the NFL is an athletic 285-pound tackle who has Day 2 potential. Grade: Fourth-fifth round.

Cam Brown: A one-time safety, Brown bulked up more than 30 pounds during his four years at Penn State, finally reaching his 230-pound goal as a senior. He turned that into an all-Big Ten season, making a career-high 72 tackles and recovering two fumbles. Brown will have some convincing to do that he’s an NFL linebacker but could flourish inside in a 3-4 defense. He and Windsor were invited to the Senior Bowl. Grade: Fifth-sixth round.

Steven Gonzalez: Having considered an early departure for last year’s draft, Gonzalez instead returned to Penn State to cross-train and refine his technique at offensive guard. He was named second-team all-Big Ten and proved vital to Penn State’s run success. Gonzalez, who snapped on the side at center last year, still needs to improve in various aspects (notably as a pulling guard) but has an NFL future. Grade: Fifth-sixth round

John Reid: Reid, Penn State’s most devoted student of the game, had an underrated season at cornerback. He made two interceptions and led the team with eight pass breakups. His size (Reid is listed at 5-10) will be an issue to address, but coach James Franklin said Reid can change minds. “He’s crafty, he understands the game and he understands body position and those types of things,” Franklin said last season. Grade: Sixth-seventh round

Jan Johnson: Johnson went from football walk-on to heavyweight wrestler to all-Big Ten linebacker (all while recovering from an early career ACL tear) to write a satisfying success story. Johnson doesn’t have great defensive speed but is far more athletic than most fans suspect and carries a strong technical presence at middle linebacker. He’ll get a few looks. Grade: Seventh round/free agent

Blake Gillikin: Gillikin is certain to get NFL auditions, as long as he doesn’t have to punt rugby style. He had a tremendous career as a four-year starter, tying for second on Penn State’s career-average list (43 yards per attempt) and setting a school record with seven punts of 65 yards or longer. And after the NFL, Gillikin plans to become an orthopedic surgeon. Grade: Free agent

Garrett Taylor: Taylor, a two-year starter at safety, was a prolific tackler, finishing second on the team with 84. The all-Big Ten selection and team captain will have plenty of convincing to do regarding his skillset in pass defense, which showed some lapses during the season. Grade: Free agent

Nick Bowers: The tight end finally got a healthy season in 2019 and made it productive. Bowers averaged 21.4 yards per catch (a team-high among players with at least 10 receptions) and scored three touchdowns to become a surprising big-play threat. He also was effective blocking in two-tight-end formations, which Penn State used more of last season. It will be interesting to see what Bowers does if he gets a shot. Grade: Free agent

Dan Chisena: Why not? The receiver was voted MVP of the Tropical Bowl all-star game, where he caught five passes (two more than he did in all of 2019) for 155 yards and two touchdowns. Chisena is a speedster who is adept at making special-teams tackles, particularly as a punt-return gunner. Maybe he has a future. Grade: Free agent