Penn State's self-confidence is soaring after Saturday's 35-7 triumph over Purdue. The Nittany Lions are off to a 5-0 start. 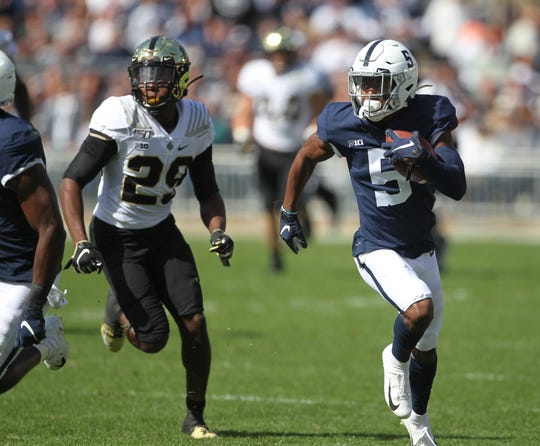 “I’m not even trying to be coach Franklin right now,” Penn State quarterback Sean Clifford said in the middle of a very Franklinesque explanation Saturday at Beaver Stadium.

Penn State, Clifford said, is the “hardest-working team in America,” from players to trainers, and swims in the deep end of the confidence pool. He’s not alone in thinking that. At 5-0, with the heart of its schedule about to arrive, Penn State feels like it’s in an exceptional place.

Penn State’s 35-7 victory over Purdue offered as well-constructed a day as coach James Franklin could have wanted. The Lions won their fourth game this season by at least 28 points, strong-armed Purdue’s offense into submission and scored touchdowns on their first four possessions.

They also made just enough mistakes to give Franklin and his staff reason to yell at halftime and to make Sunday’s film-study session look like detention. Clifford said he planned to be there early.

“I’m feeling really confident about this team, this unit, this organization from top to bottom,” said defensive end Yetur Gross-Matos, who had two sacks.

Demanding schedule looms: The Lions figure to face its schedule’s most demanding stretch over the next month, though who really knows anymore with the Big Ten. Iowa scored just three points and allowed eight sacks against Michigan. Penn State’s defense is chop-licking after nearly setting a school record with 10 sacks vs. Purdue — and thinking it could have had more.

“It was an OK day,” said defensive end Shaka Toney, who made three of those sacks.

This is how they’re living now. The Lions have armed themselves with an overwhelming level of self-belief, having won their first two Big Ten games by a combined score of 94-7. 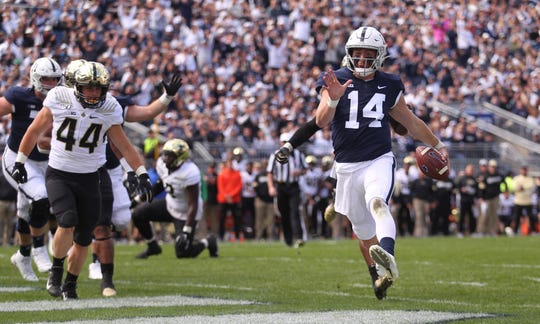 The defense has allowed two touchdowns in its last three games. Penn State is the last FBS team not to allow a first-quarter point this season (It has outscored opponents 69-0 in opening quarters). And, for the second straight game, Clifford was responsible for four first-half touchdowns (three passing, one rushing).

“There’s a couple of dominant teams in the Big Ten this year,” Purdue coach Jeff Brohm said, “and I think that’s one of them.”

Hasn't been challenged much: At this point, though, that’s difficult to know. Penn State hasn’t been challenged in the Big Ten, and really has met only one formidable opponent in Pitt, which the Lions shut out for three quarters anyway. Still, even with Saturday’s quibbles, Penn State had pretty good answers.

Frustrated by the offense’s listless third quarter, in which it totaled 42 yards of offense and punted four times? Clifford would like to remind you how it rebounded with a 7-play, 87-yard scoring drive in the fourth quarter, on which freshman running back Noah Cain gained 64.

Concerned about the mistakes on special teams, including several misplayed punts by Hamler? Hamler would like to remind you that he’s a threat every time he touches the ball.

“If the gunners are not in my face and I have room, I’m going to take a risk,” Hamler said, “because I think I can make something out of nothing.”

Receiver Jahan Dotson, who scored on a 71-yard touchdown reception, said he thinks Penn State’s receivers room is among the best in the country. Toney called Gross-Matos the best end in the country.

Franklin said that the Lions have been playing “championship-level" defense for several weeks. Asked what that means, linebacker Micah Parsons said, “Ten sacks.”

Lots of self-belief: From where does Penn State derive its self-assurance? Its blend of athleticism, depth and approach, which Franklin called consistent, even though the results sometimes are inconsistent.

“But if it becomes emotional, you’re finding ways to get people angry and turn the opponent into like a monster, we don’t do that. We focus on Penn State. We focus on our process and our approach. We respect all our opponents but we fear none. We’ve put in some really good weeks of preparation that I think has led to a confident football team. We need to do it again.”

The Lions have plenty going right for them now, but that can change quickly. Just like it did for the offense in the third quarter. That’s why Clifford said he plans to speak with the team’s head of performance psychology Sunday to determine what’s next.

“That’s the big thing for us,” Clifford said. “We have all the talent in the world. We just have to have the right mentality play in, play out, every single time.”