ANTHONY: Randy Edsall's legacy could be cemented or simplified by UConn's move to Big East

With UConn's move to the Big East, the legacy of Susquehannock High School graduate Randy Edsall with the Huskies could move in one of two directions.

ANTHONY: Randy Edsall's legacy could be cemented or simplified by UConn's move to Big East 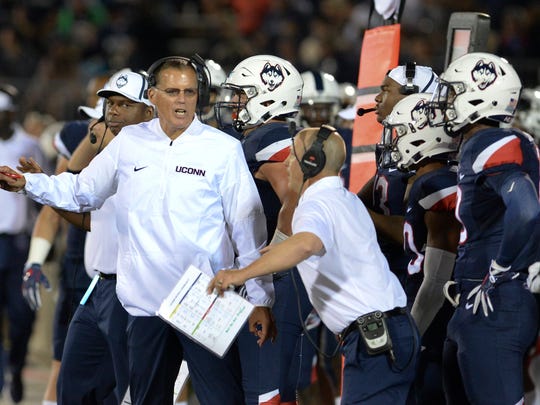 I can hear Randy Edsall a handful of years down the road, being able to say one of two things.

Something along the lines of, “Building the program back to where we all wanted it, especially with the move to the Big East and those things in 2019, is something I’ll always look back on with a great pride."

Or something along the lines of, “I couldn’t help those friggin’ people. No one could.”

UConn’s move to the Big East and football’s extrication from the American Athletic Conference cemented the legacy of the Susquehannock High School graduate, in a way, or at least has the potential to change the complexion and wording of that legacy.

For better or worse, the situation is different now than it was just a week ago. Edsall, 60, is at a fork in the road of his career and he’s steering the football program, for sure, but only down the direction the university has chosen.

No matter what happens through the rest of what is known as REStorred and Edsall 2.0, Edsall will eventually leave UConn for good with his 1999-2010 body of work to cite as his legacy and his 2016-whenever return to cite, perhaps, as something beyond his control.

There is an uncertain future of (likely) conference independence and a complicated state of existence for UConn football. If it works, terrific, and Edsall will have a lot to do with it. If it doesn’t, bummer, and Edsall won’t be alone out in front of it all and viewed as a coach who couldn’t make the project work.

Challenges ahead: I believe Edsall, David Benedict and those they work closely with can actually keep UConn football as something to embrace, something with an interesting niche on the regional or even national landscape. Leaving the American Athletic Conference was not the death of the program, though unique challenges are ahead.

I’ve thought about Edsall’s legacy quite a bit in recent months, as the program’s problems snowballed and conversation about a tenable future for UConn football accelerated. I wondered not whether Edsall is a capable football coach — I think very highly of him personally and professionally — but whether anyone was capable of getting UConn back to where it wanted to be.

It seemed like an increasingly helpless situation no matter who was at the helm, yet Edsall is headed into his third year presiding over a really flat period in the program’s BCS/FBS history. While that wouldn’t be his lasting or complete legacy, it would certainly be part of it, and it would be the final snapshot of what has been a terrific career. Few people have been more important to UConn athletics over the past several decades.

Now, when looking at it solely from the viewpoint of how Edsall’s overall contributions are judged, does it really matter what happens over the next few years? If the program can’t gain traction for reasons having to do with the Big East move, one could argue that we were never allowed to see what Edsall could make of it. He essentially tore down what existed and started anew, trying to slowly turn a ship, going with extraordinarily inexperienced players and remaining dedicated to a process that always was going to ... really … take … a … lot … of... time.

He built UConn into winner: Edsall built UConn football into a winner. He took the Huskies from FCS to BCS to Big East championships and to the Fiesta Bowl. That was UConn’s last winning season, 2010. Of course, some would argue that Edsall himself started football’s unraveling by leaving in the middle of the night after the Huskies played in the Fiesta Bowl on New Year’s Day 2011, that if he stuck around the Huskies would have never hit the depressing rut that followed.

There were two mediocre years and one disastrous one under Paul Pasqualoni, three chaotic years under Bob Diaco, who did get the Huskies to a bowl game in 2015 before the fish-cake debacle of 2016.

Edsall returned to rebuild something that was broken but ultimately was asked to preside over the program while working a job he didn't exactly sign up for.

So this Big East move could be a great opportunity for Edsall, or a potential asterisk to apply to his second stint. What became of UConn football in the AAC was going to be all on Edsall. What becomes of it outside of the AAC is not all on him.

An opportunity: Let’s look at it as an opportunity. I hope Edsall is, though he’s made clear he is done speaking about the topic. He sent a statement to the media Wednesday and he’s “On to Wagner College," the Huskies’ first opponent in 2019.

As he should be. UConn has to win and UConn needs support. If Edsall can improve the team, if Benedict can properly position the program, if support follows … well, we may have something here. Independent football might be a blast. Make it fun, UConn. Keep us interested.

Have you seen the product and the interest in recent years as a member of the AAC? It can't get much worse than it's been, and it's on UConn to make it something better with a patchwork effort of their own design instead of reliance on affiliation with a conference that includes bowl ties and TV money. That wasn't taking them much of anywhere, anyway.

If Edsall coaches this tornado and leaves the program in a better place than it was where he found it in 2017, he’ll deserve a great amount of credit.

If he doesn’t, he can always say the situation was beyond his control.