SCHMUCK: Picking Adley Rutschman at No. 1 was no-brainer, and Orioles didn't overthink it

Picking Oregon State catcher Adley Rutschman with the No. 1 overall draft pick was a no-brainer. Thankfully, the Orioles didn't overthink it.

SCHMUCK: Picking Adley Rutschman at No. 1 was no-brainer, and Orioles didn't overthink it 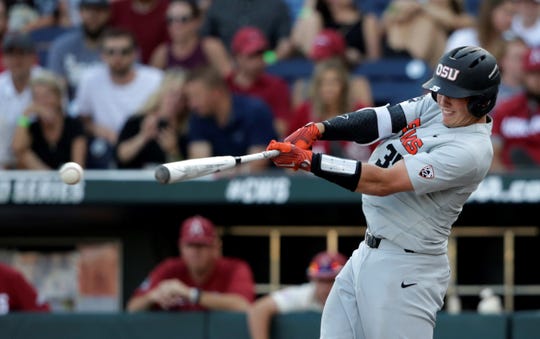 Everyone probably knows by now what the Orioles did with the top overall pick in the Major League Baseball draft, but just as important was what they didn’t do.

They didn’t outsmart themselves. They picked the guy that everybody would have picked. Oregon State catcher Adley Rutschman is the whole package and you didn’t need a lot of fancy analytics to prove that he was the best amateur player in the country.

He wasn’t the only good choice, of course. The Orioles could have gone with high school shortstop Bobby Witt Jr. and nobody would have batted an eye. But choosing anybody other than one of those two would have been an act of front office malpractice … or, perhaps, an act of such genius that a lot of us armchair experts would be trying to scrub their second-guess columns off the internet three years from now.

Little margin for error: We won’t know anything for sure until then, but the Orioles didn’t have much margin for error with their second No. 1 overall pick in franchise history. New general manager Mike Elias had to make it count and could not afford to make everyone wait several years to find out if he’s the smartest guy in the game.

He would surely tell you that it was not a matter of playing it safe, but there is a time to make the obvious pick and there will be times to buck the consensus and go with your gut.

Even if Elias and his new-age player development staff had divined that there was someone outside this year’s conventional draft wisdom who might turn out to be the best player in the draft, it would have been too risky to put his analytics program on trial this early in his tenure.

The last thing the club needs right now is a resounding chorus of “This better work!”

Comparisons to 2010 draft: This year’s top-heavy first round has been compared to the 2010 “Bryce Harper” draft, when the Washington Nationals took Harper with the first pick overall and the Orioles took Manny Machado with the third. The two of them recently signed free-agent contracts worth a combined $630 million, so there’s definitely a time to go with the no-brainer.

The Orioles actually have a history of doing that. They took Ben McDonald with their only other “one-one” pick in 1989 and would only regret it because his arm didn't hold up long enough for him to build a Hall of Fame career. They used the 20th overall pick the following year to take Mike Mussina, who will be arriving in Cooperstown next month.

They’ve had nine top-five overall picks since then — including Rutschman — and five of them turned out to be productive major league players. Machado (3) obviously is the best, but Dylan Bundy (4), Kevin Gausman (4), Matt Wieters (5) and Jeffrey Hammonds (4) were unassailable choices in a process where a 50% success rate is tough to beat.

Remember, the O’s also used the ninth choice in 2006 to choose Billy Rowell over Max Scherzer and Tim Lincecum, who have five Cy Young Awards between them with Scherzer still around to add to that total. They used the fifth overall choice in 2009 to pick pitcher Matt Hobgood 20 slots ahead of Mike Trout.

For better or worse, Rutschman arrives in the Orioles organization as the face of the team’s long-term rebuilding project, much as Matt Wieters would be viewed when he was drafted fifth overall just days before Andy MacPhail was named Orioles president of baseball operations in 2007.

That doesn’t mean that the success of the rebuilding project will depend on Rutschman becoming the next Joe Mauer, but the acceptance of this painful transition period by the fans depends on them feeling confident that Elias knows what he’s doing.

That can’t be proved in one draft, but picking the player at the top of everybody’s dance card sends a clear early message that the Orioles are willing to do — and spend — what it takes to get where they want to go.

It was the smart play. That’s why they call it a no-brainer.