The fabled high school boys' tennis career of Dallastown standout Holden Koons will come to close over the next month. 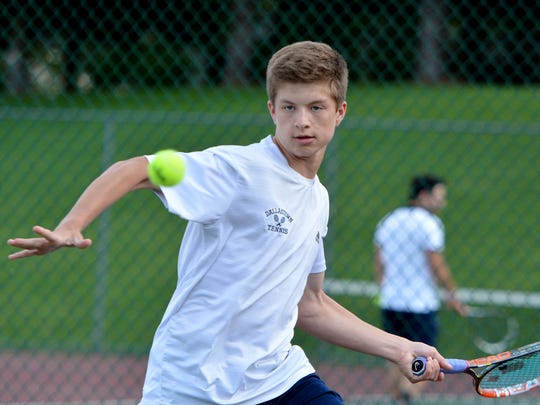 That’s not fair, but that’s the way it is. Life isn’t always fair.

That doesn’t mean, however, that we should allow the looming end of one of the great athletic careers in York-Adams League history to pass by without proper recognition.

The career we are talking about belongs to Dallastown High School’s Holden Koons.

Individual success: In 2016, Koons joined the Wildcats’ program with plenty of advance fanfare, at least in tennis circles. Great things were predicted for Koons before he hit a single high school serve. If possible, over the next four seasons, he’s exceeded the lofty expectations that were heaped upon him.

Koons, if you didn’t notice (and many of you likely didn’t), recently captured his fourth straight York-Adams League Class 3-A boys’ singles championship.

This weekend, it would be a major surprise if he didn’t capture his fourth straight District 3 3-A singles crown at the Hershey Racquet Club.

Then, on May 24-25 back at HRC, Koons will attempt to capture the one major individual scholastic title that has eluded him — a PIAA 3-A state crown. Koons lost in the first round as a freshman, in the quarterfinals as a sophomore and in the championship match as a junior.

Winning a state title, however, will be no easy task. All four 3-A state semifinalists from 2018 are expected to return for the 2019 PIAA event, including defending champion Sameer Gangoli of Great Valley, who outlasted Koons in last year’s state final, 6-1, 6-7 (6), 6-2.

If Koons can capture his first state singles crown, he will join an elite group, becoming just the fourth York County player to accomplish that feat. The others are York High's Mason Gerhart (1965), York High’s Jan Bortner (1971) and West York’s Brian Nachtigall (1999). Gerhart and Bortner won their titles when there was just one class in tennis. Nachtigall won a 2-A crown.

With Holden playing No. 1 singles, the Wildcats have cruised to four straight unbeaten York-Adams Division I seasons, going 32-0 in D-I matches during that time span.

Next week, the 5-foot, 11-inch left-hander will try to help the unbeaten Wildcats (15-0) capture their first District 3 3-A crown since 2006. Dallastown, which owns four district team titles overall, finished second in 2018, losing to Hershey, 3-1, in the title match.

Less than two weeks ago, however, Holden earned a straight-set win to help the Wildcats capture a 3-2 thriller over the Trojans (15-1) in what many believe was a preview of the 2019 district final. Dallastown and Hershey will enter districts as the No. 1 and No. 2 seeds, respectively.

Headed to James Madison: By the end of May, Holden’s legendary Dallastown career will be over, and he’ll get ready to take his racquet to James Madison University in Harrisonburg, Virginia, to begin his NCAA Division I journey. According to the Tennis Recruiting Network, he’s one of the top 75 senior boys’ tennis recruits in the nation.

Before he heads to JMU, however, Holden still has some very important high school business to take care of.

Still, no matter what happens over the next month, Koons’ scholastic legacy has already been firmly set.

Quite simply, if York County had a Mount Rushmore for boys’ high school tennis, Holden’s face would be etched in granite.

— Steve Heiser is sports editor of The York Dispatch. He can be reached at sheiser@yorkdispatch.com