VIDEO: York High head coach Russ Stoner talks after the Bearcats claim a share of the D-I title with a 54-14 win over Central York York Dispatch 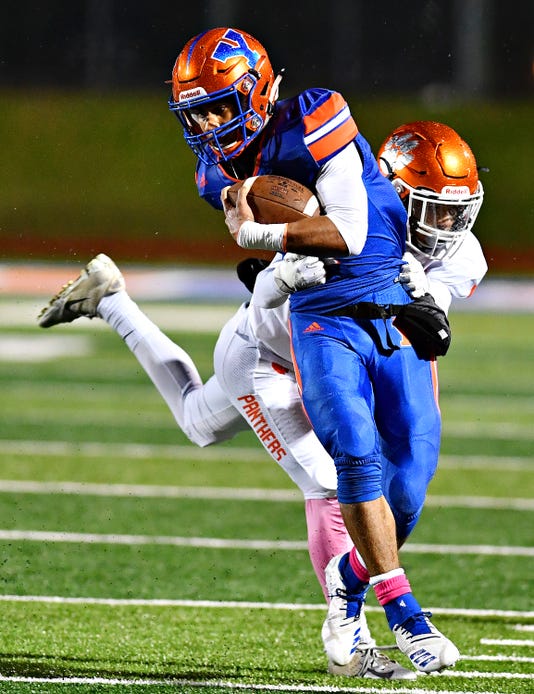 For the big schools in the York-Adams League, it’s a new opportunity to rewrite an old story line.

By now, the league’s coaches, players and fans are undoubtedly tired of hearing about it.

Unfortunately, the only way to change the narrative is to change the results. Until then, the jeers and jabs from across the region will continue.

By now, you probably know what this column is about — the inability of big-school Y-A teams to hang with the big schools from the Lancaster-Lebanon, Mid-Penn and Berks leagues come district football playoff time.

Since District 3 began its football playoffs in the early 1980s, no Y-A team has ever won a title in the largest postseason classification. For a while, that was Class 3-A, later it became 4-A, and now it’s 6-A.

In addition, only one Y-A team has ever won a district big-school football championship of any kind — West York in 2008, when the Bulldogs took a 3-A title. At that time, there were only four PIAA football classifications.

Starting Friday, six big-school Y-A teams will again attempt to make history. The local league will send two teams each into the district playoffs in 6-A, 5-A and 4-A. If the 2018 power ratings are accurate, however, none of those six is a threat to finish as a district champion. None of the Y-A teams is seeded higher than fifth.

It’s enough to give the Y-A teams a serious inferiority complex.

Still, 2018 presents another opportunity for a reversal of fortune. One thing that may help the local teams is that so little is expected of them. They may be able to catch some teams off guard. In addition, the low regard for Y-A teams across the district should provide plenty of motivation for the local squads to prove the doubters wrong.

So, given that background, here’s an analysis of how the six Y-A big-school teams could  fare in their district openers:

Red Lion celebrates after defeating York High 21-20, Friday, Oct. 5, 2018. The Lions hope to do some more celebrating on Friday night after their District 3 Class 6-A opener vs. Wilson. John A. Pavoncello (Photo: The York Dispatch)

Class 6-A: No. 5 seed Red Lion and No. 6 Central York will both have to go on the road Friday night.

Both the Lions and the Panthers  carry 8-2 records into the playoffs, while both of their foes are 7-3.

Don’t let those records fool you. Both the Lions and Panthers must be considered underdogs against traditional district powers.

Central York takes on a Central Dauphin team that has lost to Manheim Township, Harrisburg and State College — three of the best teams in the state. The combined record of those three teams is 27-3. The Rams also own three District 3 championships.

Central York also has some uncertainty at quarterback. Delaware recruit Cade Pribula missed most of last week’s Y-A Division I showdown vs. York High with an injury. If Cade Pribula can’t go vs. Central Dauphin, his brother, Beau Pribula, is expected to start. Beau Pribula has exceptional talent, but he’s just a freshman.

Class 5-A: York High (9-1) has been the most talked-about team in the Y-A League all season — with good reason.

The Bearcats possess one of the most dynamic offenses in the state, averaging more than 50 points per game.

After a bit of a late-season funk, the Bearcats appeared to get their swagger back in a 55-14 thrashing of Central York in a regular-season showdown for the Y-A D-I championship.

Friday, No. 6 seed York High plays host to a Northern York team that would appear to be overmatched. The 11th-seeded Polar Bears are 6-4.

York High should give the Y-A League its first-ever 5-A victory and appears poised to make a prolonged district run.

Northeastern (5-5), meanwhile, slipped into the 5-A playoffs as the No. 14 seed — the last team to make the field. The Bobcats, however, appear to have a fighting chance when they travel to No. 3 seed Shippensburg (9-1).

Northeastern has shown the ability to hang with formidable foes, beating Red Lion and nearly upsetting York High. Shippensburg, meanwhile, is 3-0 vs. Y-A foes, but two of those wins (vs. Dover and West York) came by just seven points each.

The Bulldogs visit No. 8 seed West Perry (7-3) in a contest that looks very winnable for West York. The Bulldogs are surging, having won five straight, including their best performance of the season last Friday in an 49-21 win over rival Dover. West Perry, meanwhile, has struggled of late, losing three of its last four.

Gettysburg gets a first-round bye and will travel to No. 4 seed Conrad Weiser (8-2) on Friday, Nov. 9. The seedings and records indicate that game should be a toss-up.

Overview: The bottom line going into the 2018 district openers is pretty simple — the Y-A big schools need to win some football games if they want to shake their reputation for playoff failure.

That’s the only way to silence the critics. Another big-school district 0-fer would be a severe disappointment. This year, it should not happen.

The opportunity is there for the Y-A big schools to make a statement.

Friday night, we’ll find out what kind of statement it will be.