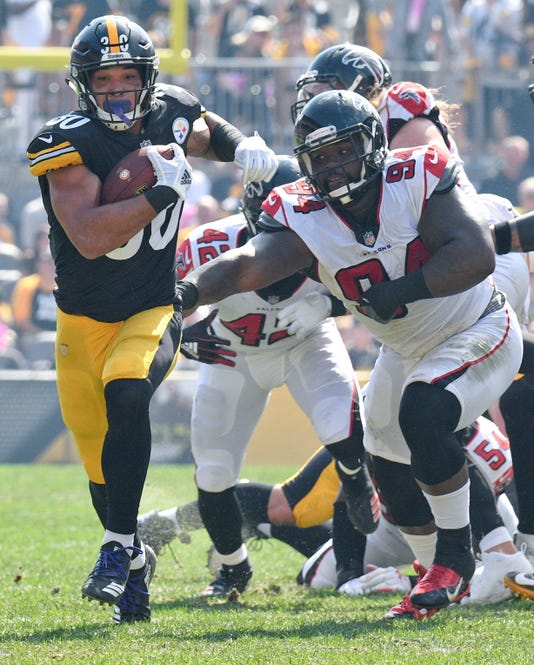 It was really a chicken-or-the-egg argument.

I still don’t know the answer. But after seeing Conner run Sunday against Atlanta, I suddenly have a craving for an extra large omelette.

Conner was exceptional against the Falcons, rushing for 110 yards. He also had 75 yards receiving.

“It’s not a relief,” Conner said. “We just feel like we are back on track. We were playing Steelers football.”

As we outlined in advance of the Steelers’ 41-17 victory over the Falcons, the most troubling aspect of the Steelers’ approach to running the football in their two home defeats against Baltimore and Kansas City is that they either got away from the run or didn’t bother trying to establish it during contests that were highly competitive into the third quarter.

At times, that was easy to understand, given the inconsistent nature of Conner’s running and the blocking in front of him. During other stretches, the question needed to be asked: “Why not run when the offense was becoming so one-dimensional through the air?”

So they were unenthusiastic about trying to run, and they were bad when they actually tried.

Sunday against Atlanta, they were excellent in both categories. They ran as many times as they passed — 29 apiece. And when they did run, it was effective, averaging 4.5 yards per carry. Conner averaged 5.2.

“He did a hell of a job,” tackle Marcus Gilbert said of Conner. “We just kept our composure. We believed in ourselves. We had efficient downs.”

The Steelers believing in their own run game is the most important part of that quote.

Key drives: Two drives were particularly important when it came to the offense convincing the coaching staff that sticking with the run was worth the effort.

The first was the opening drive of the game. The Steelers scored a touchdown on it. Conner had seven touches along the way including the carry across the goal line.

That gave the Steelers their first game-opening score of the season.

“We’ve been talking about that as an offensive group,” center Maurkice Pouncey said. “Get out there and move the chains. Because when the other team gets you (on the first drive) with a three-and-out, that other team has the motivation.”

What the Steelers did coming out of the locker room to start the third quarter was even more important. That touchdown jaunt featured five runs by Conner, two by Stevan Ridley and a short pass to Conner, as well.

No panic: Unlike what happened in games that were still close in the third quarter against the Ravens and Chiefs, the Steelers didn’t panic. They didn’t become too reliant on the pass game.

Was anything communicated from the offense to the coaches about a desire to stick with the running backs to start the second half?

“It wasn’t so much anything that was said,” Pouncey explained. “It was just more about the plays that we liked. The plays that were working against them. Obviously, they saw some plays that they liked up top in the box and they called some great plays.”

A viable option to Bell: Until — or unless — Le’Veon Bell returns to the Pittsburgh Steelers, Conner doesn’t have to be a replica of him at running back. He just has to be good enough to be trusted by Mike Tomlin and offensive coordinator Randy Fichtner. He has to be viewed as a viable option.

Since the Falcons were 24th against the run in the NFL entering the game, pushing that agenda Sunday was a good idea.

Sunday, the Steelers used Conner as they would’ve used Bell. That statement isn’t simply in terms of how they ran him, and how they deployed him in pass patterns. But it is also reflective of how they relied on him to keep the defense off-balance so it couldn’t brace itself for the pass 100 percent of the time.

Ben Roethlisberger was pass-centric to the level that he took 112 snaps that were pass plays in the previous two home games of 2018.

Conner doesn’t need to make us a full omelette every week. The occasional sunny-side up will do.

Sunday’s game against the Falcons went a long way toward making Tomlin and Fichtner return customers.

Tim Benz is a Tribune-Review staff writer. You can contact Tim at tbenz@tribweb.com or via Twitter @TimBenzPGH. All tweets could be reposted. All emails are subject to publication unless specified otherwise.