HEISER: We are in the midst of an historic season of high school football in York County — and the best may be yet to come.

OK folks, it’s time to take a moment and reflect on the fact that this is turning into a historic York County football season.

Some of the offensive numbers being put up, particularly in York-Adams Division I, are simply staggering, and we’re barely halfway through the regular season.

There’s no telling the kind of final statistics that may ultimately be piled up, especially if some of the D-I teams make extended District 3 playoff runs.

There are a couple of reasons for that.

First, there’s no disputing that offensive football has changed dramatically on the local high school landscape in recent decades.

The game played today is much more of a wide-open, aerial affair. The days of 3 yards and a cloud of dust are ancient history.

Defenses, meanwhile, have simply failed to keep up.

Second, and more importantly, the skill-position talent in York County this season is probably as good as it’s ever been.

Three D-I players, in particular, have been absolutely off the charts statistically. All three have NCAA Division I talent.

Cade Pribula: Let’s start at quarterback, since that’s the most high-profile position on the field.

Assuming Central (5-1 overall) plays at least one District 3 Class 6-A playoff game, which appears a safe bet, and Pribula continues his current pace, the standout QB could finish the 2018 season with about 3,500 yards passing and 40 touchdowns.

No QB in county history has come remotely close to that kind of season.

Dayjure Stewart: Stewart had to wait his turn to become the featured back in Russ Stoner’s devastating Bearcats attack. 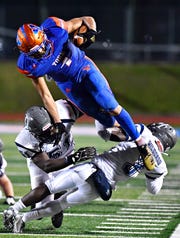 York High's Dayjure Stewart is averaging more than 230 yards rushing per game and more than 13 yards per carry this season. (Photo: The York Dispatch)

The 6-foot, 200-pound Stewart is making the most of his opportunity as a senior in 2018 and is well on his way to eclipsing the single-season marks set by Dorsey in 2017.

Again, assuming unbeaten York High (6-0) plays at least one District 3 5-A playoff game, and Stewart maintains his current pace, his final numbers could look like this: about 2,500 yards rushing and 44 TDs.

If Stewart and the Bearcats can make an extended playoff run, Stewart could even threaten the single-season York County rushing record of 2,845 yards set by Alex Cooley of Eastern York in 2012.

Just a side note. Stewart has helped the Bearcats average 59 points and more than 630 yards per game. If York High continues that kind of pace, it’s safe to say those numbers would shatter any previous county marks. 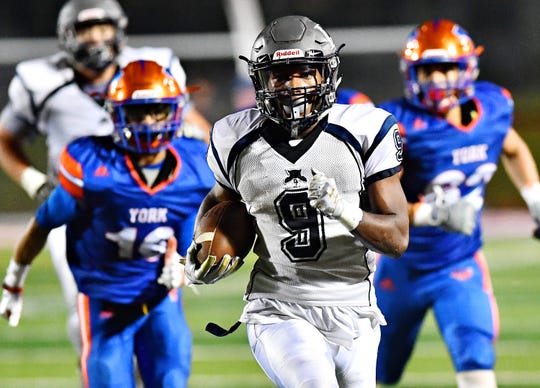 Dallastown's Nyzair Smith is on pace to rush for more than 2,000 yards in a second straight season. (Photo: The York Dispatch)

Nyzair Smith: In most any other year, Dallastown's Smith would undoubtedly be considered the biggest star in the York-Adams League.

After all, the senior standout is coming off a junior season when he led the league with 2,055 yards rushing while averaging 11.3 yards per rush and scoring 32 TDs.

This season, running against defenses stacked to stop him, the 5-10, 187-pound Smith is still excelling. He’s piled up 1,242 yards on a league-leading 148 rushes, averaging 8.4 yards per rush and 207 yards per game. He’s been particularly effective of late, averaging more than 260 yards in his last four games.

Dallastown (3-3) is on the District 3 6-A playoff bubble, but even if the Wildcats don’t make the playoffs, Smith is again on pace to finish the regular season with more than 2,000 yards rushing.

Back-to-back 2,000-yard rushing seasons is an almost unheard-of accomplishment in these parts.

Video-game numbers: The numbers being put up by Pribula, Stewart, Smith and the York High offense sound like something out of a video game.

To expect those three players, and the Bearcats team, to continue at the current pace might be unfair. After all, down the stretch, the competition, especially come district playoff time, will get tougher, and the weather will get worse.

Still, it’s been a blast to watch so far, and  it makes you eager to see what might unfold over the coming weeks.

Tough job looming for coaches: There’s also one other thing to consider — something that the Y-A Division I coaches may have been mulling already.

At the end of the season, who will be selected the D-I Offensive Player of the Year — Pribula, Stewart or Smith?

As it stands now, that would be one tough call. There is a ton of football yet to play, however, and that decision may get easier as the season wears on — but don’t bet on it.

None of the county’s terrific trio shows any signs of slowing down.

That’s great news for area football fans, who are getting to see local history being made.