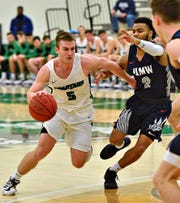 The York College basketball season is over and the coronavirus outbreak has put the Spartans' spring athletic programs on hiatus.

However, that hasn't stopped one of the school's standouts from piling up some more honors.

Wagner is the Spartans' fourth NABC All-American, joining Jason Bady (2018-19), Nick Brady (2009-10) and two-time All-American Chad McGowan (2006-07 and 2007-08) as Spartans who have earned the honor. Bady and Brady were third-team picks, while McGowan was a first-team (2007) and a second-team (2008) pick. All four players earned the Capital Athletic Conference Player of the Year award in the years they were named All-Americans.

That honor came one day after he picked up a pair of first-team All-Mid-Atlantic Region accolades, as announced by the NABC and d3hoops.com.

"What a great honor for Jared, to be recognized as one of the best players in the region and country by the coaches that we have competed against is an incredible accomplishment," York head coach Matt Hunter said in a news release. "Jared earned his spot among the best with hours and hours of hard work and it was awesome to watch it pay off over the course of his career through his development, team and program success and now some incredible recognition.  This is a special day for Jared and our Spartan basketball program."

Wagner, a senior guard, had one of the best individual seasons in Spartan history. He averaged 18.3 points, 6.1 rebounds, 7.0 assists and 2.8 steals per game. He shot 50.3% from the floor, 35.3% from 3-point range and 73.5% from the foul line. He started all 29 games for the Spartans, who finished 23-6. York earned its second Capital Athletic Conference Tournament championship in the last three years and advanced to the second round of the NCAA Division III Tournament for the third consecutive year. Wagner led York by averaging of 32 minutes per game.

Wagner led the CAC in points per game, assists per game, steals per game and free throws made per game. He was also ninth in rebounding, sixth in field goal percentage and second in free throws attempted per game.