Tampa Bay Buccaneers head coach and York High graduate Bruce Arians will give the commencement address at York College on May 16. 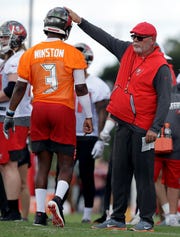 The York College graduating class of 2020 will begin their post-college careers with a speech from a man that spends his time motivating some of the elite athletes in the world.

York High graduate and Tampa Bay Buccaneers coach Bruce Arians will give the commencement address at York College on May 16.

In addition to his address during the ceremony which will begin at 10:15 a.m. on the campus mall, Arians will also receive an honorary doctorate of humane letters from the college.

Arians is entering his second season with Tampa Bay after a year away from coaching following his retirement in early 2018. The Buccaneers went 7-9 in Arians' first season.

Before he came out of retirement and joined Tampa Bay, Arians was the Arizona Cardinals coach from 2013 to 2017 and was also the interim head coach of the Indianapolis Colts in 2012.

Arians was named the Associated Press NFL Coach of the Year in 2012 and 2014 and is the only coach in league history to win the award multiple times in three seasons with different teams. Arians is one of 12 NFL coaches to ever earn the honor more than once.

Prior to becoming the head coach of the Colts and Cardinals, Arians served as the Pittsburgh Steelers wide receiver coach from 2004 to 2006 and then offensive coordinator from 2007 to 2011.

Arians' first NFL gig was as a running backs coach from 1989 to 1992 after he spent six seasons as the head coach of NCAA Division I Temple University.