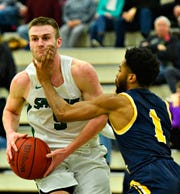 The Spartans earned a 68-62 victory over visiting St. Mary's (Maryland) to finish tied for first in the conference with Christopher Newport at 9-1. York improved to 20-5 overall. The Spartans will have a bye in the first round of the upcoming CAC playoffs. CNU won the coin flip and the No. 1 seed for the tournament playoffs. York and CNU have now shared the last three CAC regular-season crowns.

York has won 10 straight and has now won at least 20 games in three straight seasons.

Wagner moved into the top 10 in scoring on the Spartan career chart. He now has 1,436 points

Spartans go over century mark in women's hoops: The York College women's basketball team had been scuffling of late, losing two straight and three of its past four.

Those struggles came to an end on Wednesday night when the Spartans rolled to a 103-67 CAC win at St. Mary's (Maryland).

The Spartans did trail after one quarter, 20-17, but erupted for 86 points over the final three quarters to cruise to the win. It was the highest-scoring game of the season for the York women.

York improved to 15-10 overall and finished 6-4 in the CAC regular season. St. Mary's fell to 3-21 and 0-10. The Spartans finished in third place in the regular-season CAC standings, while St. Mary's finished sixth.

York will now play host to St. Mary's in a CAC playoff opener on Saturday.

Spartans roll in women's lacrosse opener: The York College women's lacrosse team opened its season in impressive fashion on Wednesday with a 13-6 nonconference pounding of Washington in Chestertown, Maryland.