After playing four seasons at York College, Mike Frauenheim is spending two seasons learning how to coach under a hall of fame mentor at Kentucky. 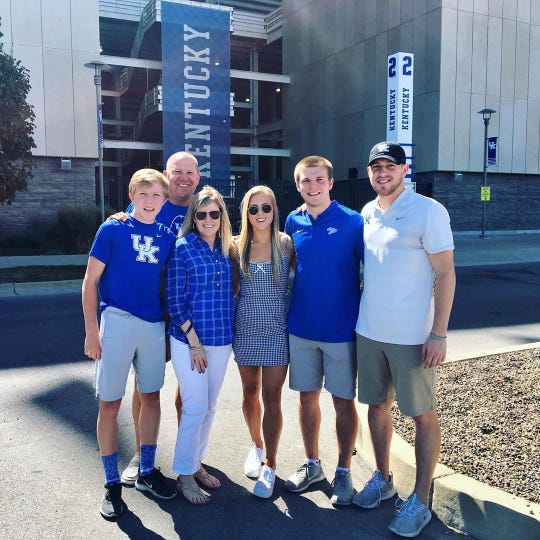 Former York College guard Mike Frauenheim, right, and his family pose for a photo at the University of Kentucky. Frauenheim joined Kentucky as a graduate assistant on the men's basketball coaching staff this season. (Photo: Courtesy of Mike Frauenheim)

When Mike Frauenheim sat down in the University of Kentucky basketball offices in July, his mind was half looking ahead to the nearly 10-hour drive back to New Jersey the next day.

The meeting, a mandated exit interview as a part of his required internship to graduate from York College with a degree in sports management, was supposed to mark the end of his summer working with the Kentucky men’s basketball program.

Then something crazy happened.

The former York College guard was offered a two-year position as a graduate assistant on the Wildcats’ coaching staff after his predecessor took a gig for another program.

“It’s kind of surreal. You don’t really believe it,” Frauenheim said about landing a job with one of the bluebood programs in all NCAA Division I basketball. “It doesn’t really hit you at first, because you’re looking for a job constantly and you don’t think anything is going to work out. You don’t know what is going to happen and then you get an opportunity like this and you don’t really know how to react.”

Born to coach: Frauenheim was raised to get into coaching. His father, also named Mike, coached basketball at Immaculata High School in New Jersey for 13 seasons and his grandfather, Pierce, coached football at the same school and won four state titles during his career.

York College basketball coach Matt Hunter knew that Frauenheim would end up on the sidelines after his career ended because of the role models in his life.

“He was always kind of wired that way,” Hunter said of Frauenheim, who was a solid player for the Spartans, but not a star. “For better or for worse, when you grow up in a house where your father is a coach, you tend to lean that way. You just grow up in a gym and see the game a little differently listening to your dad talk all the time.”

Family ties: In addition, to his dad and grandfather, Frauenheim got a little help from another family member. His uncle works in the athletic department at Kentucky and knew Frauenheim wanted to get into coaching.

An interview was set up for Dec. 6, 2018, when Kentucky had an off day in New York before playing Seton Hall University. Frauenheim and York College played The University of Scranton in York on Dec. 5 and then Frauenheim made the drive to New York for the meeting the next day.

After a number of conversations, he landed the internship and headed to Kentucky after graduation.

Hard work paid off: Over the summer, Frauenheim worked a number of basketball camps that Kentucky hosted as a counselor and learned how to operate the video software the team uses to produce material for coaches and players to study.

Hunter said that while Frauenheim wasn’t cutting up video for the Spartans as a player, Frauenheim spent extra time watching film and was a player he could turn to during games to predict what opponents would do. 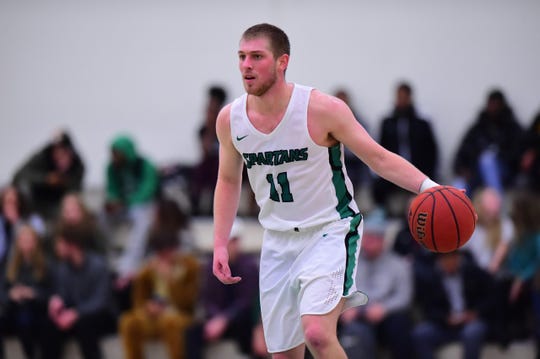 This familiarity with video and his knowledge of the software made Frauenheim a perfect fit when the Kentucky staff was looking to fill the graduate assistant role, which is primarily a video-based position.

During games, Frauenheim can be found next to the team’s video camera, logging player info and making video clips for the coaches to see postgame. He is also in attendance at every practice.

His weekly duties are focused on creating video scouting reports of opponents and helping the coaching staff with any videos they want to compile for the players. It was in this situation that Frauenheim got the feeling that, despite never coaching or playing at the NCAA Division I level, he belonged at one of college basketball’s elite programs.

An assistant coach asked him to make a compilation of hustle plays to show the players the importance of effort on the court and then the coach made his own. After they were done, the pair compared their videos and they had the exact same clips.

“That kind of moment is like 'OK, at least I kind of know what I am talking about,'” Frauenheim said. “That was kind of good for me personally to just be like, ‘OK, it is a much higher level of basketball than I am accustomed to, but I can see the game similar to these guys.”

Just the start: Although his coaching career has begun at one of the elite programs for a hall of fame coach in John Calipari, Frauenheim doesn’t expect to be just handed a job after his time with Kentucky ends. His focus is on learning from some of the best coaches in the sport to ensure that he makes the most of this dream beginning to his career.

“It doesn’t make sense to me that this is where I am starting, but I was given the opportunity and I have to really learn as much as I can and be able to use what I have learned,” Frauenheim said. “It’s definitely a tremendous opportunity for me, but at the end of the day, if  I don’t do a good job here then it doesn’t mean anything.”