The York College women's lacrosse team came up just short on Sunday in its bid for an NCAA Division III Final Four berth. 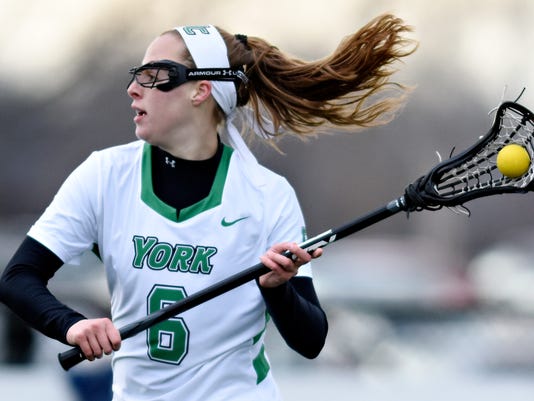 The York College women's lacrosse team came up just short on Sunday in its bid for an NCAA Division III Final Four berth.

The Spartans led by five goals in the second half but couldn't hold on in an 11-10 loss to Middlebury in Vermont in an Elite Eight contest.

York came into the game ranked No. 5 nationally in D-III by the Intercollegiate Women's Lacrosse Coaches Association, while Middlebury was No. 6

It looked as if the Spartans were headed to the Final Four for the first time in program history before Middlebury scored seven-straight second-half goals turn a 9-4 York lead into an 11-9 Middlebury advantage.

The Spartans finished at 15-5, while Middlebury improved to 19-2.

York advanced to Sunday's contest by earning a 13-6 win over Catholic University on Saturday at Middlebury. The Spartans avenged a 14-13 loss to the Cardinals on March 27 in Washington.

Fox finished her sophomore season with the most points on the team with 67 on 57 goals and 10 assists. Her 57 goals is tied for fourth in school history.

Nicole Clauter set a school record for draw controls in a season with 112. Clauter also had 29 caused turnovers, the fourth-most in a season. Kayleigh Phillips finished with 84, the third-most all-time

Wright's 152 saves is the fifth-most in a year and her save percentage of .524 is the best in a year all-time.