Penn State basketball coach Pat Chambers was suspended for one game by director of athletics Sandy Barbour after he shoved guard Myles Dread. 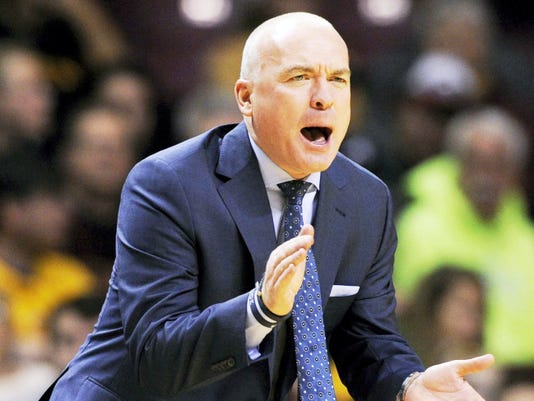 Penn State basketball coach Pat Chambers was suspended for one game by director of athletics Sandy Barbour after he shoved guard Myles Dread during the Nittany Lions’ 68-55 loss to Michigan on Thursday night.

The suspension will keep Chambers off the bench Sunday night when Penn State plays Wisconsin at the Bryce Jordan Center. Chambers apologized to Dread and his family.

“I absolutely love, love Myles Dread,” Chambers told USA Today after the game. “He committed to us as a sophomore. So I’ve known him forever, him and his parents. I apologize to him. I was just trying to challenge him, just trying to get the best out of him, and hopefully I’ll do it differently next time. No, not hopefully. I will do it a different way next time.”

Said Barbour in a statement: “Coach Chambers and I have spoken about what occurred during the Michigan game and he is very remorseful. His actions were unacceptable, which he recognized. His actions do not reflect the values of Penn State and the expectations we set for our programs and must not occur again.

“Pat and I agree his actions were unacceptable and he will be suspended for Sunday night’s game vs. Wisconsin.

Chambers’ statement said, “My actions were inappropriate; that’s not what Penn State stands for or what I stand for. I told Myles I was sorry that it happened. Sandy and I have spoken and agreed there are some things I need to address. I’ve assured her this won’t happen again and understand my actions come with consequences.”