Penn State football coach James Franklin is insisting that the spring was far from a lost opportunity on the road to improvement. 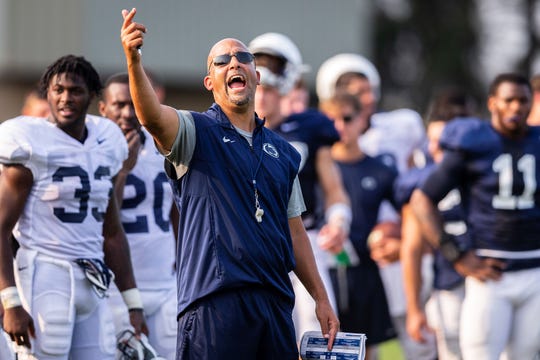 As college football eyes some kind of season kicking off in the fall, the reality is it’s May.

Spring practice never happened, and many programs who had theirs scheduled during the time states were shut down by the COVID-19 pandemic didn’t get the opportunity to answer some of the questions it had months ago, to execute the plans for improvement they’ve had since 2019 ended.

That includes Penn State, where head coach James Franklin’s program had its share of questions to consider. Namely, a new offensive coordinator, Red Land High School graduate Kirk Ciarrocca, instituting a new offense, several new assistant coaches getting to know players and each other, and battles at key positions like wide receiver and the secondary that would have taken several steps toward being filled had spring ball not been canceled.

Those questions remain largely unanswered in Happy Valley, but during a video conference with reporters last week, Franklin insisted the spring was far from a lost opportunity on the road to improvement.

In fact, he said some of it proved to be an even better experience than players might have otherwise gotten.

“I do think we’ve been able to get a lot more meeting time than you would normally get,” Franklin said. “Spring ball is a sprint. You go to a meeting and you’re sprinting to discuss what you need to get installed for that practice. Then you go out and try to execute it. It’s like a constant sprint. This (spring) is like, ‘OK, let’s talk through details. Let’s have a discussion. Let’s have a conversation. Let’s take quizzes and tests.’ I do think from a strictly learning perspective, this has been really good.

“The problem is there are physical aspects that we’re not getting.”

How Penn State players respond to that might ultimately determine the success or failure of their makeshift spring plans.

"Paranoid population:" Franklin said coaches are card-carrying citizens of what he calls “the paranoid population.” They live in a constant state of worry about whether they’ve taught the finer points of the playbook enough to enable players to execute it to its fullest, to be as good as they can be. Especially with a new offense, and even with three new position coaches, he said it will be a test to make sure players understand the nuances of all these differences at an acceptable level once the helmets are on. And they won’t know if that’s the case until they are.

“We have so many different types of learners,” he said. “There are guys who can learn on a computer screen. There are guys who need to learn by taking notes and getting up on the board and drawing the play. There are some guys who need the physical reps to learn. We try to teach using all of these teaching methods. Right now we don’t have them all. Some of our learners aren’t getting what they need.”

Staying in shape: Over the last few weeks, Penn State assistants have been cautiously optimistic their players have been staying in football shape during their quarantines at home. But they’ve all offered similar warnings; They can’t mandate anything, and they couldn’t enforce those mandates even if they could institute workout policies.

In other words, Franklin said, players are on their own, pretty much at the mercy of their own work ethic as well as their surroundings. Some can eat better at home than they do at Penn State’s training table; Others can’t. Others have workout equipment to use in their homes; many are making due with rudimentary supplies. He’s expecting some players will ultimately report back to campus at a higher weight than coaches want them to be, while others will be considerably lower.

“They’re making the best of the situation that they’re in and how they’re able to handle it,” Franklin said. “It’s a challenge, and it’s not one of those things that we can control. We try to support it as much as we possibly can, and that’s where the conversations are really important with our student-athletes and their families to find out what’s going on.”