Some Penn State football players have reacted strongly to Kirk Herbstreit's dire warning that college football will not be played this coming fall. 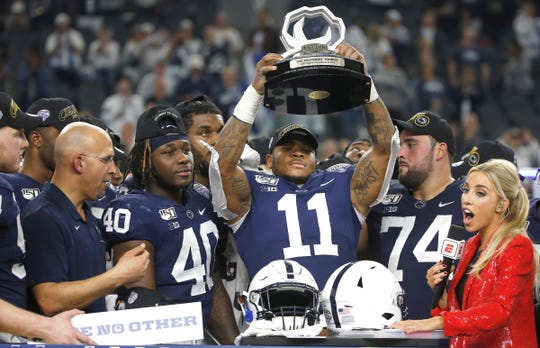 It was just one man’s opinion. And it wasn’t exactly coming from a medical professional.

But Kirk Herbstreit’s concerns about the fate of the 2020 football season in the midst of the coronavirus pandemic were enough to raise some eyebrows.

PSU players react: By Friday, Herbstreit’s comments were publicized by TMZ and spread to other outlets, prompting some reactions from Penn State players who are hoping to start their season as scheduled on Sept. 5 against Kent State at Beaver Stadium.

Star linebacker Micah Parsons had the most common response, writing simply, “No way!!!!” on Twitter. Parsons is headed into his junior season and is in line to be a high draft pick the following spring.

“Y’all better give me my season back if y’all do this,” senior defensive tackle Antonio Shelton wrote, adding some laughing emojis for levity. “I’m bout to rack these degrees up buddy.”

Of course, the truth is that no one has any answers at this point. And no matter how plugged in Herbstreit is to the sport, decisions will first have to be made by health and government officials before any sports are played.

“This is an additional measure to the previously announced cancellation of all conference and non-conference competitions through the end of the academic year, including spring sports that compete beyond the academic year,” the league said in a statement. “The conference also has previously announced a moratorium on all on- and off-campus recruiting activities for the foreseeable future.

“The Big Ten Conference will continue to use this time to work with the appropriate medical experts and institutional leadership to determine next steps relative to the COVID-19 pandemic. The main priority of the Big Ten Conference is to ensure the health, safety and wellness of our student-athletes, coaches, administrators, faculty, fans and media as we continue to monitor all developing and relevant information on the virus.”

Not that anyone was expecting football spring practices to still be held as normal. Like many universities, Penn State has canceled all in-person classes in favor of remote learning. The football program put all scheduled activities for the spring on the shelf, including canceling the Blue-White Game.

Players will need time to prepare: While it’s much too early to guess how the fall season itself might be impacted, coaches and administrators have begun to start talking about it during this period of lockdown.

One point Herbstreit made is almost certainly true — before any games can be held, players must be given proper time to ramp up and prepare for them.

“You don’t all of the sudden come up with something in July or August and say, ‘OK, we’re good to go,’ and turn them loose,” Herbstreit said.

PSU preparing the best it can: The Penn State coach said this week in a video call with reporters that he has started to have those talks with athletic director Sandy Barbour as well as his own staff.

“We actually just talked about that exact question (Wednesday) morning,’’ Franklin said. “So I’m having my sports scientist, my strength staff, the training staff, everybody getting together. Because the day before, I was having a conversation with (Barbour). We had the same discussion.

Injury prevention: Franklin said the main concern is injury prevention, but there are other factors as well, including how much time his coaches need to teach and install plays and concepts.

The Lions are breaking in four new assistant coaches this year, including a new offensive coordinator in Kirk Ciarrocca. And while the general scheme will be the same, there will be more changes than usual to deal with.

Penn State is trying to plan for several scenarios. But like everyone else in this situation across the country, it’s mostly guesswork.

No answers: Unfortunately, there are no answers at this point.

“It’s not knowing when this is going to end,” Franklin said. “It’s one thing if we could say, ‘OK, in two weeks, or in a month, we know this is going to be over and allow everybody to plan.

“That’s probably the thing, to me, that’s the most challenging and uncomfortable, because I want to be able to come up with a very specific plan that I could give our players and parents.”