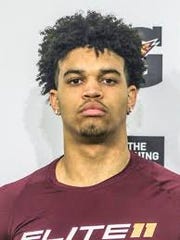 Williams, a high school junior at Gonzaga College High School in Washington, D.C., is the No. 1 quarterback in the country according to 247Sports, ESPN and Rivals.

The quarterback’s complete final five consisted of the Nittany Lions, Clemson University, LSU, the University of Maryland and Oklahoma. He announced the five schools in a tweet Monday afternoon.

The five-star quarterback has been posting updates about his recruitment in a blog for Sports Illustrated and explained why each school was included in the top five.

“Going on to Penn State, you can’t really beat 109k fans to go and support you each week in being loud no matter how cold it is up in the mountains,” Williams said in the blog. “Then Coach (James) Franklin is an awesome dude.”

The high school senior expressed gratitude for the position he’s in, but said he’s making the best decision for him when it’s time for him to commit.

“This has been a longtime coming,” he said in the blog. “Since freshman year I was recruited heavily and I’m thankful for that. Not many freshmen get recruited like I did but obviously this is business and I’m not playing around with my schooling and football career. These five schools were the best for me.”

Williams is listed at 6-foot-2, 209 pounds on his 247Sports profile and is a dual-threat quarterback according to all three recruiting sites. He totaled more than 2,600 total yards and 37 touchdowns through the air and on the ground as a junior, according to NBC Sports Washington, and was named the network’s Offensive Student-Athlete of the Year this season.

His accomplishments on the field and upside have led to lofty projections for his future. Brian Dohn, of 247Sports, evaluated Williams in September of his sophomore season and compared him to current Seattle Seahawks quarterback Russell Wilson.

Williams has not released a date when he will commit to a school, but has plenty of time to do so with the early national signing period opening in December. If he makes his decision soon, the junior quarterback will have to do so without making any more visits to his top five schools.

The NCAA has instituted a dead period because of the coronavirus pandemic, which prohibits recruits from having any in-person contact with schools. That eliminates any visits to schools and from coaches to a player’s high school or home.

The high school junior would be the highest-rated quarterback to sign with Penn State in the James Franklin era, if he were to do so. He wouldn’t enroll until the 2021 season, but Williams would potentially be competing with a redshirt senior Sean Clifford in his first year on campus and would have a clear path to the starting job after Clifford leaves. 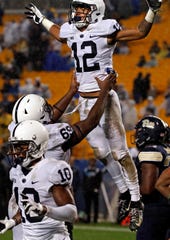 Hippenhammer no longer on football roster, reportedly focusing on baseball: Penn State wideout Mac Hippenhammer, a two-sport athlete who also played baseball the last two seasons, is no longer with the football team.

Hippenhammer, a rising redshirt junior, was not listed on the football team’s updated roster Monday afternoon. Lions 247 first broke the Hippenhammer news, while adding he planned to focus on baseball.

Hippenhammer first arrived in Happy Valley in 2017 after attending the same high school as two-sport athlete Rod Woodson, a Hall of Fame safety, at R. Nelson Snider in Indiana. He was a three-star prospect in football there, and he batted .431 as a high school senior.

At Penn State, where he always intended to play both sports, he was a situational football player and a starting baseball player. Although he got off to a slow start this spring season, starting in 13 of 14 games and batting .205, the speedy utility man batted .272 last season.

As a wideout for the Nittany Lions, he caught six balls for 103 yards and a touchdown in his redshirt freshman season. But, last year, he played in just eight games and caught one ball for 15 yards.

He was widely regarded as a longshot to see serious playing time this fall, even though he was among the team’s most-seasoned receivers.

Baseball appeared to be a different story.

“The biggest thing about Mac is he’s completely unselfish; he wants to do whatever he can to help the team,” baseball coach Rob Cooper told the Centre Daily Times last season. “I do believe if we had time to really work on his infield skills, I think he could be an elite shortstop. I really do.”