A physical Penn State team gave the fans what they've wanted during a sloppy 34-27 win vs. Indiana on Saturday. 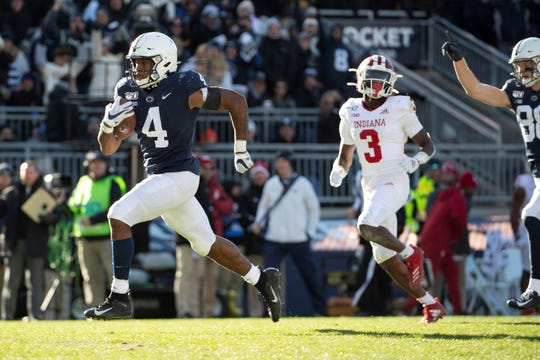 Much of this went the way it has gone all season for Penn State.

It made some big plays and missed some more. It stuffed the run, but struggled against the pass. It forced some key turnovers and, for the most part, protected the ball well enough. It did enough to win, even though it almost didn’t.

Then came that fourth quarter, and the incredible pile of moments that seemed completely out of character for this team. The moments that won the game. The moments, frankly, most Nittany Lions fans had been begging for since the James Franklin era began back in 2014.

In those moments, Sean Clifford looked like John Shaffer and Journey Brown churned out yardage like he was D.J. Dozier. Up front, Penn State pushed around an Indiana defensive front that had been up to the task until that point, and ran time off the clock with a bruising running game like they did when Joe Paterno roamed the sidelines.

Out of nowhere, a Penn State offense that didn’t string together more than nine plays during any previous drive Saturday afternoon and hadn’t topped a 15-play drive this season rattled off 18 plays to march downfield against the Hoosiers, just after they had pulled within three points to silence the Beaver Stadium crowd.

On those 16 runs, the Nittany Lions gained 60 yards, and milked most of the 9:01 they sapped off the clock during those critical minutes.

Before Saturday, Penn State’s longest drive of the season: 15 plays against Iowa, and that one only took 5:40 off the clock. Those last seconds against Indiana drained off it on Clifford’s 1-yard touchdown run on fourth-and-goal, which effectively sealed No. 9 Penn State’s 34-27 win. It gives the Lions a shot to play for the Big Ten East Division championship next week against Ohio State in Columbus.

Attitude, not result, was key: The result isn’t the real story.

The attitude Penn State showed on that drive, on an otherwise sloppy November afternoon, is what this team has to build on if it has a chance to upset the Buckeyes.

“To be honest, though, I had no idea it was that many plays. You’re running the ball, and the clock just ticks, ticks, ticks.” 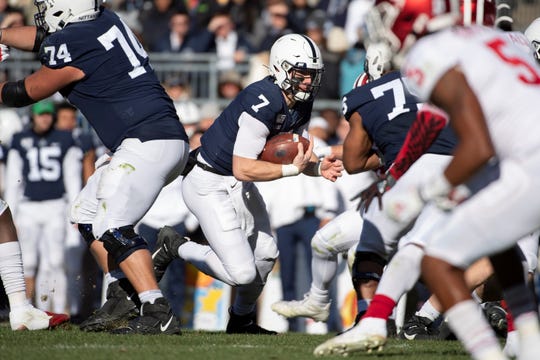 Franklin has been sensitive to criticism: Franklin has been sensitive in recent weeks about criticism of some aspects of the way his team has played this season, and part of that is understandable. After all, he has a team that many figured would lose three, maybe four, times this season at 9-1, and while a win against Ohio State next week remains no small task, it would put the Nittany Lions on the fast track to Indianapolis for the Big Ten Championship Game. This is a team ahead of schedule by any measure, and the easy argument to make against criticism is that it’s tantamount to nit-picking.

Criticism is fair when it’s backed by history, however, and the one thing that has been consistent with Penn State’s offense since 2016 is that its running game hasn’t always been physical. It has had chances to salt away leads over the years late in games against strong opponents — namely the Buckeyes and Michigan State — and failed to stay on the field.

In the first eight games, Penn State’s most time-consuming drive came in the opener against Idaho, a second-half plodder in which they had the lead against a physically inferior opponent and took 5:51 off the clock. This is a team that didn’t have a drive that drained more than 2:39 against Buffalo earlier this season.

Unthinkably, the Nittany Lions didn’t have a drive against Michigan that lasted more than six plays. But in each of the last two weeks, they’ve had a time-consuming drive. They got a field goal out of a 9:38 drive at Minnesota on Nov. 9, and the epic march down the field against Indiana came at the most critical of times for Penn State, when all the momentum seemed to be on Indiana’s sideline.

How have the Nittany Lions changed things up? By, in a way, giving the people what they want, Franklin said.

Getting more physical: Bowers said the running game felt like it took a turn toward the physical in the closing minutes of the Iowa game, when Penn State ran freshman running back Noah Cain over and over again. He picked up a first down, forced Iowa to use its timeouts, and the Nittany Lions ran out the clock on a 17-12 win.

That’s also the game where Franklin started raving about the 12-personnel packages the offense started to run more often.

They feature two tight ends, and there’s a good chance that by this time next year, Pat Freiermuth and Nick Bowers will be on NFL rosters. So in a way, it was Penn State making good on a positional strength.

Franklin said they’re such good receivers that the Lions don’t lose anything by removing a more traditional wideout to play them both. They’re good enough blockers that they enable offensive coordinator Ricky Rahne to add some layers of sophistication to the running game outside of the zone reads.

“Two years ago, it was very important to me – not just for the offense but for our program – that we have some 12 personnel in our package,” Franklin said. “The reality is, it’s also what everybody really wants, since I got here. It’s essentially a … fullback.”

Begging for a fullback to be reintegrated into the offense has become every bit the Penn State tradition as the blue-and-white uniforms, and doing so in a new way has given Penn State some of the physicality it has needed in its running game. Slowly, it has become a big part of the offense.

They’re sure going to need it next weekend with a shot at getting where they want to be.