Pat Freiermuth put together a record night on Saturday with a three-touchdown effort at Michigan State. His Penn State teammates weren't surprised. 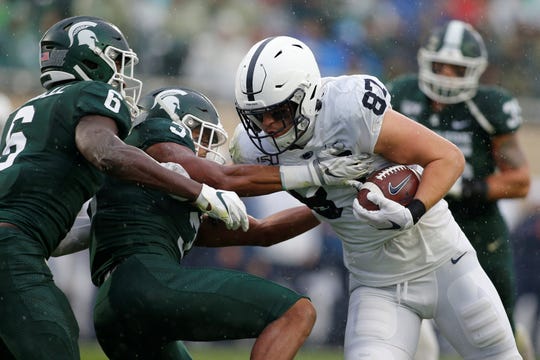 The humble sophomore — an even-keeled player who prides himself on never getting too high or too low — finished Saturday’s game against Michigan State with five catches for 60 yards and three touchdowns. It was the first time in program history a tight end reeled in three scores.

Freiermuth also tied former Nittany Lion Mike Gesicki’s all-time career mark for touchdowns by a PSU tight end (15). In 25 fewer games. But the Massachusetts native also didn’t so much as grin in the moments following the 28-7 victory and, when those stats were recited to him in the media room, he seemed less impressed than the reporters asking him the questions.

“It means a lot,” he said matter-of-factly.

Teammates impressed: His teammates were a bit more forthcoming.

“He’s the best tight end in the country, and I feel like you guys haven’t even see as much of him as you should have,” defensive end Jayson Oweh said. “It’s really impressive what he does.”

Said quarterback Sean Clifford: “He was playing really well all-around, so kudos to him. He played a hell of a game.”

Freiermuth provided the knockout punch to this offense, coming up with three clutch touchdowns in the first three quarters. His first came on a nice arching pass from Clifford, where he zoomed past a confused defensive back for the 16-yard score. His last came early in the third quarter, on a 6-yard play-action pass where Sparty’s defense didn’t stand a chance.

But it was his second touchdown that he called his favorite. And, OK, he might’ve even smiled a little bit while recalling it. The only time he smiled — after bowling over three defenders to complete the 19-yard score.

“I was kind of having flashbacks to Iowa, not going to lie, with the knee down and everything,” he said. “So I was like, I have to get in this time. So I got in. It was good; I was happy.”

Freiermuth caught the pass 4 yards shy of the end zone. Michigan State sophomore Xavier Henderson hit him immediately, but he could barely slow down the 6-foot-5 player. Then all-conference safety David Dowell came in to assist on the tackle, but Freiermuth lowered his shoulder and got past him — right before backup cornerback Shakur Brown came in from the side in a last-ditch effort.

The 256-pound tight end celebrated by crossing his arms in the end zone while his teammates surrounded him and smacked his shoulder pads. They weren’t surprised by his physical play.

“Have you seen his legs?” cornerback Tariq Castro-Fields asked with a laugh. “I’m not surprised.”

Physical presence: Freiermuth’s reputation in high school was as a physical presence, one who treated defensive backs like bowling pins. But Freiermuth admitted he shied away from that physicality last year; it wasn’t until this year, after an intense offseason, that he felt comfortable taking on a handful of defenders.

“I was just happy to bowl people over and get physical,” he said of Saturday night’s effort.

Freiermuth’s performance came just a day after his 21st birthday, which he celebrated by doing five or six shots — of non-alcoholic tart cherry juice because it “helps muscle relaxation” — with his teammates.

Most members of the team said Freiermuth didn’t seem to mind spending his birthday on the road. He’s a low-key guy, they said, and even Freiermuth acknowledged he doesn’t need much — whether it’s on the field or off.

During the game, he tries to keep away from everyone. He doesn’t want to get amped up — “That’s just a wave of emotions I personally can’t deal with, so I just stay even,” he said — and he never gets too down on himself.

Among best ever at PSU? However he manages his emotion, it’s working. With his production, Freiermuth is already making a case to be considered among Penn State’s best-ever tight ends. He can catch, he can block, and he can lead.

He can do it all, whether no one’s paying attention or whether the entire nation’s watching.

“He’s one of those guys,” defensive end Shaka Toney said. “He doesn’t need much, even a little attention. He’s just going to come out and ball.”