After that, the Lions’ locker room exploded for 15 minutes, music blaring, pink towels flying. Penn State had just endured a night of torment at Iowa’s Kinnick Stadium — some self-inflicted, some induced by officiating — and emerged with a 17-12 victory.

That win moved PSU up to No. 7 in the latest Associated Press Top 25 poll. It also capped a week which Penn State could have allowed to steer it off course. But, as the offense did late against Iowa, Penn State ended the week on its terms. Then it left with a starburst.

“I don’t know if you guys have ever seen the movie ‘Soul Plane,’" Franklin said afterward. "We’ll be partying like ’Soul Plane’ the whole way back to State College."

Penn State changed multiple narratives this week. One held social significance, one might have altered how people outside the fan base view the team and one simply proved that the offense can run the ball when necessary.

Now the Lions are 6-0 (for the second time under Franklin) and are generating plenty of attention across the country. That will be magnified again next Saturday, when Michigan (and ESPN’s College GameDay) visit State College for another marquee game.

Outside the program, things are getting bigger. Inside, Franklin continues to make the game as small as possible. But the coach hinted Saturday that he senses something special happening.

“Although we’ve got a young team, one of the younger teams I think in college football, we have a mature approach,” Franklin said. “… I’ve been doing this 24 years. I’ve been around some good teams, some good programs and I’ve had some pretty good years. [This situation] is good. It really is. It’s good. We’ve got to keep it going.” 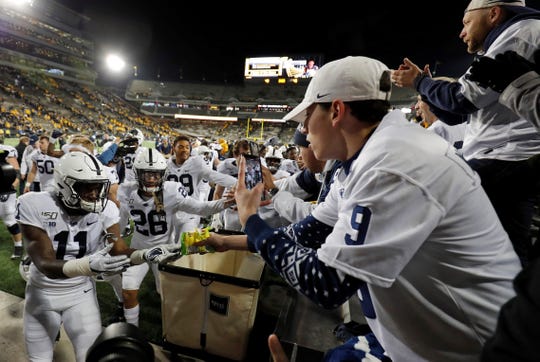 Letter controversy: Penn State’s week began Monday, when several players showed a letter to the world that was sent to safety Jonathan Sutherland. The sender judged Sutherland, a team captain, by the length of his hair, and players wondered why.

On Tuesday, Penn State harnessed the letter’s negativity to make it a positive. More specifically, Penn State’s football team did that.

Penn State University’s response was organizational and reactive. “We strongly condemn,” the university said, offering a “range of assistance and resources” for those who need support.

Franklin’s response was human and proactive. “This is my football,” he said, describing a locker room dotted with different personalities and brimming with humanity.

And Sutherland’s response was humble. “At the end of the day,” Sutherland wrote, “without an apology needed, I forgive this individual because I’m nowhere close to being perfect…”

Getting HBO coverage: On Wednesday, Franklin’s team got an hour-long promotional video from HBO’s 24/7 College Football program that took a fond look at the team’s prep week for Purdue.

Franklin shared his core-values message of competition and sacrifice to a national audience, some of which likely viewed Penn State football with fresh eyes.

Before the show aired, Franklin said that a show focusing on Penn State like this wasn’t possible a few years ago. “Obviously, we were in in a different point as a program,” he said.

Franklin said “family” and “appreciate” at least a dozen times. He watched Thursday Night Football with his wife and daughters. It was magnificent point of sale for Penn State. Any parent of a recruit watching that was given a window onto the coach’s paternal promise.

But Franklin said the team didn’t watch the show together, hoping to prevent it from shifting their attention. Many watched, some didn’t and linebacker Cam Brown said he fell asleep before it even aired.

Surviving adversity to beat Iowa: That led to Saturday, when Penn State ran straight into its own offensive inefficiency and a headwind of officiating decisions. Quarterback Sean Clifford said that he should have been benched during his 0-for-5 start that included a fumbled snap.

And Franklin held a stiff jaw and thin smile when asked about a second-half series on which Penn State reached the end zone three times without scoring a touchdown. Among those was tight end Pat Freiermuth’s 16-yard completion that initially was ruled a touchdown but then overturned.

Penn State led 10-6 after settling for a field goal but seethed inside. And that moment could have broken the group. Instead, it galvanized them — as some speculated might happen after the letter went public this week.

Penn State countered with a fourth-quarter interception (by first-year safety Jaquan Brisker) that was forced by defensive tackle Robert Windsor — he of the three-fish-sandwich performance on HBO.

Cain helps team clinch win: After that, the Lions turned over their offense to freshman running back Noah Cain, who rushed for 67 of his 102 yards in the fourth quarter. That included a 5-yard touchdown run and a critical first down on the team’s last series to run out the clock.

Penn State has had trouble ending big games on its own terms the past few years. Ohio State and Michigan State come to mind. This time, Penn State dictated those terms.

After the game, Clifford was hoarse and happy. He had highs and lows, as Penn State did this week, but left Iowa wearing a huge smile under his running eye black.