Penn State fans overreacted to a 79-7 win against Idaho last week. This week, they’re going to under react to a 45-13 win over Buffalo. 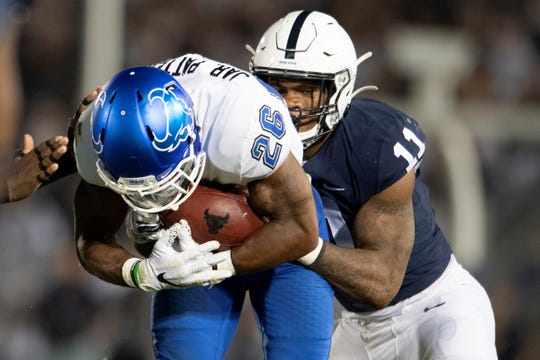 This week, they’re going to under react to a 45-13 win over Buffalo.

Perhaps, that’s par for the course.

But a few facts should be settling in by now, a few days after the Nittany Lions kicked themselves in their collective backsides at halftime and outscored the Bulls, 38-3, in the third and fourth quarters on a perfect Saturday night at Beaver Stadium. Let’s go through them in order of importance:

►It’s never, ever, a good idea to buy into beating up on a Football Championship Subdivision opponent in late August.

►Repeat: It’s never, ever a good idea to buy into beating up on a Football Championship Subdivision opponent in late August.

►The Nittany Lions aren’t overflowing with young, untapped talent that is ready for the big time, the bright lights, and the Big Ten championship race.

►Their young running backs are gifted. They aren’t outlined against a gray-blue sky, Stuhldreher, Miller, Crowley, and Layden, or Famine, Pestilence, Destruction and Death or anything Grantland Rice would type home about just yet. They’re raw players with special skills who still need experience and development and to find their respective niches.

►The defensive line is solid and freakishly athletic and potentially a game-breaking unit. But they’re hardly the guys playing in Tuscaloosa.

►Penn State can still be really good. Scary good. Once they figure this all out.

All of those can be true, together. And maybe, the last can only be true because the facts that came before it are, too. 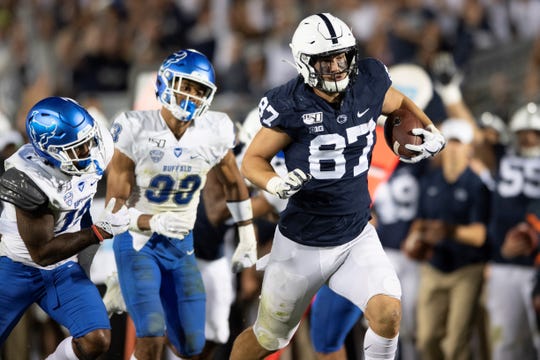 A tale of two halves: For a half against a Buffalo team that looked every bit like a 10-game winner from a year ago, the Nittany Lions looked overmatched and overwhelmed. They were pushed around like rag dolls by the Bulls’ offensive line. Their short passing game was punished by Buffalo’s hard-charging safeties. The Bulls, rather unthinkably, nearly finished the first half with more total plays (46) than the Nittany Lions offense had total yards (59).

For another half against the Bulls, Penn State looked like a force to be reckoned with on a national level again. After halftime, quarterback Sean Clifford completed 10 of 14 passes for 220 yards and three touchdowns. Pat Freiermuth, the massive Nittany Lions tight end, took over the game by catching seven passes for 100 yards and a pair of scores. The defense forced four punts, John Reid intercepted a pass and returned it for a touchdown, and held the Bulls to one measly field goal.

Simply a tale of two halves, the best of performances and the worst of performances? A team that wasn’t ready to play and got overwhelmed by a ready, better-than-they-thought opponent? Or, something that would be a little more obvious if the Buffalo game were the opener and the Idaho thrashing come in week two?

A matter of youth? Maybe, Penn State is just young, and looked it. The Nittany Lions have a sophomore quarterback making his second career start who, twice, has settled into games after rocky starts and performed well. Young running backs didn’t make the most of their chances, as a whole. Young defenders in the front seven got caught out of position at times against a veteran offense with a game plan clearly designed to take advantage of their aggressiveness.

As with most young teams, Penn State figured it out when they were told what to do and overwhelmed Buffalo with their size, speed and athleticism.

Making adjustments: Safety Garrett Taylor, a senior starting at safety for the second consecutive season, said adjusting on the fly is something the veteran defenders do try to accomplish.

When they come off the field after a series, he said, defenders will talk to each other about what they saw on the field, then get input from position coaches and defensive coordinator Brent Pry on which way to go from there.

“Once we hear what the coach saw and we tell them what went on, we try to make corrections off of that,” Taylor said. “I think we do a pretty good job of doing that defensively. We’ve got to just make it an every-game thing.”

They need to make it an every-quarter thing.

Great teams do it. Ohio State has consistently won the Big Ten trading off a plan of attack that didn’t work early for one that engulfed teams late. That team has been Penn State a few times, you might recall.

“It’s just watching tape and getting better, learning how to adjust,” Clifford said. “We just haven’t faced adversity like that, and I think it was all good for us to be pushed like that.”

Talent will not be enough: By the end of the night, Penn State had won rather convincingly. A glance at the scoreboard shows the anticipated blowout, and maybe that’s what’s important in the end.

But Penn State went into the locker room down, 10-7, and was lucky it wasn’t a lot worse than that.

It wasn’t, because they’re so gifted.

But if those gifts don’t turn into application before too long, it will be worse than that. A team with more skill would have beaten Penn State on Saturday, and not necessarily because it had more talent.

Dryden quote: One of the great, underrated quotes about sports comes from the former Montreal Canadiens goalie Ken Dryden who, before the Miracle on Ice game between the United States and Soviet Union at the 1980 Olympics, commented that it’s one thing to be young and talented and quite another thing to be good.

As much as games like this might force fans to dip into the antacids, they’re the ones that turn young teams like Penn State into good teams. If they’ll let them.