Ex-PSU QB Matt McGloin starting next phase of career, but still not giving up NFL dream

Former Penn State quarterback Matt McGloin will never relinquish the NFL dream, even a year after he last lived it.

Ex-PSU QB Matt McGloin starting next phase of career, but still not giving up NFL dream 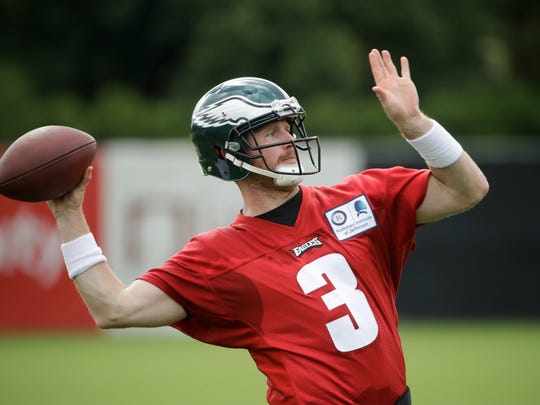 STATE COLLEGE — Matt McGloin will never relinquish the dream, even a year after he last lived it.

He’s pushing 30 now, far past those glory years at Penn State, never mind the ones where he captivated the region’s imagination as the star quarterback at West Scranton. A year ago, he was in Kansas City Chiefs camp, pushing for a job as Patrick Mahomes’ backup and, he knew, to keep his career in the National Football League alive. But when the Chiefs cut him from the active roster a day before their season opener, he started to think about the future.

Saturday, another step toward that future manifested itself, on the same field that was such a big part of his past. McGloin returned to Penn State for the annual football media day, doing some podcasting work in the field he studied to enter during his time as a student at the university,

“I majored in broadcast journalism here at Penn State, and once the phone stops ringing, once the NFL stops calling, it’s time to put my degree to work,” McGloin smiled, just moments before trotting away to interview Nittany Lions backup quarterback Will Levis. “It’s something I’ve always been passionate about, ever since college. It’s something I’ve always wanted to get into. So, that’s why I’m here today with you guys, on the other side.”

Legend status: McGloin entered legend status in Happy Valley after leading the historic 2012 Nittany Lions, still under the cloud of scandal and potential sanctions from the NCAA, to an 8-4 record. That team, under first-year coach Bill O’Brien, is largely credited for steadying the program during a tumultuous time, and McGloin’s tenacity under center became symbolic of the program entering a new era.

He threw for 3,271 yards and 24 touchdowns that season, and the seven starts he made during a four-year career with the Oakland Raiders are the most a former Penn State quarterback has made in the NFL, by far, since Kerry Collins entered the league in 1995.

However, McGloin insists he felt just as home on the other side of the interviews Saturday as he did scanning opposing defenses.

“I can talk football all day, every day, and that’s really the part of it that I enjoy,” he said. “I enjoy being able to talk to these coaches. I’ve been in the position these players are in, so being able to hear what their mindset is is always exciting, because I went through the same things. It’s just fun, man; being on the field, being able to talk football. We’re lucky. It doesn’t get better than that.”

A phone call away: As for the future, McGloin said he still works out daily, still throws footballs around like he’s a phone call away from being in the NFL again. Which, technically, he is. He doesn’t think that feeling will ever go away, considering he has been playing football since he was 5.

But, he admitted he approached 2018 like it would be “one more run in the NFL.” And when it ended, he had a sense it was time to move on.

“It’s not an I-can’t-live-without-it type of thing,” he said. “I just enjoy being around the game.

“I’m the type of guy that, the glass is half full. I thought I was going to play for 10-15 years; I really did. But that wasn’t my path. That’s why you graduate. I have a degree from this great university, and I’m planning to put it to work now.”