Penn State-Michigan game has $240 ticket, making it most expensive ever for Beaver Stadium

Tickets for the 2019 Penn State-Michigan football game will cost as much as $240, making it the most expensive ticket in Beaver Stadium history.

Penn State-Michigan game has $240 ticket, making it most expensive ever for Beaver Stadium 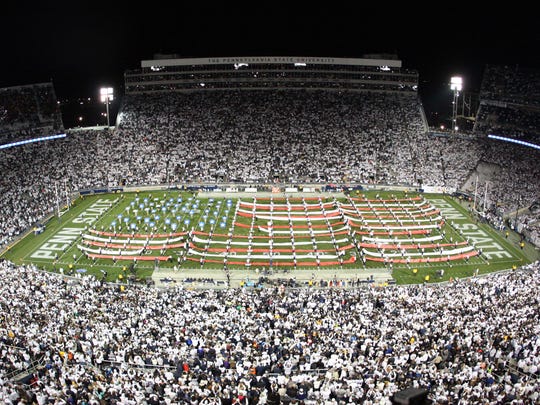 Beaver Stadium is shown here in a file photo. The Penn State-Michigan game, set for Saturday, Oct. 19, will have tickets that sell for as much as $240, making them the most expensive tickets in Beaver Stadium history. (Photo: Joe Rokita, Joe Rokita / JoeRokita.com)

Penn State is setting a football ticket-pricing record for the second consecutive year.

Single-game tickets for the 2019 home schedule go on sale to the public Tuesday, with the Oct. 19 game against Michigan reaching a a new mark. The best seats cost $240, making them the most expensive tickets in Beaver Stadium history.

The price is $15 higher than the top tickets for last year’s game against Ohio State, which previously held the Beaver Stadium record. Prices for the Penn State-Michigan game range from $120-$240. Penn State has used a variable-pricing method for football tickets since 2014.

Penn State said that tickets for the Michigan game have been in high demand through pre-sales for members of the Nittany Lion Club, with only single seats available. A limited number of tickets are available for the Sept. 14 game against Pitt as well.

That’s a change from two years ago, when tickets for the Pitt and Michigan games were not available during the public sale.

Single-game tickets for the 2019 season go on sale at 10 a.m. Tuesday. Prices range from a low of $40 (the least-expensive seats for the Sept. 7 game against Buffalo) to the $240 ticket against Michigan.

Tickets for the Pitt game range from $100-$210. Other prices include the following: