Two Penn State football players were cited Monday for disorderly conduct after police said they were involved in a fight at a fraternity. 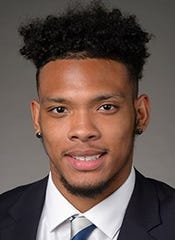 Two Penn State football players were cited Monday for disorderly conduct after State College police said they were involved in a fight at a university fraternity that sent four people to the hospital.

Junior cornerback Tariq Castro-Fields and redshirt freshman wide receiver Henry Fessler were “observed fighting with others on the front yard” of Delta Chi about 1:45 a.m. Jan. 27, according to the citation.

Neither has entered a plea. The incident is no longer under investigation and no other citations were filed, police said.

“This case was extensively investigated based on video evidence that was obtained from the scene,” borough police Lt. Keith Robb said. “What we looked at was, No. 1, who we could positively identify from the video; and No. 2, whether the person that we identified is actually engaging in what we would consider criminal behavior.” 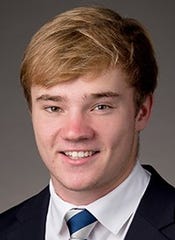 A conflict between members of the fraternity and the group of football players, who went the fraternity to “further the altercation,” preceded the fight, Robb said. Police worked alongside university athletics and compliance officials to identify those involved in the “large fight.”

“Yes, there were several groups involved in what I would consider fighting behavior,” Robb said. “What I recommended, and what the detective filed on, was who she could positively identify in the video. From that group, there was only two individuals that she could 100% identify and who were engaged in that type of fighting behavior.”

Penn State conducted its own investigation into the fight and, citing federal law, declined to comment on individual student discipline, according to a statement from university spokeswoman Lisa Powers.

The fraternity members who were sent to Mount Nittany Medical Center were treated and released. While they required hospital treatment, Robb said the injuries were not major.

Castro-Fields, 21, of Maryland, played in all 13 games for the Nittany Lions last season and made his first career start against Pittsburgh. He tied for third on the team with seven pass breakups.

Fessler, 20, of Erie County, is a walk-on and redshirted his freshman season.