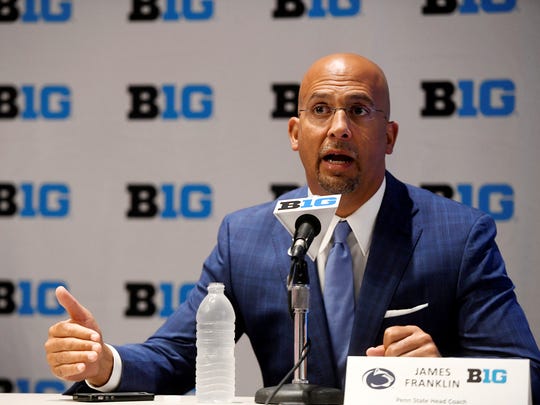 James Franklin and his staff had a fine start to their weekend.

The news ends what, at least on the outside, seemed like a three-week recruiting crisis for the Nittany Lions.

Julian Fleming — Pennsylvania’s No. 1 prospect in 2020 — spurned Penn State in favor of Ohio State on May 31. Four-star offensive lineman Grant Toutant, the Nittany Lions’ first commit of the 2020 cycle, bolted for the Buckeyes on June 9. And in the days following, four-star tackle Aaryn Parks and four-star cornerback Josh Moten re-opened their recruitments.

As of Friday afternoon, Penn State’s class ranked No. 27 in the country, according to 247 Sports. That mark sat behind five Big Ten schools — including Minnesota and Northwestern. But thanks to Dottin and Brown’s decisions, the Nittany Lions ought to get a bump in the rankings.

Brown, who tallied 40 tackles and five interceptions in 2018, is the latest Lackawanna College product to pick Penn State. He joins teammate Norval Black in the Nittany Lions’ 2020 class after former Falcons lineman Anthony Whigan and safety Jaquan Brisker signed in the 2019 cycle. Brown had offers from Maryland and Kent State.

Meanwhile, Dottin had offers from 12 programs, including Michigan and Michigan State. The 6-foot-3 receiver from Suffield Academy (Conn.) is the No. 44 wideout in the country and the No. 243 prospect overall. He’s the fourth top-300 prospect to pick Penn State this cycle, joining linebackers Curtis Jacobs and Derek Wingo and defensive tackle Cole Brevard.

While Dottin and Brown certainly bolster Penn State’s recruiting efforts, the Nittany Lions might not be done this weekend. Franklin and his staff are hosting their final recruiting event of the summer before the dead period begins Sunday.

More commitments wouldn’t be out of the question this weekend.