George Campbell — a former five-star recruit and Florida State wideout — announced that he will play his final year of eligibility for Penn State. 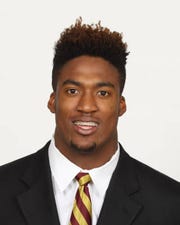 Penn State saw its fair share of players leave via the transfer portal this offseason. But on Wednesday, the Nittany Lions were finally on the receiving end of a departure.

George Campbell — a former five-star recruit and Florida State wide receiver — announced that he will play his final year of eligibility in Happy Valley. Campbell, who caught 13 career passes for 206 yards in Tallahassee, is expected to graduate from Florida State in the spring and be ready to join the Nittany Lions for the 2019 season.

“It’s no secret that the last four years have been full of highs and lows for me, but I’ve always been told that ‘tough times don’t last, tough people do,’” Campbell wrote in an Instagram post. “While I will forever be grateful to Florida State for the opportunity to be a Seminole, I am excited to take the next step in my journey. ... I am thrilled to be a part of the Nittany Lion family and am thankful to the coaching staff and players for accepting me with open arms.”

At least some of the lows Campbell wrote about refers to his injury history. The No. 19 overall high school prospect in the 2015 cycle, per 247 Sports, didn’t have much luck staying on the field at Florida State. He redshirted in 2016 after contributing on special teams as a freshman, suffered a season-ending injury in 2017 and played in only seven games last year.

However, there’s still hope for Campbell if he can stay fit. Now the eldest member of Gerad Parker’s WR room, Campbell is a 6-foot-4 target who ran a 4.36-second 40-yard dash and logged a 37-inch vertical jump prior to joining Florida State. According to his 247 Sports’ high school scouting report, Campbell “does a nice job of using his size to his advantage, especially with the ball in the air. He possesses outstanding ball skills and hand-eye coordination. He can box out and high point the ball.”

Whoever starts at quarterback in 2019, Tommy Stevens or Sean Clifford, already had an abundance of talent to target. Campbell only adds to that.