If it seems tough to believe that Trace McSorley played the second half of the Citrus Bowl earlier this month on a broken right foot, you’re right. 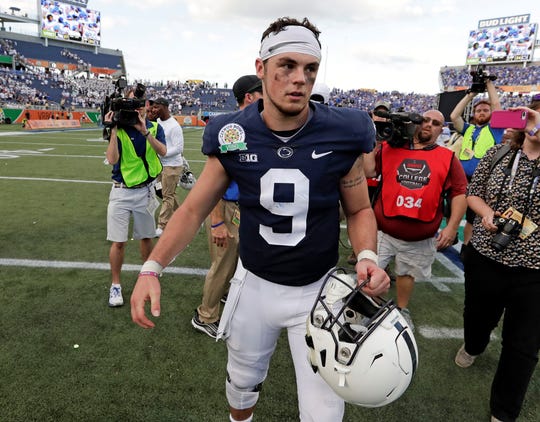 Penn State quarterback Trace McSorley walks off the field after losing to Kentucky in the Citrus Bowl on Tuesday, Jan. 1. McSorley injured his right foot in the game, but he says the foot now feels "really good." McSorley is practicing for the Senior Bowl this week. (Photo: John Raoux, AP)

If it seems tough to believe that Trace McSorley played the second half of the Citrus Bowl earlier this month on a broken right foot, you’re right.

That’s what the former Penn State quarterback is telling scouts and reporters this week down in Mobile, Ala., where he is preparing to play in Saturday’s Senior Bowl.

“I’m feeling really good,” McSorley said in a Denver radio interview on Tuesday morning. “It got put out that it was a broken foot. That was before we even got X-rays, and that took on a story of its own almost. But I’m all good.”

McSorley was on the sideline for Penn State’s first drive of the second half against Kentucky in visible pain as he moved. With backup Sean Clifford in the game, a team spokesperson told reporters that McSorley’s foot was broken and he would not return, ending his career with the Nittany Lions.

A few minutes later, though, he was back out with the offense before running for one touchdown and throwing for another to pull the Lions within three points before the Wildcats were able to run out the clock.

After the game, both McSorley and coach James Franklin said they didn’t have any conclusive results on the injury, only that team doctors cleared McSorley to play if he could manage the pain.

Wants to prove he belongs: McSorley told the NFL Network that his foot began to feel better in “days, not weeks” and that he had not suffered a fracture. He said he is training for the combine in Fort Lauderdale along with Washington State’s Gardner Minshew.

So McSorley participated in the Senior Bowl’s first practice on Tuesday. He is one of four quarterbacks on the North team along with Duke’s Daniel Jones, Missouri’s Drew Lock and N.C. State’s Ryan Finley. Penn State teammate Amani Oruwariye is also on the North roster as a cornerback.

“I want to come in here and prove I belong with these guys,” said McSorley, who is projected as either a late-round pick or a priority free agent in early draft evaluations. “I wholeheartedly believe that, and I want to prove to everyone else that I belong and I’m with the best of the best.”

Comes in at just more than 6 feet: What he has to battle are his measurables. At Tuesday’s weigh-in, McSorley checked in at a hair over 6-foot, 200 pounds, the smallest of the eight quarterbacks in the game.

Along with a strong showing this week in Mobile, the Virginia native is banking on teams being less prejudiced against small signal-callers with the success of Baker Mayfield as a rookie.

Not surprisingly, McSorley spent his media session talking up his intangibles, hoping to draw some comparisons to Mayfield, the former Oklahoma Heisman winner and No. 1 overall pick of the Cleveland Browns.

“I think my leadership is something that was able to make me successful in college — my competitiveness,” McSorley said. “Coming in and competing with whoever had the job or whoever I was going against, I was always out there competing and trying to get better. And my guys believed in me. That was something I was able to take and turn into a lot of victories in college and give myself and my team a good career.”

Unlike Hackenberg, McSorley on good terms with Franklin: The Athletic reported that the New York Jets met with McSorley at the event’s hotel before practice on Tuesday. The Jets, of course, drafted McSorley’s predecessor at Penn State — Christian Hackenberg — in the second round in 2016, only to cut him two years later.

Whereas Hackenberg left the Lions on rocky terms with Franklin — the former five-star recruit infamously thanked just about everyone but the head coach when he declared for the draft — McSorley has gone the opposite route.

“Coach Franklin was instrumental in my recruitment and me being there in the first place, his belief in me as a quarterback,” McSorley said. “I think we were able to grow that relationship over five years. I was there for a long time, and almost by the end of it, I was trying to be an extension of the coaching staff as a quarterback on the field.

Another chance for Brown: Medically retired at Penn State, Torrence Brown isn’t giving up on football.

The veteran defensive end has missed the better part of the last two seasons while recovering from a serious knee injury. Now he will look to use a medical hardship waiver to get a sixth year of eligibility to play at Southern Miss.

“I’ve been through so much, but I’m a firm believer that God gives the hardest battles to his toughest soldiers,” Brown wrote Tuesday on Twitter. “I want to thank my family for being there for me at all times and loving me unconditionally. I want to thank Coach Franklin and the Penn State staff once again for the opportunity of a lifetime at a great university where I was able to get my degree and change the direction of my family.

“After a whole lot of prayer and conversations with ones closest to me, I have decided to play my last year of eligibility at The University of Southern Mississippi!”

Brown, a native of Tuscaloosa, Ala., was originally committed to Southern Miss out of high school. But a last-minute offer from Penn State shortly after Franklin took the job in 2014 convinced him to sign with the Lions without having set foot on the campus.

He opened the 2017 season as a starter at defensive end before being carted off in a Sept. 16 game against Georgia State at Beaver Stadium. He has not played since.

The former State College Little Lion, who walked on at Penn State, will be on scholarship at “The Rock” with four years of eligibility.

“Brandon’s a great kid, and he had a great experience at Penn State and loved it,” State College coach Matt Lintal said. “I think it’s a great move. I think it’s a nice fit. He’s going to be utilized there from Day 1.”

There’s certainly promise for Clark to find a groove at the NCAA Division II program. The 6-foot-4 wideout recorded a team-high 51 catches for 851 yards and 16 touchdowns as a senior at State High, confirming why James Franklin and Brent Pry extended a walk-on offer in the summer of 2017.

After participating in the Big 33 game on June 20, 2018, Clark said he wanted to “show out” up the road at the Lasch Building. At the time, his father, Bruce, a Penn State letterman and two-time All-American defensive lineman, claimed that his son is a “much better athlete” than he was.

But Clark never got the chance to prove that with the Nittany Lions after reportedly tearing his ACL in July. The wideout suited up for practices throughout the season and traveled with the team to the Citrus Bowl but did not see any action.

John McGonigal of the Centre Daily Times contributed to this report.