Yet another Nittany Lion is leaving. Jarvis Miller, a veteran reserve linebacker, announced Saturday afternoon that he is transferring to UMass. 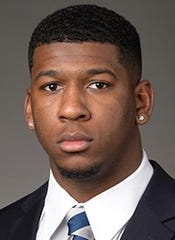 Yet another Nittany Lion is leaving Happy Valley.

Jarvis Miller, a veteran reserve linebacker, announced Saturday afternoon that he is transferring to UMass for his final year of eligibility. Miller, who graduated with a degree in criminology, will pursue his master’s at Amherst.

He is the ninth confirmed transfer in the first year of the transfer portal. Three others — safety Lamont Wade, tight end Danny Dalton and offensive lineman Alex Gellerstedt — are reportedly in the portal, too. And five others have declared early for the NFL draft, meaning that 17 total Penn State players intend to leave Happy Valley with remaining eligibility.

“The past four years have been the most amazing experience that a young man could possibly ask for,” Miller wrote in a statement on Twitter. “To the Penn State fan base, you are the best fans anyone could ask for.”

Miller’s decision to leave, at least, shouldn’t come as a surprise. The rising redshirt senior played in 11 games in 2018 but didn’t make much of an impact. While serving as Cam Brown’s backup at SAM, he recorded eight tackles, including one TFL against Appalachian State.

Brown continued to progress and became a leader for the Nittany Lions, so there was no chance for Miller to unseat him in 2019. If anything, Miller might have lost his playing time to younger teammates next year. Jesse Luketa and Ellis Brooks played primarily at MIKE but could move positions. Early enrollees Brandon Smith and Lance Dixon expect to make an impact right away, as well.

Miller finishes his Penn State career with 33 games played, 23 tackles, a sack and a fumble recovery.