Penn State has issued another counterfeit-ticket warning after more than 300 fans were turned away for the recent Beaver Stadium game vs. Ohio State. 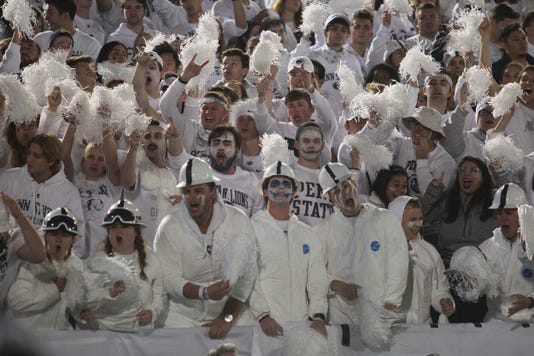 Penn State fans cheer during the game vs. Ohio State on Saturday, Sept. 30. The Lions lost the game, 27-26, at Beaver Stadium in State College. More than 300 fans were turned away from entering the game because they bought counterfeit tickets. FILE PHOTO(Photo: Joe Rokita, Joe Rokita / JoeRokita.com)

With the homecoming football game against Michigan State on the horizon, Penn State is warning those hoping to watch from Beaver Stadium again to be on the lookout for counterfeit tickets.

More than 300 counterfeit tickets were confiscated by Beaver Stadium ticket staff and Penn State police ahead of the Ohio State game on Sept. 29, according to a release from the university. Each of those people, who thought they had purchased legitimate tickets for the White-Out clash, were turned away at the door.

Fans are encouraged to only purchase tickets directly through the Penn State Athletic Ticket Office, or Ticketmaster, the only two authorized sources for home Penn State sports events, and to be cautious of tickets in the print-at-home format or illegally reproduced single-game tickets from unauthorized sources.

Penn State Athletics warned fans prior to the Ohio State game to be on the lookout, as law enforcement had become aware of counterfeit tickets in the marketplace.

“Fans purchasing tickets from unauthorized sources (including StubHub, Vivid Seats, Craigslist, EBay, and ticket brokers) assume the risk that tickets purchased are counterfeit or the barcodes have been invalidated,” the release read.

Anyone attempting to enter Beaver Stadium with a counterfeit or invalid barcode on their ticket will be denied entry, according to Penn State.

Penn State and Michigan State kick off at 3:30 p.m. on the Big Ten Network.